THE BIG FIGHTS KEEP ON COMING 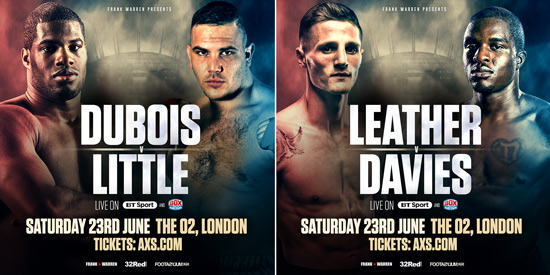 IT WILL NOT have gone unnoticed among the boxing fans who keep their eyes permanently peeled on the lookout for fight announcements that we were able to reveal a fistful of potential humdingers over the course of the last week.

The WBO world middleweight title defence by Billy Joe Saunders against Martin Murray at the 02 Arena on June 23 will now be handsomely supported by two contests that will certainly capture the imagination of the fight fraternity and beyond.

Nobody, surely, could ever accuse Josh Leather of being a protected prospect. The Guisborough super lightweight in his last two fights has taken on and defeated two real tough cookies in Philip Sutcliffe Jnr and Glenn Foot.

They were genuine tests that he passed with flying colours, although he did have to overcome some serious turbulence on his way to victory over Foot, who has since further demonstrated what he is all about by stopping the previously unbeaten and highly touted Jason Easton in Glasgow.

Now, for just his 14th fight as a pro, Josh had no hesitation in signing up for a dangerous assignment against the WBA International champion Ohara Davies.

It has got all the makings of an absolute cracker.

Ohara, for his part, isn’t messing about either and has categorically stated that he wants proper fights all the way after he has shaken off the cobwebs in Leeds a week on Saturday.

The winner won’t have to look too far when it comes to making the next move because we’ve also got Jack Catterall waiting in wings ready to join the party.

The big prize they all want a part of is Terry Flanagan, should the Turbo successfully become a two-weight world champion in Manchester on June 9.

Terry has ambitions of his own to unify world titles, so we won’t let any of them get held up in traffic and there are a few other seats available at the top table now that Terence Crawford is dining at welterweight.

Another cause of fistic fascination at the 02 comes with the news that Daniel Dubois will be bidding to win a third title – the vacant English heavyweight belt – on the card against Tom Little in just his eighth fight as a pro at the age of only 20.

Little has been vocal in calling Daniel out across social media and now he has got his wish. It should be an explosive encounter and the fans at the 02 are in for a treat.

It is the ideal test for young Daniel at this stage in the game and winning will put him in a strong position to challenge for the British title this year.

We have also set the ball rolling for our big return to Belfast on June 30 and it strikes me that our Irish contingent, likewise, have no issues in signing up for big fights against each other.

It is shaping up to be a fantastic bill at the SSE Arena – topped by the homecoming of the Belfast boy Michael Conlan from his American adventure – and the matches already made have a real 50-50 look to them.

Irish fans have been waiting for the return between Jono Carroll and Declan Gerraghty for some time now, while Tyrone McKenna and Philip Sutcliffe will do business at the second time of asking.

I am delighted to get Gary Corcoran back in the thick of it against Paddy Gallagher and you know there will be no quarter given in that one. Then you have four unbeaten fighters putting it all on the line in Lewis Benson v Johnny Coyle and Joe Ham v Tyrone McCullagh.

It is difficult to pick out one that you can predict to steal the show and I imagine most bets will be hedged on the night.

There is more of the same on the way, so keep a lookout for the next bulletin.

IT WAS PLAIN for all to see that David Haye was there for the taking from when the first bell sounded on Saturday. He couldn’t put any weight on his back foot and couldn’t release any power, hence why he was continually trying to wing in those short hooks. 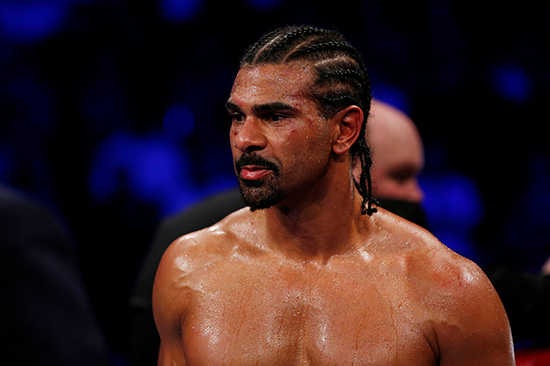 It was obviously a massive handicap and Tony Bellew fought a smart fight and, other than getting clipped once I think, was largely untroubled.

You simply cannot recycle former glories and this must be the end for Haye now.

If Bellew chooses to carry on he will want a big fight and the name of Tyson Fury has been bandied about. There would be no problem making that fight when the time is right, but Bellew insists he would want it before Tyson is back in the swing of things and after just one fight.

Bellew is a smart operator and he knew he was getting a David Haye deep into decline. He is clever enough to know that taking on Tyson flying on all cylinders would be a different proposition at just 28 years of age and no previous injuries.

Don’t forget, Tyson is the one who Haye twice pulled out of fighting against and he would be a whole new ball game.

BOXNATION WILL ONCE again be the channel of choice for boxing fans this weekend when one of the biggest fights of the year takes place at Madison Square Garden between Vasyl Lomachenko and Jorge Linares. 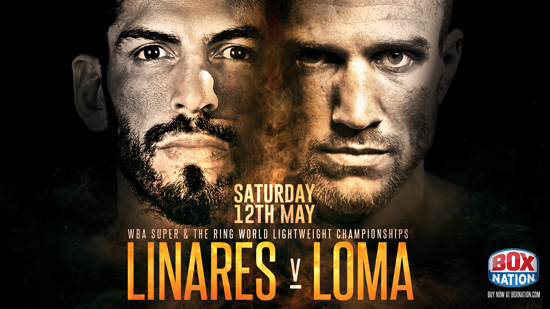 As always, I fancy Lomachenko to win in a big way. Linares is known as the Brit-basher but, in my opinion, Lomachenko is levels above the rest and will show why he is considered the No.1.

Don’t get me wrong, Linares is a class act, but I just don’t fancy anybody up against the brilliant Ukrainian at the moment.

Coverage of Lomachenko-Linares from New York begins at midnight on Saturday, live and exclusive on BoxNation