Dulwich’s dancing master has Smith in his sights

Next on the super-welterweight – light-middleweight in old money – conveyor belt seeking to propel himself into the international title mix is an unbeaten and charismatic talent from Dulwich who was almost lost to the sport. 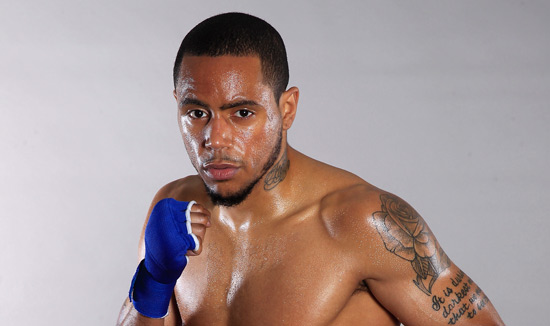 Ahmet Patterson will go glove to glove with Ryan Aston at the York Hall on Friday January 22 with the vacant IBF Inter-Continental title on the line, a belt that does not represent full world honours, but to the winner a valuable ranking providing eligibility for a shot at the top.

Now 28, Patterson’s road to the fringe of the elite has not always been the smoothest of journeys. After winning an impressive 60 out of 67 amateur contests, he turned professional under the Frank Warren promotional banner in October 2010 and got off the mark with two wins before a falling out and split with his trainer resulted in his boxing career going on the back burner and very nearly fizzling out.

A long while out of the gym and over a year out of the ring followed before Patterson picked up the pieces with trainer-manager Martin Bowers, who steered the career of the then welterweight back on course.

But it is not only Bowers Patterson credits for getting him in there punching again. It was Surrey lightweight Danny Connor who strongly believed it was time the rookie pro came off the missing list. Connor made contact and convinced a disillusioned Patterson – who friends believed had retired – that his talent should not be consigned to memory and return to the gym.

Come out fighting he did, but now he would have to do it the hard way, the small hall route with the associated angst of paying your way through ticket sales.

Patterson now describes the experience as ‘the ugly side’ of the sport, but he duly clocked up the wins, claimed an English title on the way, before once again earning his Queensberry stripes and strutting his stuff on the capital’s big stages.

“We had a fall out and I basically had nowhere to go at the time,” recalled the now 16-0 man who now practices his art at the famous Peacock Gym in Canning Town. “I wasn’t in the game and wasn’t even thinking about boxing. Then my old mate Danny Connor called me up and told me I can’t waste my talent and that British boxing needs me and all that. It kind of got me back in the gym.

“I went to the TKO but didn’t really feel comfortable down there and was then invited to come down to the Peacock to have a chat with Martin. We had a chat, started training together and kind of gelled.

“I wish I had been with Martin from day one really as we connected straight away,” added Patterson, whose most recent performances have come at Docklands’ ExCel Arena and twice at Wembley.

Performing and public displays of showmanship are not exactly unfamiliar territory for the quietly flamboyant Patterson. Around the time the dance troupe Diversity dreamed their own dream and showed nimble footwork to outflank Susan Boyle to win Britain’s got Talent in 2009, Patterson himself was very much part of the street dancing scene around London.

The Dulwich mover and shaker found the adulation of audiences addictive as he strutted his stuff on stage with his band of brothers.

“I started dancing when I was about 15, around the same time that I started boxing. I was in a troupe doing loads of competitions, being on stage in front of hundreds of people, performing and making people scream! It was a good feeling, that is why I did it, not for anything else – and the brotherly love!

“I had seen Diversity around a few times, but I don’t think they were called that back then.”

Although he claims not to realise it himself, trainer Bowers certainly recognises the benefits of Patterson’s quick-stepping ability in the ring. Perhaps the ‘Ahmet Shuffle’ could well be a signature move coming to a ring near you soon.

There are a good few potential dance partners for Patterson in the super-welterweight division in the UK at the moment with the likes of Liam Williams, Gary Corcoran, Joe Selkirk and Jimmy Kelly jostling for position behind current WBO king Liam Smith.

Kelly has already had a crack at the champ, while Selkirk and Corcoran are set to get it on in Dublin next month, with Williams to defend his recently acquired British title, along with his Commonwealth crown against Navid Mansouri in Liverpool on February 13.

It is a Brit-mix that holds no fears for Patterson, who is clear in his ambition to become a world champion and would not be fazed were the challenge of overcoming Smith presented to him.

“I think it is buzzing in Britain,” he reasoned before offering his take on Liverpool’s man of the moment. “Of course I want to be a world champion.

“How much do I rate him? He is definitely a good fighter as he is a world champion right now, but I can’t really rate him because I think I can beat him. I really do.

But first there is the obstacle of Ryan Aston at the York Hall, an examination Patterson has not personally done too much homework to prepare for, preferring to leave the finer details to trainer Bowers while he concentrates on what he can control – his own form and condition.

“I don’t know what to expect really except he is a southpaw and has got two legs and two arms,” he joked on his pre-fight study.

“Of course it is an opportunity for me. Every fight affects your pay cheque, that’s how I see it, so you have to go in there and put it all in to get to the next level.”

The BoxNation cameras were not the first to capture the fortunes of Patterson as he had already – reluctantly – hit the small screen. With his wedding looming in 2013, little did he know that his bride-to-be Daina had applied to have their nuptials broadcast by the BBC3 series ‘Don’t Tell The Bride’.

For two weeks before the big day, the happy couple had their every move tracked by a BBC crew, before the wedding day was played out before millions of armchair viewers. Reality TV had bitten, but Patterson had the consolation of a happy missus and a £20,000 cheque to soften the blow.

“We were engaged for a year and my now wife said she wanted to go on Don’t Tell The Bride,” said the groom, taking up the tale. “I said ‘go on then’ thinking she was actually joking but she went on did it. A week later they got in touch with us and it went from there really.

I hated it, it was horrible, but my wife was happy with it!

A former electrician by trade for EDF, Patterson’s line of work nowadays sees him lead a nocturnal existence for much of the week as he provides front-of-house security and concierge services. The 12-hour shifts allow for much contemplation and thinking time before his morning run followed by training at the Peacock.

For Patterson, however, tiredness is apparently not an issue.

“No, I’m in my zone now. I do patrolling and all that, a bit of a walk, but there is a lot of thinking time – a lot. Time that I put to good use, I don’t think so much about my fights, more about the future and where I want to be and stuff.”

You suspect arms aloft in the ring with a world title belt wrapped around his waist figures strongly in his thoughts.