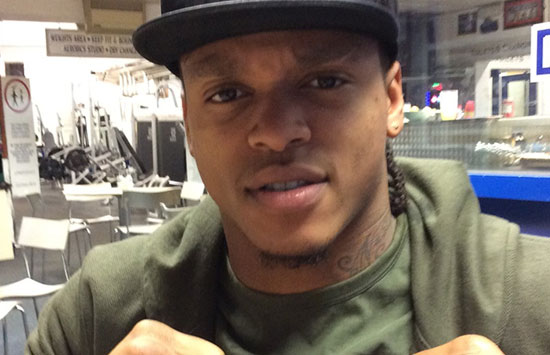 With engaging charm oozing out of every pore and a face that wouldn’t look out of place on a designer fashion shoot, not to mention being a brutal knockout artist, you would imagine the odds are steadily narrowing on Mr Anthony Yarde becoming the face of BT Sport boxing in 2017 and beyond.

Blazing a trail for the forthcoming BT Sport-BoxNation axis is surely in the pipeline for the light heavyweight poster boy when the first bell rings on a captivating new era early next year and the 25-year-old is already more than putting his marker down.

Nine straight wins in the professional game since turning over with just 12 vested adventures previously to his name, Yarde has recorded eight KOs, with five of them coming in round one and the others in the second.

He has burst onto the scene with a bang, literally, but is also fully aware that the calibre of opposition put in front of him have been subject to critical scrutiny.

Patience and caution have been the watchwords for his trainer-manager Tunde Ajayi and promoter Frank Warren and, for now at least, Yarde is content to comply, accepting that he is being put through fight school with his insatiable yearning for learning.

Most of those he has shared canvas with have barely laid leather on him, which he admits brings a combination of frustration and enjoyment, but he knows it is worth biding his time before playing the pain game for real.

“It is a mixture really,” considered the Ilford-based banger. “Boxing is a sport where you don’t just turn the stone and expect to find gold, you have to work for everything and do it in moderation.

“I have to keep remembering that I only had 12 amateur fights and nine professional now, so it is not a lot of experience. Even in the amateurs I had 11 knockouts out of 12, so even those three-round fights weren’t going the distance.

“So in terms of how much time I have spent in the ring, it isn’t much. I think the durability in my opponents will come at the right time. Everything is about timing and Tunde says, at the right time, I will get the opponents who will take me the distance.”

His promoter last week described matching him as a ‘delicate balancing act’, while also revealing that some potentially more stubborn British light heavies want to play no part in his learning curve.

“From listening to such people, I know the worst thing to do is to rush things.

“It was much the same for me in the amateurs when, in my 8th fight, I fought a guy from open class. It was a tough fight for me, but I stopped him in the last round and after that nobody wanted to fight me. He was supposed to be a league above and it was good to win, but it also created a problem.”

Despite clocking up only 15 rounds – with many of them not completed – Yarde contends he is still being educated and absorbing knowledge from each encounter.

“Yes, every fight I am learning from because there are different crowds, a different atmosphere and from just stepping into the ring I feel you learn something and deal with pressure a little bit better. You get a different opponent in front of you and, while they might be similar in style, no two boxers are the same.

“My learning predominantly is done in the gym and that is why I practically live there,” he added, before admitting that his missions so far have not been coupled with any fear of losing.

“It is all about schooling. Right now I am at the stage where if I can’t beat the opponents put in front of me, with my aspirations and ability, then I shouldn’t be boxing. I do my homework, train hard and reap my rewards.

“A lot of people have a lot to say about the opponents I am fighting and call them journeymen, but my last one had 22 wins, ten losses and had knocked out 10. So sometimes it is who you are in the ring with, he might not have fought anyone like me or got hit with that type of shot before.

“There are other prospects out there who are not stopping these same guys and not doing the job I am.”

So if Yarde is being taken to school, when is the end of term or final exams?

“I believe school is out when you finish your career. It is a sport where you never stop learning and that is why I love boxing.

“When are the exams? I would say from my pro debut it has been exams but exams do get harder. When you are in the gym that is you doing your studying, when you are in the ring that is your exam and there are different levels of that – your SATs, your GCSEs, Masters, A-levels – and you don’t just jump to A-levels.

“Yeah I am doing the 11-plus at the moment, or maybe 9-plus after that many fights! I am taking the sport seriously and, at the right time, you will see the big fights and performances.”

Yarde will be punching in front of a bigger audience next year when BT will become the most potent ingredient in boxing’s broadcast cocktail and he is more than up for being a major player in what will be a whole new brawl game.

“Yeah hopefully that can happen – that would be another blessing to come my way! I believe you reap the benefits of your hard work and I would see it like that. I have to keep that in my mind because I think hard work is the key to success.

“I don’t think you see any majorly successful people who don’t work hard or lose sleep.

“It is a massive deal and it is going to reach millions of viewers. The blessings keep coming my way and will keep coming because you have got to keep positive.

“It could be life-changing and people call them dreams, but I keep thinking about it and want it so badly. Sometimes it doesn’t happen for you, but I don’t look on the negative side of things and keep positive. Good things are happening and I have got to be thankful.”

A modern form of endorsement and gratitude is awaiting promoter Warren, the architect of British boxing’s biggest television package.

“Yeah man, he done his thing and I’ll have to give him a little fist pump for that! It is a massive deal that is good for all his fighters and good for British boxing as well.

“I can see this becoming something really special and I can’t wait for it.”

Yarde would now like to go on the road, although not in the sense of traditional boxing-speak. He has no intention of occupying the red corner, but does quite fancy the prospect of showcasing himself on shows across the whole country as a number of the sport’s biggest entertainers have done in the past.

Word is getting out about the new big thing in the light heavy mob and there was an audible crackle in the crowd at the Brentwood Centre last week moments before he confidently embarked on his ring entrance.

It is a buzz he would happily export to arenas around the home nations, having already been afforded a taste of the high life on one of the biggest stages of all.

“One hundred per cent! You look at the greats like Naseem Hamed and it is about blueprints. I don’t think it was just the fighters as it wasn’t them putting on the shows, it is about legendary promoters.

“Frank Warren has accomplished so much in the sport of boxing and had so many world champions – many that he has had from the start and made them world champions. You have to trust such knowledge and experience and Frank is a Hall of Famer in the sport.

“With regard to going around the country, when Frank directs me to do something I am not going to argue with him or question him. If I have got a question to ask, me and Frank talk and he explains things to me. He also asks me questions and it is good to have such a relationship.

“Even from early in my career I have done different places in London as well as Manchester on the Billy Joe v Andy Lee card, which was a great experience. It would be good to keep branching out and Dallas was a life experience you couldn’t buy in terms of everything.”

Indeed, Yarde did Dallas back in September when he was granted a slot on the undercard of Liam Smith’s ultimately unsuccessful defence of his WBO world title against Saul Alvarez at the towering AT&T Stadium.

His quota of first round stoppages was duly topped up, but he placed a greater value on observing the etiquette of those who dine out at the top table.

“Frank co-promoting with Golden Boy, being involved in that whole set-up was amazing.

“I now understand the term ‘you can’t buy experience’ because I have now seen it for myself. Before I turned professional, Tunde took me to Floyd Mayweather’s gym and I met Floyd. Going there was motivation, I met 50 Cent and spoke to him about business and stuff and it was fascinating to pick the mindsets of these people, who are winners.

“Being on a bill in America and seeing all the press and the number of interviews that have to be done. You have to do it and another thing I noticed was that Liam Smith wasn’t as used to it as Canelo was. It was nothing to him, even though he was making weight, he did his little smile and bigged up the Mexicans.

“Liam was the outsider coming into America and he handled himself well, but just wasn’t as used to it as Canelo.”

It is the sort of stage a few people in the know fully expect Yarde to be punching his weight on in the future but, for now, he knows he’s got to plant his feet, keep his guard up and carry on learning the ropes until the leash is eventually loosened on the Beast.

“It is going to get bigger and that is why I’ve got to keep my feet on the ground and don’t let it get to me. I’m nowhere near, literally nowhere near, where I want to get to, but as long as I stay on the right path and there is no traffic in front of me, I’ll be good and I’m looking forward to it.”

Tomorrow – Alan Hubbard’s Punchlines asks: Why are the Beeb so biased against boxing?