Erasing the ‘0’ from the records of his opponents in five out of his last seven title contests was just for starters as far as Billy Joe Saunders is concerned. 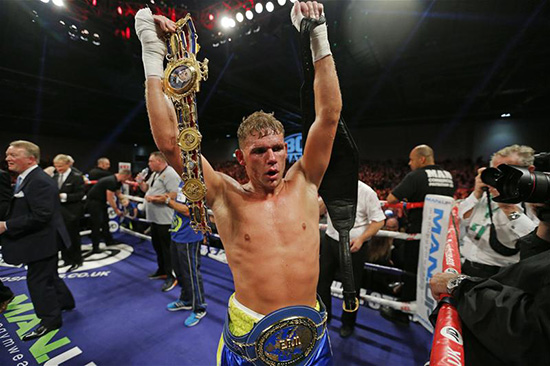 The belt-collecting sequence saw him retain his Commonwealth title, as well as win the British, WBO International and EBU middleweight straps – against adversaries jealously protecting unbeaten ledgers of their own.

The likes of Jarrod Fletcher, John Ryder and Emanuele Blandamura have been vanquished, as well as Gary ‘Spike’ O’Sullivan and Chris Eubank Jnr, who now meet next month in a coming together labelled by Andy Lee as ‘Starbucks boxing’ – essentially a fight fuelled purely by hype.

Saunders still reasons that his career requires a ‘breakout performance’ and, if this is so, the stage is set on December 19 when the Hatfield man and Limerick’s Lee will pull the Xmas Cracker at the Manchester Arena.

“Against (John) Jackson he was getting badly beat up, catches him and knocks him out. With Peter Quillin they were happy with the draw – I wouldn’t be happy with a draw against Peter Quillin! Definitely not. You can see what he’s going to throw and literally count to five before he throws it.

“Andy Lee has been in the ring with bigger punchers than me, but not smarter, clever ones. None of them. Korobov, good fighter, but very stiff and looked very big at the weight and bulky. No good, you’ve got to be slick to beat Andy Lee and clever, to out-think him.

“I need that big breakout performance and I know the best time to show it is now.”

The pros and pundits, while not confidently predicting the winner, are pretty much unanimous in calling either a points win for Saunders or a knockout triumph for the champion. Saunders suspects that culture could well come into play on the night and best laid plans abandoned at any moment.

“One of the things on the night is that me and Andy are both from a Traveller background. So I’m sure that if my game-plan doesn’t come off how I want it to from the start, or his doesn’t, we’re both gonna have to take a chance.

“Whoever is down, if I find myself four or five rounds down by doing what I’m doing then I’m going to make it as much as a slugfest as needed to get the win,” added the 26-year-old, who does not completely rule out attempting to confound the pundits and look for an early night.

The 26-year-old, who pointed out the rather telling stat of having not being defeated on English soil since the age of 12, could not be accused of taking any shortcuts to dining at the top table, having taken on every challenge on the domestic front, even delaying his shot at a world title to put it all on the line against Eubank jnr.

Lee himself recently expressed some regret over not mixing it with those of a similar age-group from these islands, natural rivals such as Darren Barker, Martin Murray and Matthew Macklin.

“People say to me, ‘do you regret stepping aside and letting Andy fight for the world title?’ No, because for one I would’ve had to go to America to fight. While I don’t mind and would go to Japan, when you are a home favourite, if it’s close, you are getting it. Andy went there and, thank God he won it and bought it back, and I had one more issue to clear up and that was Eubank.

“I wanted to clear up every domestic challenger so when I did go up to that level it was done. Darren Barker when he won, he wasn’t the best in Britain because he hadn’t boxed Martin Murray and hadn’t boxed Matthew Macklin – I didn’t want that.

“I remember I used to be a critic of it, not so much Darren, but the others, thinking why aren’t they fighting each other. Any of them could have made the fights if they really wanted it, they could have pushed for it, but I think at the time they were all looking for that breakthrough world title fight and they were getting used as opponents.

“They weren’t fighting it out and seeing who the best was. Before you fight for a world title you should see who the best in the country is and I know I’m the best middleweight in this country.”

The Xmas Cracker will determine who is the best middleweight from the Travelling community, a title that will live long in the memories of those from such a background. History will be made on the night with two Travellers competing for a world title for the first time and Saunders confirms the buzz is building. 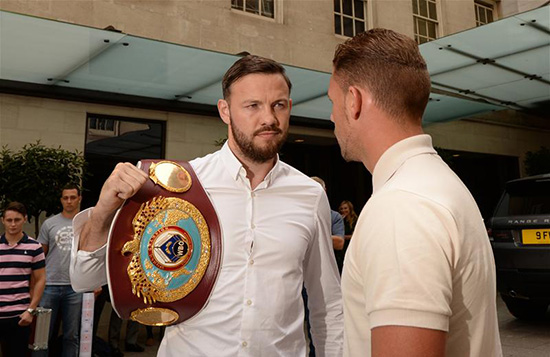 “It is harsh, but that’s what it will be.

“It is the nature of it, that is how it is, you’ll be known as having got beat, ‘you’re no good, you got beat’. It is the element of what we’re fighting for, he’s the Irish Traveller, I’m the English Traveller, we clash and it’s going to be a big, big, big buy-in.

“They’ll be coming from all over, absolutely. From Ireland, Scotland, Wales, England – they are going to be everywhere, I know. This fight will sell more in the last couple of weeks. It is just before Christmas and, for a lot of people, it is finishing up time, they might be getting a few presents, but will be having time off and will the there.”

For after the pre-Christmas exchange of punches in Manchester, the name of Gennady Golovkin has been mentioned in Lee’s circles, something Saunders feels is less an ambition and more a final pay day for the seasoned Irishman.

“He’s knows it himself,” he stated. “I know a lot of people who know Andy and he’s nearly given up boxing a number of times. He is 31 now and has had a hard career, he is with Adam Booth and is easing it out a little bit now.

“The most experienced fighter Andy has boxed is Quillin and he got a draw.

“He knows his boxing, he’s a good fighter but, you look at the Andy Lee of five years ago and he was double the fighter he is now, I think. That is because he was fresher and now I’m the fresher man.

“Nobody knows for sure what will happen, but I know one thing, I’ve got the heart of a lion. Nobody knows what I can bring out, I don’t know myself, I seriously honestly don’t know what I’m going to bring out on the night.

“I’ve heard people say I don’t know what it’s like to be put under pressure, but I know I will always find a way to win and my heart is bigger than my body.”