The cheerful charmer who punches under the stage name of Boy Jones Jnr has now reached double figures. Since turning professional in February 2015, the 6ft super featherweight has now put a few miles on the clock and possesses a record of 9-0-1, with 31 rounds under his belt. 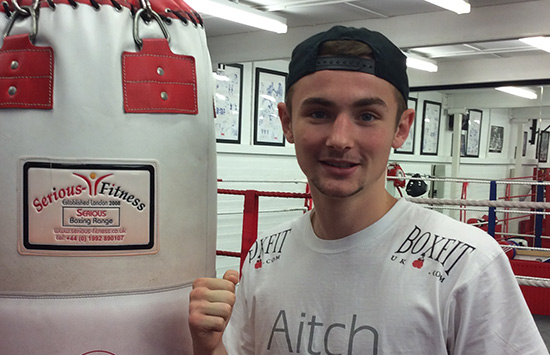 But it is no coming of age tale just yet for the Boy, also known as Ben, as in this story the bookmark is planted in the opening pages and, like the 19-year-old, is still in its adolescence.

There is a strong yearning among the boxing Twitterati for young punchers to push on when their record hits double digits. No more carefully selected fodder or ‘learning fights’ – let’s see if he can take one on the chops eh.

Unlike the majority of prospects on the circuit who mastered the basics in the amateur ranks, this boy is still doing his schooling, learning on the job in the full glare of the boxing public. He just needs a little patience.

There is a plan in place and it is a long-term one but, for now, Jones is just happy to be 10 not out.

“I feel like a veteran!” he joked when reminded of hitting his first milestone.” It’s gone, not quick, but it feels like it was just the other day I was doing my first fight. It’s good that I’ve stayed busy and got in so many fights because all I’ve been doing is learning, learning, learning. In every performance everyone has been saying I’ve gone up and up, so hopefully I can carry that on.

“It’s been fun too. We’ve had lots of different opponents with loads of different styles as well, so in every fight I’ve been learning.”

Jones believes he is now made of sterner stuff than the innocent looking puppy-like figure that bounced onto the 02 Arena stage early last year and outpointed Joe Beedon on the undercard of Tyson Fury’s destruction of Christian Hammer.

He puts it down in part to a training regime that now sees himself and his stable decamp to Murcia in Spain for preparations with trainers Dominic Negus and Lenny Butcher.

“I dunno, you would have to ask everyone else, but I feel I’ve got more of a boxing brain now,” he reasoned. “At the 02 there was loads of people doubting me, saying ‘why’s he turning pro cos he’s had no fights’ and that sort of thing, so I showed everyone that I can box and I am a prospect.

“Over in Spain we are doing three times a day, six days a week, whereas for my first fight we didn’t train like we do now. It’s just mad and no-one trains like us.”

He wasn’t actually a complete novice when he stepped between the ropes in Greenwich, having dipped his toe in the unlicensed or white collar waters but, as rookies go, he was undercooked verging on raw given his lack of amateur education.

What he did have in his corner were people who identified and were prepared to invest time in his potential.

“Yes, at the start me, Dom and Andy Ayling (Queensberry Promotions) sat down and said the first three years were going to be my apprenticeship and we would take it slowly, slowly. It is not about picking my opponents because not all the fights I’ve had have been walkovers, have they?

“It is about learning now and looking at the bigger picture – four or five years on.

“I said to my sponsors that I’m not going to be in any mega fights now and it is not all going to be massive. The fights I had at the Prince Regent Hotel did me the world of good.”

Jones’ first five fights were spread across the 02, Wembley Arena and York Hall and his profile increased rapidly as boxing channels took a liking to his cheeky chappy persona. Trainer Negus harboured reservations over his punching pupil embracing media duties with such obvious relish, but accepted it goes with the territory.

Negus did, however, have no qualms about removing him from the front line and getting him to serve a bit of time on the ‘small hall’ platform in the aforementioned local hotel, giving him the opportunity to shine away from the spotlight.

“I was like a little kid going on TV and that is everybody’s dream! But it carried on a bit,” he admitted before acknowledging that putting in a couple of shifts at the hotel served him well.

“Yes definitely, when you are fighting on the big shows it feels like there is a load of pressure on you with all the people. A couple of my unlicensed fights were at the Regent so I was used to it and it felt like it was all in a day’s work for me. 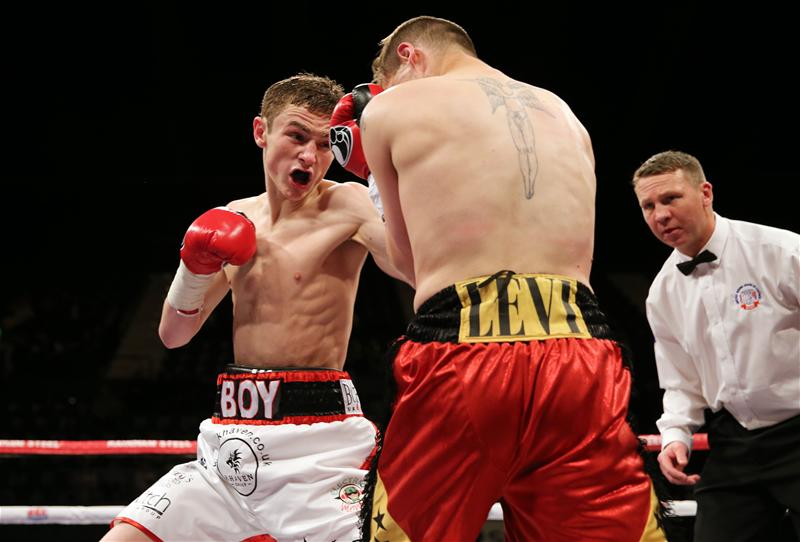 “It was different, all the pressure wasn’t on me and it helped a bit. I’m used to that little atmosphere there. It brings you back to earth a bit, although I am not a superstar, far from it.”

The Prince Regent is situated in Chigwell, a town Jones called home when life changed for himself and his family of mum and five brothers. It was a time the idea of putting on the gloves was first mooted but, at first, quickly rejected.

“My mum and dad weren’t always happy with each other and he went,” recalled Jones. “We don’t get on and stuff happened so we ended up in a two-bedroom flat. There were seven of us and we had the time of our lives.

“At Christmas we got a football and had pie and mash for dinner, it was unbelievable, sitting there having a laugh. We lived in Chigwell and there was a gym just around the corner. My mum and brother wanted me to box because I used to mess about a lot, so I went to the gym but didn’t like it and thought ‘I’m not doing this’.

“We then got a house in Chingford and I was getting a haircut one day when my brother Joe asked the barber about a gym for boxing. I thought ‘here we go…’ and the barber said about his mate down the road, Dominic Negus.

“I popped my head in when my brother was at work and he shouted ‘come in, don’t be shy’. I walked in and from there it started for me.”

Jones still wasn’t particularly fascinated by the prospect of trading leather. He was drawn in by the family-like environment of his new surroundings and secured himself a placement, working towards a diploma in sports and fitness.

It was only after putting in some early morning hours with his new mentor that he was tempted to try his hand in ring and subsequently emerged the winner in five unlicensed contests.

“I went to his gym and started bunking off school to go – I’ve got no GCSEs though! With all the faces telling all the stories I quickly got to like the place.

“To be honest, when I was working there I didn’t think I was going to be a boxer, it was a job when I left school. Dom then starting training me in the mornings at 6am and then I would go home for a sleep and come back and work from 1pm until 9.

“I got into the rhythm of it and Dom asked if I would fancy a fight. My learning wasn’t in the unlicensed though, mine was sparring with the pros like Kevin Greenwood and Lee Markham, the fights I had were just like a little bonus.”

The level of sparring partners has gone up a notch or two since the early days, with former world champion Kiko Martinez now his regular mover and shaker on training trips to Spain. If he did suffer from any stage fright with being in with a veteran of 43 fights, he quickly got over it.

“For my last fight I had a lot of sparring with him and you think ‘that is a former world champion in there’. It makes you realise that everyone is human. So I was sparring with Kiko, going toe-to-toe and afterwards Dom asked me what the difference was. Nothing. We’re both human, with him just having had more fights than me,” he added, revealing that Martinez did offer some feedback that he unfortunately struggled to decipher. 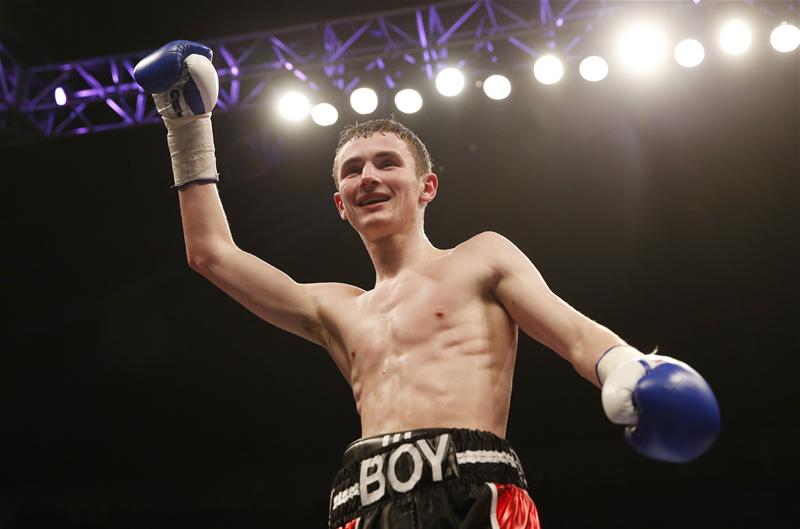 “It was in Spanish so I couldn’t understand it, but he said to Sanj (Spanish speaking stablemate Sanjeev Sahota) that I was a good boy.”

It won’t be too long now before Jones is driving his trainers up the wall with his wish for a title shot while he is still in his teens but, for now, it is the pedestrians of Chingford that need to be on high alert.

Manager Ayling is attempting to get him mobile by funding driving lessons, although what turns out to be the longer-term project out of his title aspirations or driving licence is open to debate.

“It’s Andy’s fault if I cause a major accident on the road! The lessons are going alright and I can reverse – I just struggle with going forward! It is actually quite fun, I am far from booking my test, but I will be driving by the end of the year – I’m just not sure which one.

“I feel like I’m nearly ready for a title fight. I know I’m young and Dom and Lenny see the bigger picture so I’ve got to listen to them. I’d like to have a little title soon because I think it will build everything back up as people are always asking what I’m fighting for. People not into boxing don’t really understand.

“I feel like I’m there, not for big titles, but something like an Area belt. Something to, not so much get me going, but everyone else. I would love to win at a title at 19, but that is me and Andy and Dom say I am not ready yet.

“I’ve only had a handful of fights, 15 in total, so that is not many and I can only see what is right in front of me, while they can see further on. I don’t want to sprint before I can walk.”