When young fighters are ready to take the plunge in the paid ranks, a summons is dispatched from the Board of Control calling them to a meeting to assess credentials ahead of licensing. 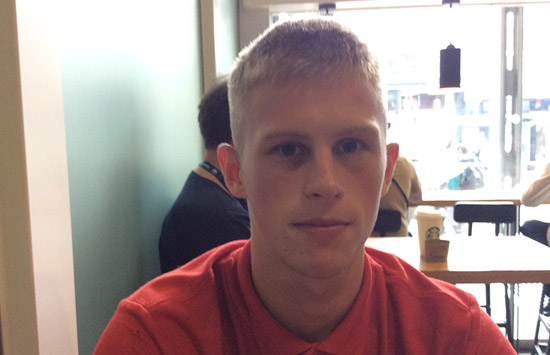 It is a gathering where wise old heads pass on pearls of wisdom to the young hopefuls, along with stern warnings over the perils of not making weight in a sensible fashion.

A final message is conveyed with conviction along the lines of ‘and don’t give up the day job’, reminding the future prospects that fortunes are few and far between in the fight game.

For young super lightweight Charlie Driscoll there is not much chance of giving short shrift to his morning shift because his trainer also happens to be his boss.

The Driscoll daily routine involves the shrill of a 5am alarm, a congested commute from South Ockendon across to Waterloo, before clocking on for a 6.30am start at Pimlico Plumbers merchants. At 2pm he will clock himself out and remain under the watchful eye of boss/trainer Sam Mullins while working up a sweat in the gym, then return to work for a couple of hours before embarking on the journey home ahead of his evening run.

It is a far cry from the favoured line of employment of many a modern day fighter, which involves getting paid to watch other people sweat under the occupation title of ‘personal trainer’, but the 22-year-old takes the positives and reckons he has got a bit of a result in not having to endure a lengthy slog to the gym.

“I don’t have to travel to the gym, which is good, the only time I do is when I go sparring, when I would work until about four, clock out, then go to wherever we are sparring,” reported the 1-0 rookie who made his eye-catching debut at York Hall in June. “It is a touch training over the road, to be honest.”

While his routine may appear a little daunting, Driscoll maintains a cheery disposition because he is leading a life that enables him to pay the bills while following his dream at the same time.

He is also following in family footsteps, with his father Mick an ex-pro and current head coach to the England Schoolboys squad, while his two younger brothers are hoping to follow suit. It is a family affair, Driscoll insists, with his mum the strict head of catering and girlfriend Laura clearly the understanding type. 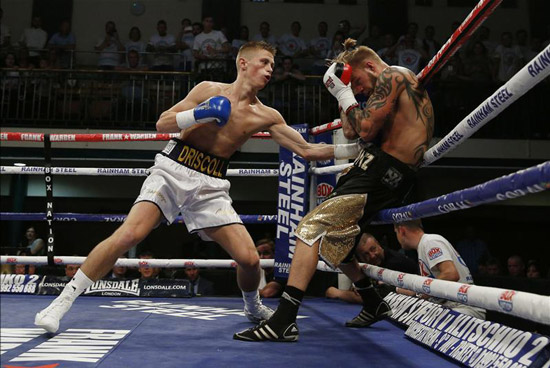 “You’ve got to balance it off, but she knows the gym comes first,” he reasoned with a knowing smile. “It was my little brother’s 18th birthday a couple weeks ago and I couldn’t go out for it. The only time I will let myself go is for a couple of night’s after a fight to celebrate, then that’s it.

“I get up, I go to work, I train, see my family and then go to bed. It is my routine and I have done that during my time as an amateur with West Ham. I have always lived it, with having boxing in my family with my dad and my mum knows what’s what and will say ‘Charlie you ain’t eating that shit, I’ve cooked you something here properly’. We’re such team, it is drilled into me and I live the life. Not just me, my whole family does.

“If my mum saw me eating a Twix she’d give me a clip around the ear!

“In our first two months together I saw Laura three times, she’s been blinding and knows the crack,” added the former amateur starlet with 65 fights on the clock who is well aware he is onto a good thing on the domestic front.

“That’s it! She’s part of the team forever.”

Driscoll’s lifestyle discipline paid dividends when he got to open the first chapter of his professional story against the tough, grizzled road warrior Fonz Alexander at the fabled home of London boxing.

Despite having a vested pedigree that includes the winning of six national titles and England recognition, stepping out bare chested was the stuff of dreams and that first vital step has now been successfully negotiated.

“I’ve always dreamed of it as a kid, you put that music on and walk out to the ring without a top on. You always think about it, as an amateur you do the ring walk, but it is something different, the feeling is different.

“I’ve been in finals and taken 20-30 people to come and watch, but when you’ve you’ve got 170 people there singing your name… That was on a Thursday night as well, on a Saturday it will be double.

“I was overthinking it in the days before, thinking I was going to be shitting myself walking out in front of everyone. I can’t tell you what it was like, maybe because I was so in awe of it, it took the nerves away from me. I just thought to myself ‘enjoy it’ and that is what everyone told me to do.

“Every one of the people there for me were my family and friends and I just soaked it up and enjoyed it. I never felt I couldn’t lose because you can always do something wrong, but I just thought relax, keep it simple, do the basics and I know I’m a different class to the fighters at that level.”

Alexander, of course, is an old hand at being a dance partner for debut boys and has absorbed the threat from numerous elite prospects in his time, being stopped only three times in 40 outings.

What was clear from his reaction to Driscoll in defeat – having hit the canvas in round two – was that the novice pro had earned his respect. He rated him.

“He is a really nice guy, he came over and said I’ve got a big, big future. He was respectful and applauded me after. He said he’s been in with a lot of top young prospects and that I was right up there.

“He’s fought red-hot prospects all around the country and it was nice of him to say I was something special. It was lovely of him to say it.”

Driscoll has a previously wayward cousin to thank for pointing him the direction of boxing, rather than a father who is in the business. Football was his thing and, at the age of ten, it was the right wing as opposed to the ring where he excelled at one of Tottenham Hotspur’s development centres.

“No, definitely not, my dad never took me near and gym and didn’t want me to do it,” he recalled. “He didn’t say no when I wanted to do it, but he didn’t encourage it either.

“I’d never boxed, was really shy and hated fighting. My dad never mentioned boxing and I never even hit a bag, but my cousin was a right little shit and needed sorting out. My dad said to my uncle that nothing is better than boxing, where he would learn some respect and a bit of discipline.

“I asked if I could go too and the first time I walked into West Ham I loved it. My cousin gave up after a couple of weeks and I asked my dad if I could carry on. He said it is not like football, where if you’ve got a bad leg you’ve got ten other players who can play well and you can get away with it. In here, if you’ve got a bad arm or a headache and you want to mince about, you’ll get hurt, proper hurt, so take it seriously.

“At the time my mum went mad because I was playing for Tottenham, playing Tuesdays and Thursdays, and she was driving me all the way to Chelmsford and back an hour each night.

“I was told I had a chance and they weren’t happy when I told them I was leaving because they said I had a future. At the time I was also training with Millwall too at development level, so I was training or playing every day.” 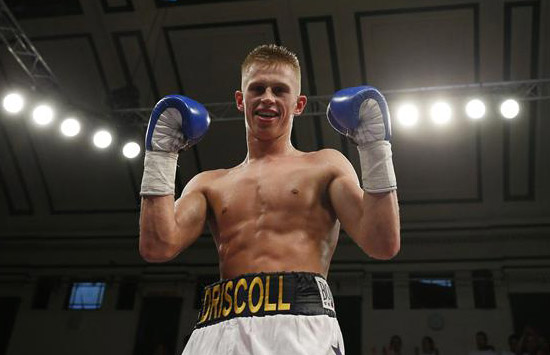 So at the age of 11 he gave football the boot having made quite an impression on the West Ham trainer, the late Mickey May.

“Mickey said to my dad after about five sessions in the beginners that they were going to get me carded and move me up.

“They said I was a natural and that probably came from my dad.”

Like many others before him, Driscoll encountered frustration and ultimately disillusionment as he climbed the amateur ranks but, strangely enough, it was a decision in his favour that convinced him to start the process of shedding the vest.

“I went in the ABAs three times and lost twice in London finals and both times I 100 per cent thought I won really convincingly, especially the first time. I said I would give it one more crack and trained probably three weeks for it – and won it. That year it was probably 50-50 and I thought the amateur thing is not for me.

“It wasn’t something I wanted to get up and go running for, I wanted a new ladder to climb,” he explained, but before he waved the three-round game goodbye, there was an England call-up that delayed proceedings, although not for too long as matches didn’t materialise and he didn’t fancy playing second fiddle in Sheffield.

“I wanted to fight, same as with football training, you want to get on the pitch and play the game, you want to be in the starting line-up and get the kit on, not just think ‘I like the training’.

“I don’t want to be on the bench, I want to get on the pitch. They said to hang on for another one, but I said ‘that’s it’, I wanted to go pro and I did.”

He duly jumped aboard the BoxNation boat after signing up with Frank Warren, a platform he believes is like no other for promising pros.

“It is really good being with BoxNation and it is an amazing opportunity for young fighters. They put kids out and trust in them by putting them on TV, which is brilliant and you don’t get that anywhere else.

“They take a good chance on people and believe in them, young kids like myself are given the exposure from day one. Fighters are looked after all round.”

Driscoll, who is next on the BoxNation beat on October 8 with the durable Dan Carr in the offing as a potential opponent, likes to think he is kicking his amateur habits and maturing into a versatile operator.

He knows he’s got to serve his time and learn the trade, but admits he would not be adverse to taking a few risks as he builds his boxing CV.
“As a kid, all I ever done was walk forward throwing hundreds of punches walking people down West Ham style – bop, bop, bop. As I got older I learned to box a lot more and now I personally think I am good at both.

“I like boxing on the back foot but, if I have to, I will 100 per cent stand there and ‘ave it. Every fighter loves doing that, but you’ve got to be sensible enough not to get involved, but that is the hard bit.

“I had 65 amateur fights with national finals, so I not saying ‘throw me in there, I’m ready’ but I am prepared to take a risk, otherwise what’s the point in being there?”

So it is next stop Harrow but, in the meantime, it is back to the day job.