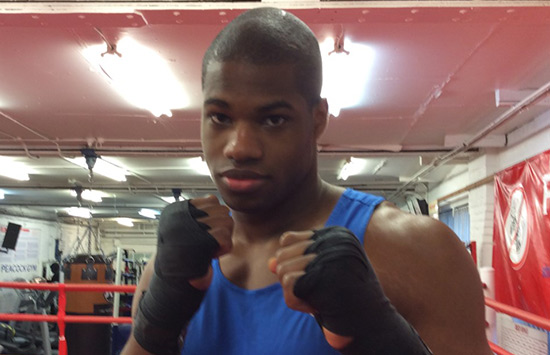 If you take the young man himself at his word, the likes of Deontay Wilder, Anthony Joshua and co are simply keeping the world heavyweight title belts warm for a few years until the time is right for him to start his own collection.

Yes, Daniel Dubois is adamant it is only a matter of time before his name is etched on at least one of the coveted straps.

He is not alone in his train of thought and there was certainly no shortage of potential suitors when word got out that the Team GB starlet was ready for an early baptism on the professional stage.

An element of the 19-year-old’s unshakeable belief in his future prospects comes from having mixed it in a big way with the aforementioned IBF champion in sparring, as well as the other GB big men, Joe Joyce and Frazer Clarke.

Being a suitably modest character, Dubois, who resides in affluent Chelsea, chooses not to give the game away as to exactly how well he used to equip himself in the Sheffield sparring sessions. Not publicly at least.

Suffice to say, the Kings Road kid can bang, which is probably why his emergence has caused such ripples in the fight fraternity. That and the host of amateur gongs he collected while in his teenage years after winning his first schoolboy title at the age of 13.

His vested success captured the attention of the Team GB recruiters two years ago and he ultimately became a full-time member of the much vaunted Podium Squad.

The super heavyweight was earmarked as an Olympian in waiting and the GB coaches were convinced he had all the tools to head up the heavy mob at the Tokyo Games in 2020.

“After I won my first junior ABAs they started calling me up more and getting me to training camps where I started training with the heavyweights up there,” reported the softly spoken big hitter. “I then started giving them all a bit of bother!”

The opportunity to succeed Joshua and Joyce as Olympic medalists has now been duly passed up after a careful weighing up of his options. Ultimately, it is the time involved in participating in an Olympic cycle that Dubois was not prepared to invest.

It is four years he believes he can put to more productive use in the paid code of the sport and he strongly suspects he will be at least ready for a tilt at the top before the Olympic flame is reignited in the Japanese capital.
Seeing those who did serve their time, such as teammate Joyce and others, being on the wrong end of dubious decisions in Rio also reinforced his resolve in discarding the vest.

The interest in showcasing his talent coming from far and wide, he admits, did play a part in his own decision making when it came to crossing the divide, but mostly it was a hunger for self-improvement and to prove he has what it takes in the pro game.

“It was a bit of both really, I wanted to step it up and as an amateur you can only learn so much.

“As a pro I want to learn everything, improve myself as a fighter all round and be more aggressive, to go for the kill. I am still a bit amateurish in my work and it is a case of getting out of old habits now.

“The middle of last year I decided that in 2020 I could be at the next Olympics or I could be a world champion. The latter is what I want to go after and pursue.”

In press cuttings covering his amateur achievements, Dubois had previously touted himself as a likely lad for 2020, but now he admits it was more a case of toeing the party line that was repeatedly drummed into the elite prospects.

“I know, but that was what everyone was telling me at GB so I just went along with it,” he conceded. “You can get brainwashed a bit, every day you hear ‘2020, forget about going pro’.

“Once I’d set my mind on it (turning over) that was it, no turning back. They didn’t really try and talk me out of it because they knew it was on the cards. Most of the coaches knew and thought this kid can go a long way as a pro or an amateur, whichever way he chooses, if he puts his mind to it.

“In that time of four years I could take over the world in pro boxing.

“I watched some of the heavyweights in Rio and watched the final between Joe Joyce and Tony Yoka. There were plenty of bad decisions and that was a part of it for me, definitely.

“That is the worst part, to train so hard for so long and have it taken away.”

The sparring sessions against those with many more miles on the clock told Dubois he could make a good fist of it in the heavyweight arena, where he will be managed and trained by the highly regarded Martin Bowers at Canning Town’s famous Peacock Gym.

He is not expecting to become an overnight success and is prepared to bide his time. The professional exploits of Joshua will be a useful yardstick, with the 2012 gold medalist taking a few years to make a significant impact and being carefully matched, some would say even to this day over four years after his crowning moment.

“It was that (the sparring), I knew that with a bit more training and one-to-one coaching, I would definitely be ready for it.

“I look at him (Joshua) and he has done well, given himself time to adjust to being a proper professional fighter. He has got rid of most of the bad habits or covered them up.”

While Bowers will have his hand firmly on the wheel mapping out the daily direction of his new young charge, it is Frank Warren he has entrusted with plotting his professional course and he reveals the Hall of Famer has insisted his only concern from now on should be boxing. The veteran fight maker will take care of the rest.

Warren’s MO has long been about launching the careers of young fighters and nurturing novices into champions – a fact not lost on the youthful Dubois, who is certain he has selected the perfect satnav for what he is sure will be an eventful journey.

“It was a good offer and he is going to give me a top platform,” he reasoned. “He said all I have to worry about is my fighting and training, that is the main thing, just to stay focused on my boxing and I listened to that.

“I spoke to the Hearns, McGuigans – all of them. Frank takes fighters from day one and builds them up. Because of that he has proven himself to be the best promoter out there, in my eyes.

“He said I would have a minimum of six fights this year and I fully expect to go around the country. As long as there is a ring, I will fight anywhere.

“I’m still young so I can take my time and take it step by step. If they see me improving and think it is right, they will put me in with the top boys.

“With Martin I think his work ethic and training are second to none and he is so committed to his fighters,” he added on his choice of training mentor. “He is so passionate about the sport and trains his boys hard, he works them really hard.

“His fighters are well schooled traditional boxers with hands up and chins down!”

The fact that the hands of Dubois have been clad in leather from an early age is the work of his father David, a passionate fight fan with a genuine love for the sport.

For David, however, it was not about living out any sort of fistic dream via his children – of whom two others also box. More important to this boxing mad father than producing champion offspring was the happy byproducts of growing up in and around the gym. Respect and discipline.

Dubois’ 16-year-old sister Caroline is a 30-0 European champion, while his 12-year-old brother Prince is a 60kg promising heavyweight.

“Being in boxing was on the cards since I was born and it is down to my dad, who is a big fan. He just loves the sport and put me in the game. I was the first and started at about 10 when I was a skinny kid. I was strong, but tall and skinny.

“I took to it straight away and loved it. As soon as I saw them in the ring it was what I wanted to do and be good at it. I picked it up quickly, I had to work on it a lot, but I did pick it up.

“I started training at the Peacock, but my first club was Repton, I stayed there for about two years and had about nine fights before I left and went to Dale View. That is when I started winning national titles.

“My dad just wanted us to be disciplined, that is why he put us in the sport and trained us, making sure we were in the gym doing something. If we weren’t boxing we were swimming or running – all types of sport.

“It was both of our dream really, when I took to it I thought I would be good at it and would be world heavyweight champion.

“Boxing kept me focused as well as disciplined.”

It was perhaps inevitable the Dubois clan would have a penchant for pugilism, given a bit of recent research carried out by his doting dad. Some picking at the family tree unearthed a female ancestor famous for trading without leather.

“What I’ve read about Sylvia Dubois is that in the 18th century she was a pugilist, a bare-knuckle fighter. My dad found it for me and showed me, I didn’t know anything about it until a month or two ago.

“I know it is weird, from what I read she was a hard working, very ambitious person who just wanted to do everything. I would’ve liked to see how she fought. I’ve seen a picture of her as an old lady.”

So perhaps the family fighting instinct is all in the genes.

“It is strange how boxing features so strongly in the family, my sister boxes and is a European champion at 16 and undefeated in 30 fights. I’m not undefeated, it took me a while and I was a slow learner.

“For my brother Prince maybe there are not enough challengers for him at the moment because he is a big boy already and is bigger than I was back then. He is only 12 and weighs 60kilos, so that is pretty heavy.”

Dubois attributes the fact he doesn’t share his sister’s 100 per cent record in the ring to the development of his now ample frame. Growing up he endured more than a few growth spurts that knocks existing coordination all out of kilter.

“Yeah I was like that, big arms and constantly adjusting myself to what I was and going up in weight – I was all over the place!

“I think I’m still growing – hopefully I am.”

Dubois is already a more than sizeable specimen and a force to be reckoned with. The heavyweight boat is about to be rocked.

“It is big men banging at each other. There is so much weight being carried and people expect fireworks from the heavyweights. If you can do a Mike Tyson people will think you are great and I think I have got that explosiveness in my locker.”

It should be well worth a watch and Daniel Dubois will be performing in a ring near you very soon.