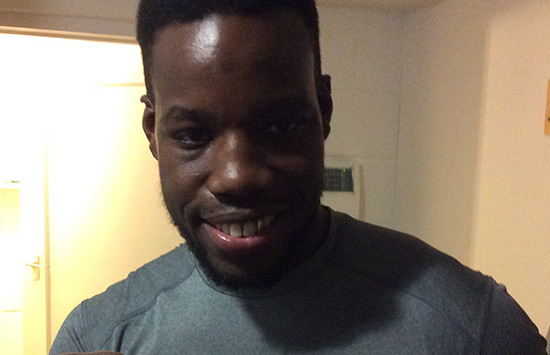 Super middleweight banger Darryll Williams got hooked on boxing at a gym that goes by the name of Double Jab, although for a good while he readily admits the art of actually launching one himself fell outside of his raw repertoire.

The now 26-year-old – recently signed up to fight under the Queensberry Promotions banner – stumbled across boxing at the age of 18, having previously had no great interest in the game.

It was the sound of leather smashing into leather that captured his imagination when he paid a visit to a local gym and heard bag and sparring sessions taking place on the second floor. Previous combat experience had been of the street variety and Williams not long later came to the conclusion that his swarming style that relies on brute force would not be compatible with the amateur code of the sport.

He is not known as ‘Ferocious’ for no reason.

After less than ten three-round outings he turned his attention towards the professional end of the trade and outworked his first five opponents over the distance before really finding his range and KO-ing six of his next eight victims at a variety of small hall venues across the capital – claiming a Southern Area title in his 12th contest.

Ferocious was proving to be force to be reckoned with and he was fully aware that to earn his stripes at elite title level he needed to be fighting the good fight on an elevated platform.

“It’s quite weird how I came into boxing,” recalled the 13-0 man from Forest Hill. “I was never into it when I was young and never watched it. I knew of the odd fighters here and there, but didn’t really pay attention.

“At about 18-year-old I joined a gym in my area and they were doing a few classes upstairs. I heard them knocking about, went up there and since I put on the gloves I have never stopped. I just got sucked in.

“I wouldn’t say I was a natural at it. I knew how to fight because I got into a lot of street fights when I was younger, but if you told me to throw a jab I couldn’t do it for the life of me. It was about adding technique to being aggressive and being a fighter.

“I could take a punch and probably give one. It has been a really good journey for me.

“I didn’t have much in the way of amateur fights, only about nine and I won four or five. I hated the amateurs, it wasn’t for me at all. I’ve always had the come forward, bobbing and weaving, fighting style and it didn’t work for me back then.

“I think it was probably better for me that I didn’t have much of an amateur style and, from the beginning, I only really sparred with professional fighters. Not being too involved with amateurs helped me in the long run.”

Williams has long watched the Skeete-Pettitt axis performing on Frank Warren shows and longed to link up with his iBox Gym teammates on the big stage.

He believes he has served his time on the small hall circuit, done it the right way in learning his craft and building up a following, now he wants to raise the bar and climb the rankings, starting at the York Hall on Thursday when he takes on the Hungarian Attila Koros (9-4-1). 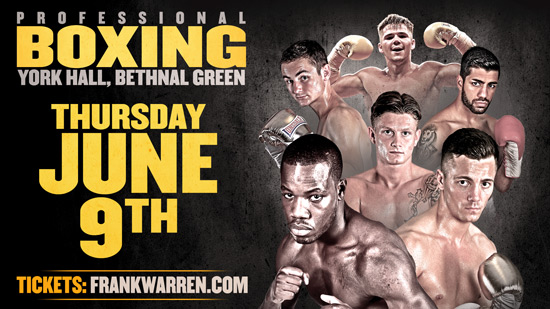 “Signing with Frank was always the ideal thing for me, I’m in the gym with Bradley Skeete, Lewis Pettitt and other fighters who have been signed by him and I just think it is the right path for me to go down.

“They’ve got a good relationship with (trainers) Alan Smith and Eddie Lam and I really think things can start happening for me from this now.

“People say it is the hard way, but I believe it is a good way and the right way. It’s helped me out a lot, I’ve learned my craft and learned everything I’ve needed to. Obviously I will never stop learning, but I think I am past the A-B-C side of it and now it is time to go to the next level.

“Yeah I did believe I might not get the big signing that I wanted to move further on with my career. I was always promised that it would happen, but I just didn’t know when! I was sitting around for a while and one day it just popped up and we were ready to go.”

Williams takes encouragement from recent recruits to the Warren stable, who have benefitted from almost instant rewards under the Hall of Fame promoter. After featuring at the Copper Box in April, Hughie Fury now holds a No.6 ranking with the WBO and Jamie Conlan is now the holder of a Commonwealth title.

“Definitely, those fighters are very lucky to get signed and go up that quickly. So hopefully, you never know, it might go that way for me. All I’ve got to do is keep fighting and keep knocking them out.”

BoxNation exposure also now beckons for Williams, who has previously headlined on a show broadcast by London Live promoted by his manager Mickey Helliet. Growing his profile on a dedicated boxing channel is something that clearly appeals.

“Yeah I had a little dabble on London Live, but I didn’t think much of that was going to boost me anyway,” he reflected. “It is not particularly a boxing channel that everybody is going to be watching and it didn’t really push my profile.

“I had a quick fight on there and now I am going to be on a channel that is constantly about boxing.

“Mickey has done a great job. He is the guy that got me on the small hall shows, got me out fighting and helped me build up. So he has done really well to get me up to this ranking – I am ranked 14th – and it is great.

“Now we have got to move on, get the bigger platform, but he is still involved and that is good,” he added, before noting that coveted British titles are now rarely fought for on small hall promotions, where Area and English titles are, for the most part, top of the bill.

“Most definitely, everyone is aware that staying on those small hall shows without television and just being with those sort of promoters, it is very hard to even get even in the away corner for a British title fight.

“This is the best thing that could have happened to me.”

In preparation for punching his way towards British and international titles, last year Williams clocked up the air miles with manager Helliet and ventured to Vegas to test his mettle Stateside.

Gyms in the UK generally provide a warm and friendly environment, rolling out the welcome mat to all-comers. Across the pond it is more a case of sink or swim. 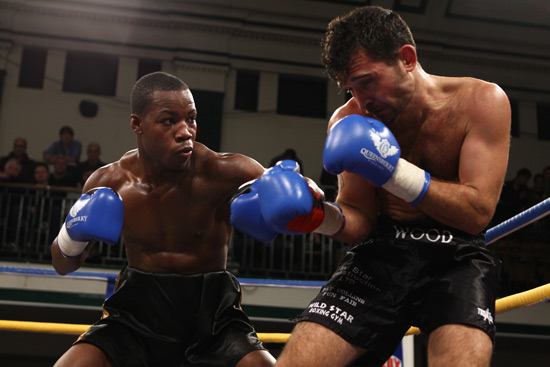 “We took a trip to Vegas last year and went to the Mayweather Gym and the Top Rank Gym as well. The sparring was really intense, not just the sparring, but everything – the heat, the canvasses are different over there and it is like walking around in mud!

“It was an experience that was second to none.

“I definitely held my own – but it was hard! To be honest, the Mayweather gym wasn’t too bad and the hardest place I sparred was in the Top Rank gym with the 2012 silver medalist Esquiva Falcao, the Brazilian southpaw – it was really, really tough.”

Williams was later charged with impersonating an heavyweight once known as the ‘baddest man on the planet’, who also happened to be his own American idol.

A Mike Tyson computer game, that is still in the making, employed him to replicate the moves of former heavyweight champion of the world and the comparison with a man who registered 44 KOs is one he does not object to.

“It was actually a game we made up at Shepperton Studios. I had done it before that for another company but I don’t think it came out, but this one was really good and I saw a short clip of it and was quite amazed.

“It was a company that was working with Mike Tyson himself over in Vegas and it was a good thing for me, especially with my fighting style being based on him. It was good to get in there.

“I think the first time I properly saw Mike Tyson was when he fought Lennox Lewis and, in the first part of that fight, he was still explosive and coming at him. Before that I was young and not really paying attention, but I have studied him and looked back at all his fights since.

“Some people like to compare me with him, but I am super middleweight Darryll and, while I do base my fighting style on what he did, at the end of the day I am me.”

The super middleweight picture is a cluttered canvas at present, with a number of British fighters at the forefront. The likes of James DeGale, Callum Smith and George Groves are operating at the elite end of the market, with others such as Jamie Cox striving for a shot at the top.

If he had his own way, Williams would be happy to take a few short cuts to get where he wants to be, but he accepts his trainers will seek to navigate him through a learning process and he doesn’t expect to be matched too tough in the immediate future.

“I know they’d be some hard fights and probably some easy ones, but there’s no evasive action in that sort of thing from me.

“Of course they will try and protect me as much as possible, which is highly understandable, but in the next 18 months I can see myself fighting for a British title. I don’t know who is up next for it now, so we will see what happens.

“The English is held by Jahmaine Smyle, which is do-able, but there are a lot of other titles to go for that are better than the English. It is about having the right gameplan to go up and what way they want to push me.”

Another goal is to share billing at a big arena with his iBox teammates Skeete, Pettitt and Danny Carr. The Bromley boys out on the bash, so to speak.

A fighting foursome to be reckoned with coming to a ring near you, hopefully, soon.