“They are announcing me as The Cannon now, which is what I wanted more than anything”

HE MAY GO by a name that would look more in place etched onto a plaque outside a solicitor’s office, but DP Carr, so far, is living up more to his much preferred nickname, ‘The Cannon’.

Much like the actor’s union Equity, boxing doesn’t allow for name doubles, so with Dan Carr having 85 fights on his slate, there was no place on the sport’s log book for a new kid on block going by the name of Danny Carr. 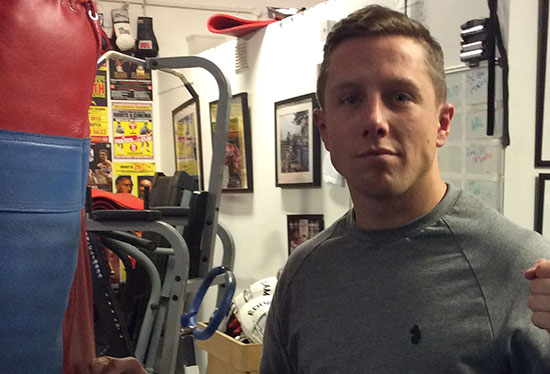 Variations were offered up and rejected before frustration surfaced and it was determined that a straightforward DP Carr would suffice. DP, who nominated Danny ‘The Cannon’ Carr as an option, hopes he will be able to lay claim to his real name in the event of his namesake’s retirement.

“The board said no to me being Danny Carr, then we asked for Danny The Cannon and we don’t know why that got rejected,” explained Carr the younger. “In the end Al (trainer Alan Smith) just said DP Carr to them and it was agreed. It was winding me up in the end so we just went with that.

“I’m alright with it, they are announcing me as The Cannon now, which is what I wanted more than anything.”

The evidence so far from two outings suggest that this cannon can certainly bang. His two opponents, Aaron Flynn and Aleksandrs Birkenbergs have been blasted out in two and three rounds respectively, leaving Carr with low mileage on the clock.

His introduction to the pro ranks was explosive, with Flynn being poleaxed by a clubbing right hander in Harrow. His instinctive immediate celebrations were, however, instantly curtailed by trainer Smith until Flynn has been raised from the canvas.

“I like to make sure everything is alright before I start going too mad,” he reflected on his debut delight. “I did get a little bit excited at first by you have got to think about your surroundings and it is better to be respectful before you start going mad.

“It was brilliant, I couldn’t have asked for anything better. I’ve always had quite a lot of power in both hands, but the right hand is something I have always concentrated on, I used to get told to throw the overhand right all the time. It has always been one punch knockouts with it, so I know that if I catch them right it will make them go.”

Carr is acutely aware that he mustn’t allow himself to become a one-punch wonder and is honing alternative assets at the iBox Gym in Bromley. His second opponent, Birkenbergs, was eventually reeled in by a left hook.

The Latvian, unknowingly, provided Carr with a salutary lesson on the night in that appearances can be deceptive. Birkenbergs took to the ring looking pretty much half his 29 years of age, fresh faced and light at the weight.

Carr himself admits he anticipated easy pickings on the night before taking one on the chops.

“For this camp and the last one we have been working on my left hook a lot more, which is how I finished the last fight and it is becoming more and more natural now. I’ve got power in that one as well so hopefully I will start doing the same with that hand! That would be nice.

“He did look young, but when he came out and I tried to get on him early, he caught me with a right hand and he punched a lot harder than I experienced in the first fight and a lot harder than I thought he was going to as well. I knew then I had to not get caught again.

“I did think that I was going to beat him easily because I knew that he’d been stopped before, but he was dangerous because he had knocked someone out as well. I did look at him first of all and think ‘yeah, this will be alright’.”

After tackling a twosome not possessing huge experience, taking on a seasoned journeyman or two is next on the to-do list for the 26-year-old. While the often once-a-week warriors are not drafted in to dent winning records, Carr knows not to expect any Cannon fodder.

Sheffield’s Qasim Hussain has been muted as a potential foe for his next outing at the York Hall on March 25, an opponent well versed in providing tricky assignments for talented prospects.

“My next fight could be against Hussein, who Archie Sharp fought last, and he has had 40-odd fights, so I am looking forward to getting in with a journeyman.

“It is different, there will be a lot more covering up on their part. I watched the first round (against Sharp at the York Hall last month) on BoxNation because we recorded it indoors and, if it is him, I have got it in my head what I am going to be doing to him.

“I am looking forward to it because I know it will bring me on. People moan about fighting journeymen, but everyone says how much they improve from it. They are not really there to win, but they are not mugs and have been around a long time. If you can get people like that out of there, if I can stop a good journeyman it would make my day and give me the confidence to stop people who come at me more as well.

“I know pretty much what I’ve got to do – keep busy and be clever. He brings his hands high and leaves his body open, so with me punching a bit harder than most people hopefully that will do the trick. Even if it does go the four rounds it will be good as I’ve not done four rounds before.”

At 26, Carr is a more mature novice pro and he explains that his later entry to the pro ranks was down to his desire to ensure he was travelling down the correct career path after taking a sabbatical during his amateur education that spanned some 42 fights, with 31 victories.

“I came here (to the iBox Gym) for sparring before my second ABAs and was thinking about turning pro, but then took an 18-month break from boxing. I wasn’t really dedicated enough and I won’t box unless I know I am really fit. I wasn’t being dedicated so I stopped, took the time off then came back.

“I lost to a couple of people I knew I was better than and it was frustrating me, so I knew I had to walk away from it then, but I always knew I would end up coming back. Now, with every aspect of my training, I train like a pro should.

“I decided to go to the ABAs and it was probably the best I’ve done as an amateur because my dedication was much better. I did well and then approached Al, who came to watch me in the London final, and he said we’d have a go.

Carr, whose father Paul enjoyed a stellar amateur before turning professional himself, believes turning over in his mid-twenties will work to his advantage as he already possesses the maturity and man-strength lacking in younger pros. He hopes this might allow him to venture down the fast track as his career motors on.

“I’ve not been in loads of hard amateur fights, I’m fitter than I’ve ever been and learning more than I ever have. For me I turned pro when I knew in my head I definitely wanted to, I wasn’t before. Suddenly it just clicked in the ABAs when I was giving everyone hard fights and pushing everyone back. I just knew there was more stuff I needed to learn and I knew that Al and the boys down here would help me do that.

“If I had tried three or four years ago I don’t think I would have been ready. Hopefully I can be moved on a little bit quicker. I think we going to do super-feather if I fight for a title,” he added, before stating his realistic ambitions for 2016.

“Just learn as much as I can and remain undefeated, then hopefully put myself into contention for a Southern Area title shot. That is what my goal is.”

Within his own gym Carr has the perfect role-model to steer him in his desire to not become a one-dimensional fighter or one-trick pony. The shot selection of stablemate Bradley Skeete is a veritable pick-and-mix and Carr believes the WBO European welterweight champion is an example of both style and substance. 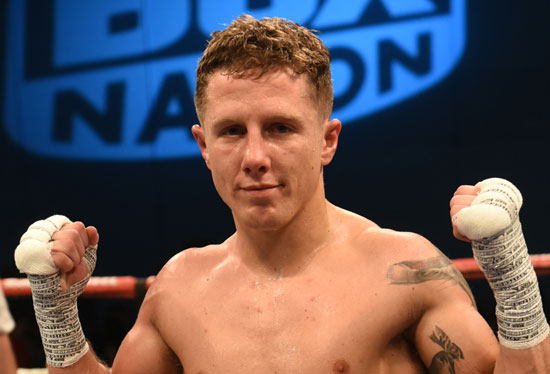 “Definitely, the main thing with Bradley is that he throws ten different types of jabs! His variety in shots is very good and he’s made me see that I need to not be so stiff as well with my movement. Also that I need to be clever because, being a pressure fighter, if I box as well as go forward I will be more effective than when I used to just keep my hands up.”

With a challenge for the British title looming, Carr believes Skeete is a racing certainty to topple the champion Sam Eggington in his Birmingham bolthole.

“I think he’ll stop him between six and ten. He is looking absolutely unreal at the minute, he is quality. Genuinely, people are walking in saying they have never seen him look this good. He will win,” insisted Carr.

Similar to Super Skeete, this puncher has certainly got more than just a chance.