Whisper it quietly, but word has it that the self-styled Hellraiser wants to tone it down a bit, to refine his full-throttle and relentless approach to the fight game. 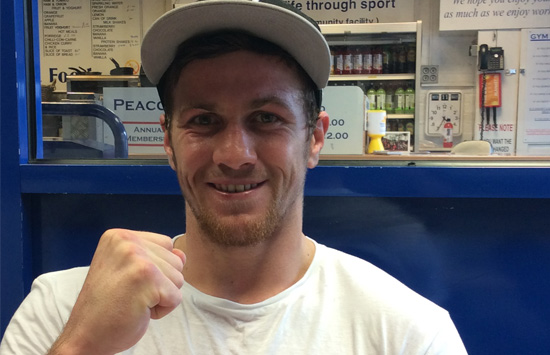 Gary Corcoran is not sure it will actually happen when he steps out under the lights again, but he is going to give a go – for a few rounds anyway.

The unbeaten super welterweight from Wembley is a renowned bruiser who rarely takes a back foot or a breather. His methods have served him well up to now, 15-0 since turning pro at the back end of 2011. He may not be a culture clubber, or particularly footloose, but his swarming style has suffocated opponents of considerable repute.

Corcoran and his team of Peter Stanley and Frank Greaves from the Canning Town college of boxing that is the famous Peacock Gym care little for carefully managed progression up the rankings. Two of his last three opponents were the holders of unbeaten records, while his last hadn’t suffered a reverse in nigh on four years.

The likes of Rick Godding, Rick Skelton and Danny Butler just don’t figure in the plans of ambitious prospects climbing the ladder because they present a clear and present danger to budding reputations – and they don’t make you look good.

The 25-year-old Corcoran doesn’t give a monkeys, he possesses a refreshing, ‘bring em on’ attitude towards everyone in his division – including world champion Liam Smith. Before Butler was drafted in, he was set to battle for the vacant WBO Intercontinental title against the highly regarded Scouse stylist Joe Selkirk – also unbeaten – in what would have been an intriguing contest.

After one aborted match, Selkirk’s retirement put paid to that one.

Fellow Peacock Gym inhabitant Ahmet Patterson has been mandated to challenge for the British title currently in the possession of Liam Williams, a selection that was doubtless the subject of some debate among board stewards when you consider Corcoran’s increasing pedigree.

It is not just in the ring where the young Traveller from Wembley is fostering a patient approach, he knows his time will come and will be more than ready when it does.

“To be honest, I couldn’t really be bothered,” said the personable right-hander. “I’ve fought three good fighters and I could have started moaning about it, but I just said let them two bang away with it and I’ll get the winner. That’s it.

“I’ll get a nice fight before, hopefully a defence of my title and then see what comes from that,” he added before explaining his attempt at a new calculated approach to ring warfare that was clearly signposted in his landslide victory over Butler.

“I’ve always had a good engine, even as a young kid, plus I am improving all the time. Now it is about relaxing a bit more, Frank and Peter are helping me refine my boxing skills and I can do the 10-12 rounds easily.

“It actually does suit me because I can box when I need to box. I just have to be more clever about it.

“I’ve got to pull back and relax when I see the red mist and I can do that now. I’ve learned a lot over the last ten months and I showed it against Butler.”

Corcoran doesn’t have a lot to say for himself in public and one of the sport’s talking heads he clearly isn’t. But does being the quiet man of boxing count against him in this bums-on-seats business? He is unlikely to talk himself into a big fight.

“It is self-promotion, but my hands do the talking. It does and doesn’t count against me. No-one really likes a big mouthed fella do they? If he gets beat, then where is he then?

“Williams-Patterson is a 50-50 fight and I can’t call it. Whoever wins I want them 100 per cent, I want to be No.1 at the weight so I will beat one of them and move on from that to hopefully one day to a world title.

“It is a very good division and, to be honest, at this time I have boxed just as good people as Liam Smith. I’ve fought two unbeaten fighters and Danny Butler – has Ahmet fought anyone like that? I don’t think so. Or Liam Williams.

“I’ve come through in a harder way. No, I’ve not really got the credit, but I have to get on with it and I know what is going to happen in the end. Rick Skelton, who would fight him? He is the most awkward kid I’ve seen in a ring. I just get on with it.”

Corcoran and Patterson are not deliberately kept apart in the gym, but sparring is less than frequent these days because their respective camps know only too well they are on a collision course and sessions could get a little spikey.

Patterson, however, is getting first dibs at a prize Corcoran craves.

“Sometimes we are here at the same time, but we just get on with our own thing. It doesn’t bother me and if it doesn’t affect me it shouldn’t affect him.

“I want to be British champion this year and see where it goes from there. I’d fight Liam Smith next with four weeks notice, I’d fancy it all day and I’d win it in style.

“I think Smith, Ahmet and Williams would be three hard fights. I know I am better than them though and would prove it. I don’t think they have as good an engine as me, are as strong as me and, when it comes to that time, I will be ready for them.”

Corcoran finally caught up with Butler at the second time of asking at the York Hall at the end of March. The pair were set for a Dublin date in February before tragic drama unfolded at the weigh-in with an armed attack on the event at the Regency Hotel that resulted in the cancellation of the show. 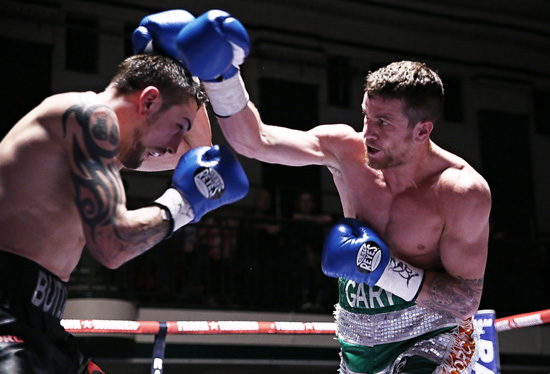 He had already taken his turn on the scales and was a bystander when the incident occurred and doesn’t have too much recollection of events other than survival instinct kicking in.

“It was the same for everyone, I just heard the noise and just legged it, got out of the way and that’s it. There was a bang and everyone just scattered. You found out a bit later what had actually happened.

“We were training all over Christmas and then had to make weight twice in a month. I had a week off with my family and then back to it.

“I was going to have a very big crowd over there with a lot of family, but you have to get on with it and it worked out in the end.”

Plying his trade on the road is not an unfamiliar experience for the Wembley man, who doesn’t object to putting in the miles where training is concerned. Peter Stanley informs that his man has gone toe to toe with some 57 different sparring partners over the last year, with pushing nearly a 100 rounds of friendly fire opposite welterweight world champ Kell Brook.

It is part of a rounded ring education that includes a once-a-week visit to the garage of veteran trainer Les Southey for some old school tuition.

“Peter has counted them! It has been good and he has taken me everywhere sparring, I have been sparring Brook for a while now, Frankie Gavin, Tommy Langford – anyone and everyone!

“I learned a lot off Brook because he is world class and, pound for pound, one of the best. It was very good sparring, I won’t say I beat him up or whatever, but you can’t buy that experience because he is top class.

“Les does all the back in the day stuff and is good. He does fitness, technique and strength with me and is a different pair of eyes.”

The ring was always likely to end up being Corcoran’s place of work. One of 12 brothers and sisters – with a current age range of 13-35 –  growing up on the North London Traveller site, fledgling opponents were not hard to find.

His brothers Eddie and Billy boxed professionally, and Corcoran suspects the more geographically established nature of the modern Traveller community has helped aspiring young boxers fulfil their potential. World champions such as Tyson Fury and Billy Joe Saunders, he believes, will be the first of many from this country.

“My brothers boxed from the age of ten so it was good to be surrounded by boxing from an early age,” he reflected on his formative years. “I wasn’t a natural, to be honest, a few of my brothers were. I just picked it up and, as I got older, I got better and better at it. I stuck at it.

“They are all looking at the likes of Tyson Fury and Billy Joe Saunders now. In the amateur game there are a lot of travellers who are good fighters and they win a lot of competitions. Now they are bringing it into the pro ranks and you are going to see a lot more.

“You are in one place and it gives you the chance to stick with the same gym, the same trainer and you just come on from it.

“I couldn’t see myself outside of London because that is where I’ve grown up and I like it. There are a lot of youngsters, mad little f**kers – and I was one of them!

“There are a lot more travellers looking at boxing now, which is good, but it could be even better and they want to keep progressing in it. There are a lot of good kids all around the place growing up that I have seen myself who win at schoolboy level and ABAs. They just need to stick at it, a lot of travellers love the party lifestyle and when they get to a certain age – 16 or 17 – they just stop.

“Now they are keeping it going and are better for it. I’ve got a little brother boxing and an older one who was in the senior ABA final, but quit and wasn’t bothered. I just kept at it, he was more talented, but once I got older I got better. My younger brother now is 13 and has had nine fights and five stoppages. He is looking at me and wants to do it as well.”

Corcoran may be relentless in the ring and he adopts the same ‘stick at it’ mentality as he pursues his goals with a steely resolve.

“Yes that is me, once I aim at something I want to get there and that is what I am planning to do with Frank and Peter.

When he does, the Peacock will be proud as punch.