“I like to get in and get the job done, that is the bottom line for me”

The 22-year-old Belfast boy clearly carries some clout with 13 out of his 16 victims so far having been defeated by KO, with round four being the longest stay of execution. 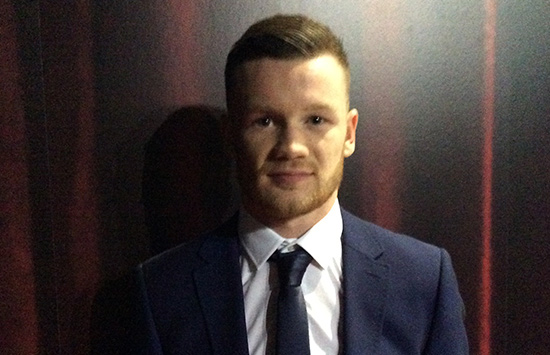 His card has been marked just once in 17 contests to date, while the Irish super-featherweight championship was bagged in just his sixth fight, making him the youngest Irish champion in some 80 years, with the Celtic featherweight title collected in March of last year.

Tennyson’s punching pedigree, further enhanced by sparring with countryman Carl Frampton ahead of his Scott Quigg showdown, saw to it that he was placed in pole position to challenge champion Ryan Walsh for the featherweight championship of Great Britain.

Tennyson is signed up to share a ring with Iron Ryan on Saturday April 30 at the Copper Box. 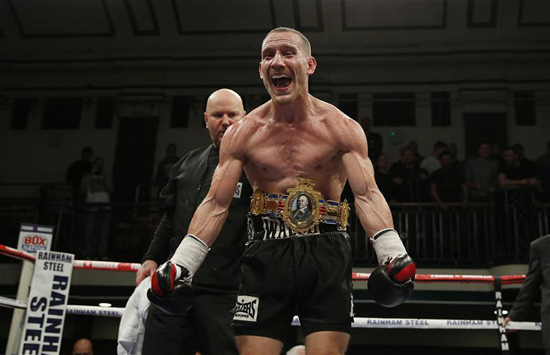 It wasn’t the only signing up to occupy the mandatory challenger last week, when he also signed a promotional agreement to fight under Frank Warren’s Queensberry Promotions banner.

Hooking up with the Hall of Fame promoter provides recognition of his undoubted potential, but also ensures a debut cracker is on the cards when he swaps hooks with the marauding Walsh at the 2012 Olympic arena.

The title shot, hopes Tennyson, will propel him into big time boxing and he points out that undercarding on Billy Joe Saunders’ first defence of his world middleweight title isn’t a bad place to start.

“I think my promoter Mark (Dunlop) and Mr Warren have been talking for quite a while, but I think more so when the British title fight came about,” revealed Tennyson. “Me and Mark had a wee talk saying they have offered us a good deal and are going to look after us, so we were interested straight away.

“It is a big opportunity for me, coming on with Frank Warren is going to bring my career to the next level and my first fight on a Frank Warren promotion is on the Billy Joe Saunders undercard so it is a massive fight and it is going to be a great night.

“I know about him bringing on the likes of Ricky Hatton and Joe Calzaghe, he made a massive career for those guys.”

His crack at securing a Lonsdale belt was all of his own making but, with his new support system now in place, Tennyson is now daring to dream of bigger nights on the horizon.

“Yes I earned this fight myself but, with getting Frank Warren, you can look beyond this fight. If I win this fight I am sure he is going to have a lot of bigger fights lined up.

“I’m only 22 and have made good progress. For my age it is a really good and strong position to be in.”

Examination of Tennyson’s card to date does, indeed, show that his development has been via a staple diet of well seasoned journeymen, but what stands out is they don’t appear to stand up for too long when he gets to work.

Traditionally durable opponents tend to opt for an early night when Tennyson lets his hands go.

“The guys that I am knocking out within a round are doing the distance with the majority of prospects these days, so it shows.”

He does readily acknowledge, however, that Walsh will present a decidedly sterner examination of his credentials and is ready to go to war for the coveted belt.

“Definitely, without a doubt, I can’t take that away from him as he is British champion for a reason. He is a good fighter and it is a massive step up for me but I go into this fight with plenty of confidence.

“He is a tough guy, he took on Lee Selby when nobody wanted to know before he was world champion. He didn’t knock him out and I am going into this fight expecting a tough 12 rounds.

“I wouldn’t really say I have a strongest weapon, let’s just say I like to get in and get the job done, that is the bottom line for me. There has been a lot of talk recently about my upper cuts though.”

Stepping out from his corner at the Copper Box will be the latest staging post on a boxing journey that, you could say, began in the naughty corner.

The sport of boxing has cured much for many individuals over time and in Tennyson’s case it was his childhood tantrums that drove his mother to despair.

“As a youngster of about seven years of age I had a bad temper and me mum couldn’t control me. I was taken to a wee club and it all kick-started from there – as soon as I went in that gym they said I was a natural and what I was born to do.”

Tennyson – and no doubt his mother too – would prescribe a healthy dose of boxing to any troublesome toddler or teen.

“Aye, definitely! After tough nights in the gym it was just bedtime after that!

“So if you have a bad tempered child just throw him in the gym because it just zaps your energy. Look where it has got me.”

With 92 amateur victories behind him and multiple titles, Tennyson is one of the latest off a resurgent Belfast production line that he believes began again with the emergence of Frampton.

“Boxing has really taken off lately in Belfast, it is getting itself on the map. I’d say it is all from Frampton, but there is a lot of fighters up and coming, the likes of Ryan Burnett, myself, Paul Hyland and James Fryers, who are coming up as well.”

With Tennyson now set to spread his wings on the mainland, after previously experiencing victories in Hungary and Estonia, he is already looking forward to a homecoming – a televised one, of course.

“Definitely, I would love to get BoxNation over to Belfast, it would be amazing.”