“My nine lives are running out! You can’t be doing it every time”

THERE IS AN accepted wisdom in the fight game that suggests boxers cannot afford to engage in too many all-out ring wars over the course of a career. Get drawn into one too many and the snap and crackle previously relied on, gradually goes pop.

Jamie Conlan knows only too well, that in two of his last three fights, he has used up a couple of credits.

In July of last year, in a first defence of his WBO Intercontinental super-flyweight title, ‘The Mexican’ met a real Mexican by the name of Junior Granados. To say he was taken to the brink of a first defeat of his professional career would be an understatement. The courage, spirit and resolve he summoned up to salvage his 0 was nothing short of remarkable.

Twice he was chopped down in the seventh round by crippling body shots and subsequently emerged just about intact from literally a barrage of unanswered punches as Granados sought a shock stoppage on hostile territory.

Conlan averted a crisis with the raucous backing from those at the National Stadium in Dublin and strung three winning rounds together to claim a points decision.

Surviving such a harrowing ordeal, Conlan believes, told him a lot about himself.

“It did, I think every boxer has questions about himself that they don’t know the answer to until it actually happens,” he pondered. “I enjoy fights when they get tough, when I am feeling it a bit because I know he will be feeling it too, I like that kind of environment and atmosphere.

“That was a completely different night altogether though, it went full circle. The emotion I went through in that fight was unreal and the crowd were electric.

“People cheer for you in a different way when you are just winning, this wasn’t like cheering as they were like forcing me on and keeping me going. Once that happened there was no chance of me losing, not a chance.

“After the third round – although I didn’t say it out aloud – I thought I am breaking him down here and could stop him later on. Then the next round, boom, it all changed and every punch was like a bloody sledgehammer. From then on I knew I was in a fight and dug deep the whole way through.”

Amid understandable euphoria following his Dublin exploits, the Belfast boy recalled that there was disappointment in some quarters over his hell for leather approach.

“In the changing room afterwards the place was packed with interviewers and photographers, but there were two people who were kind of disappointed – my father and my coach (Danny Vaughan). I felt disappointment as well even though it was a win – with my performance and how the fight went. It was a win, but I took it like a loss and trained harder after that than after any other fight.

“I always watched Morales-Barrera and Gatti-Ward and said I would love to be in one of them, but then as soon as you get out of one you say ‘I never want to go through that again’.

His father John, a boxing man, was not about to get swept along with the drama of the occasion. He knows the abilities possessed by his son and getting sucked into such extreme combat is simply not in the script. A protective instinct also kicked in.

“Yeah he was very hard. He didn’t see it in that way, he saw it as his son in there. He is one of the coaches for the Irish national team and he viewed in both ways, but said that emotion took over and he just wanted to grab and protect his son. It was something he never wanted to go through again.

“He kind of laid that on me after. I went and looked at all the negatives, much more so than the positives and worked on it.”

Conlan is humble enough to acknowledge that he would most likely have been dealing with the doom of defeat had a referee less worldly-wise than Mickey Vann – 71 at the time – been on duty in Dublin. Unanswered punches generally equal a stoppage, but Vann’s experience came into play and he saw Conlan had something left in the tank. 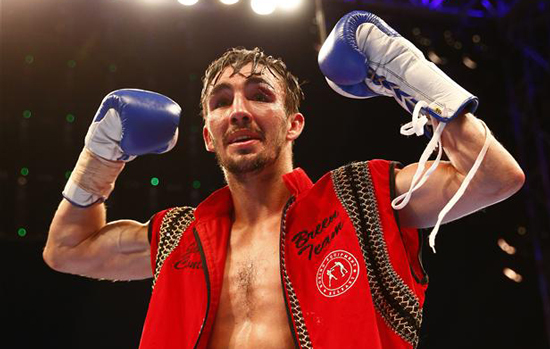 “Yes 100 per cent, he was brilliant that night. When you actually look closely, when Granados put on severe pressure of who knows how many punches in that round, only about three punches actually landed. Any other referee would’ve jumped in as I wasn’t responding, just blocking. But I was defending myself and keeping my senses about me – and Micky Vann noticed that.”

The best laid plans and all that. For as much as Conlan didn’t wish to put himself or his family and friends through another ordeal, one was waiting for him when he took on the challenge of extracting the Commonwealth title belt from the grasp of South Shields favourite Anthony Nelson.

After a routine fourth round stoppage against Adrian Dimas Garzon back in Dublin in November, 2016 has been something of a new start for the 29-year-old. Signing up with Frank Warren, Conlan believes, has completed his team and the first act from the Hall of Fame promoter was to provide him with a shot at the Commonwealth crown at the Copper Box at the end of April.

It appeared a logical next step for the ambitious Conlan, who has eyes on world honours, not to mention a domestic dust-up with natural rival Paul Butler. It turned out to be a hazardous step with more than a few pitfalls and, once again, Conlan was taken right to the very edge of the cliff, only to draw on his inner-strength and haul himself back.

It was put to him that maybe he should change his ring entrance music from ‘Irish Rover’ to the Labi Siffre classic ‘Something Inside So Strong’ – because there clearly must be.

“There must be something inside me that gets me in them as well though!” he joked of his latest plunge into boxing’s deepest waters.

It did, for a little while at least, look like it might be plain sailing when Nelson sunk to the canvas in the first round. If anything, such a promising beginning probably proved Conlan’s undoing because he proceeded to rip up the game plan and chase a quick victory.

But Nelson was made of sterner stuff and went on to poleaxe Conlan in the third, again in the seventh before the challenger, with the cards going against him by at least two rounds, played his joker and unleashed a ripping left to the body. Game over.

“I knew his strengths were his fitness and determination, but I thought I would be able to get him out before 5-6 rounds, just by boxing,” reflected a recovered Conlan. “After the first knockdown I left my gameplan and was trying to knock him out with every punch and it suited him to a tee.

“I slowed everything down too much by loading up every time and it turned into a tough, tough night.”

It wasn’t all about the knockdowns. Conlan had his man well and truly backed up on a couple of occasions before bringing his forearm up high gave referee Marcus McDonnell reason enough to stifle the assault by separating the pair when a more disciplined approach could’ve seen him waving off play.

“It was my own fault, once again, I had him gone and took a step in too close, giving him the opportunity to hold on and I was doing stupid things like pushing his head with my forearm instead of keeping him at arm’s length.

“He was on the verge of going, getting hit with six, seven, eight clean punches. With a few more clean punches it would’ve been over, but I took a step in and ended up overdoing it and trying to do too much.

“I kind of punched myself out in the sixth round and felt exhausted, then in the seventh I was still lethargic and didn’t get going. As soon as I got up in the seventh I knew then I was ok and would get him next round. I couldn’t breath in the corner but as soon as I touched him with the first body shot, it was the key and I knew what was coming and as soon as I let it go it was over.”

So Conlan played the lead role in another night of gripping drama, all the while again causing huge trepidation for family and friends while using up another war credit.

“My nine lives are running out! You can’t be doing it every time. Physically I feel grand, but stuff like that is going to take its toll on the body and I can’t be doing that.

“It just kind of happened in a way I didn’t think it would. The first two rounds were going pretty grand, then it turned on its head and went into a war. When it goes like that I know I will never lose because I know I can go deeper than anyone else. I don’t need to and have got to stop doing it – I could make things a lot easier for myself.

“Everyone loves it when you are doing it, but it is about after your career and you need less of them.

“My dad and brother were the same, that I don’t need to do it all the time and I’ve got to stop doing it for his sake and my family. I’m putting them through a living hell, them and my close friends and MGM and back here in Belfast.

“They’ve all said the same – what the hell am I doing! I’m giving them grey hairs. I say to them don’t worry about this one, I’m going to use my brain, stick to the gameplan and everything I do in camp.

“I know fighters who have tough fights automatically have tough sparring. I’m the complete opposite, I’m on my toes and hardly get hit in sparring. Come fight night, something must kick in and it goes completely different.

“He doesn’t want to see it anymore, he knows I can do it the right way.”

As a result of the Copper Box blockbuster, Conlan might just have some respite from the name of Butler being regularly whispered in his ear. Fair do’s to the now 16-0 man, he feels it is only right to do it all again with Nelson.

“I was the first to say about a rematch and I think he deserves it. Being a proper man’s man, he does deserve it as he gave me one hell of a fight and I pulled it out of the bag with that left hook to the body.

This is one repeat unlikely to attract any complaints from viewers.