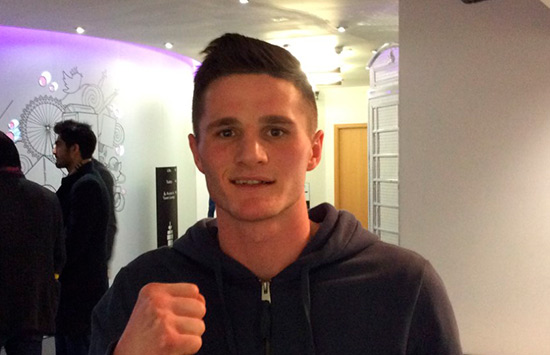 The fighting Leather boys look the same, share the same measurements, are the same weight and both are widely touted as future champions.

So would there ever be the prospect of them getting it on together? Forget it. Not going to happen, not even if they were offered a million quid each, right now.

When the time comes, they’ll have to share the belts between them because, even if the twins were tempted to cash in, these boys know full well who calls the shots on the home front.

“No, I don’t think our mam and dad would let that one go!” they exclaimed almost in unison, before new pro Kalam put forward his own gameplan should the offer of a quick million ever materialise.

“Right Josh, knock us out in the first round!”

“Never. Money is not everything.”

Josh Leather has no need to occupy his mind with fantasy fights and, with respect to his 1-0 brother, he has bigger fish to fry at the present time.

He is rightly ranked as one of British boxing’s brightest prospects, but he believes himself it is a tag he is more than ready to discard.

The 2012 ABA champion, who was scouted by the much-missed Dean Powell and promptly signed up by Frank Warren, considers himself to have progressed into the bracket of contender and has his eye firmly fixed on a first prize as a pro.

When the Middlesbrough-born 25-year-old ventured down to Liverpool to make impressive work of chopping down late substitute Henry Janes last June, his promoter purred afterwards that the super lightweight was ready to step into title territory.

By way of preparation for potentially doing the rounds at championship level, he was afforded a warm-up bout against Gyorgy Mizsei jr in October, but proceeded to make speedy and brutal work of the Hungarian with the delivery of a tree-chopper to the body moments into the fourth round.

Now he wants to get into the belt business.

“I feel like I have done my apprenticeship now and have progressed over the last six or seven fights,” reasoned the executor of five KOs.

“I think I have found my power now.

“It is about getting that power aligned with my speed and, for my next fight, I am looking for some sort of title, an Intercontinental or something like that to get me up there.

“Then hopefully towards the back end of 2017 to go for an even bigger title.

“My last fight was a ten-rounder, a warm-up, and they have promised me my next fight will be for a title. That is what I am looking towards now.”

If the murmurings on the grapevine become a reality then we will have an intriguing clash on our hands.

The name, so rumour has it, in the frame is the Stanford-le-Hope stylist Johnny Coyle, a ring technician with an almost perfect 16-0-1 record.

“Nothing has been announced yet, but that would be a good fight,” responded Josh, correctly hedging his bets until such a time as ink is applied to dotted line.

Along with toiling for titles, Josh harbours a further ambition for this year and beyond and it is to become a major player in revitalising boxing in his native North East.

It has always been a buoyant scene, but one that in recent times has had to go without the big TV promotions to showcase the local talent pool.

Frank Warren is doing his bit to redress the balance, having been a staunch supporter of Josh since day one, he has now added twin Kalam, British title bantamweight challenger Tommy Ward, decorated amateur Joe Maphosa and now former Team GB middleweight Troy Williamson to the North East branch of his thriving stable.

The intention is to once again tap into the pugilistic passion of a region that once turned out in force to witness the likes of Naseem Hamed, Ricky Hatton and Joe Calzaghe perform as they were approaching their pomp.

Being something of a lone ranger up to now, Josh has hit the road for the majority of his fights, but he does not feel this has been to his detriment.

“I love travelling around, to be honest, and all my fans from Teesside all follow me. I am getting a fanbase now and everyone can start seeing what we can do in the North East.

“Not having TV has held boxing up here back a bit but, like Frank said at his press conference, he is looking to put on a show up here soon and I would be looking to headline that.

“It would be a good show with my brother on it as well.

“Hopefully by the end of 2017 we will be getting somewhere and I will be headlining shows and fighting for British titles.

“It has been quiet in the North East for the last year and a half or so and we haven’t had many shows, so we have always had to travel.

“If I was from London I would get a lot more exposure but, if we get it going in the North East, I will get more from now on.

“So it will be good to have a show up there and have it on BT Sport as well.”

With having his first pro fight in September 2013, Josh could be viewed as something of a slow burner in the paid ranks, but he points out that biding his time was for good reason.

It is only in recent ring visits he has found his punch potency, with six of his first seven requiring the services of the scorers. He is now on a four fight KO streak and firmly places his faith in his promoter to plot his next crucial career moves.

“He’s always looked after me, Frank, and has done me well getting me to where I am. He has brought me on great and I am hoping to get that next step now.

“I’ve got time, haven’t I? There is no rush, I have just got my man strength in my last four or five fights and I think it is great that time has been on my side.”

Now is his time to shine because, if he doesn’t get moving now, a familiar face will soon be smiling in his rear-view mirror.

Having Kalam as a fellow pro is forcing Josh to raise his game and finally shift himself into the fast lane.

“Massively, we are in the gym working hard together. He done my camps and got great experience. He is definitely pushing me harder now and we spar with each other all the time.

“We just want the best for each other and hopefully in a few years time we’ll have a world title each.”

Like with the Klitschko brothers, just don’t count on a unification clash.

Tomorrow in Punchlines – which way will Joe Joyce jump