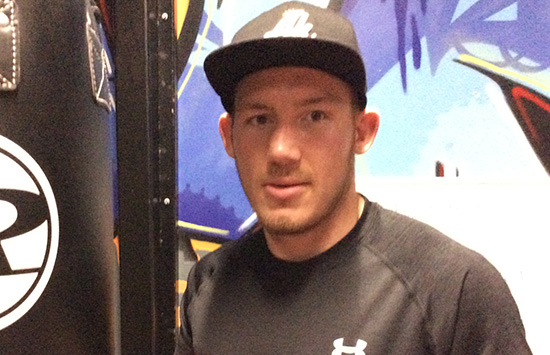 Not much more than a year ago, Liam Williams was contemplating the prospect of rejoining the workforce in his native Wales. A serious hand injury – signs of surgery are still detectable – cast considerable doubt over his future in the game and trying his hand at something else looked ominously on the cards.

To say he came back with a bang after his year out of the firing line would be an understatement. The bang was directed flush on the chops of Kris Carslaw last December in Manchester, with the vacant British super welterweight title on the line, Williams announced himself as back in business in a brutal fashion, stopping the Scot in the opening moments of the second round.

As timely reminders go, this one was one dispatched with ultimate force and the boy from the valleys was back in the picture and ready to push to the forefront.

Two fights later – the first being a tickover in Liverpool against the Argentinean Gustavo Sanchez – and Williams is now the hottest ticket in town.

The 24-year-old wanted to fight his battles on the homefront and his promoter willingly obliged. Big TV shows had been absent from the Principality for a period of time and Williams was more than happy to play the role of poster boy, nigh on packing out the Ice Arena in Cardiff for his first defence of his British title against Wembley’s Gary Corcoran.

An 11 round war followed on a memorable night in Cardiff that also saw Terry Flanagan make a third defence of his world lightweight title and the Cuban great Guillermo Rigondeaux crack the jaw of unlucky challenger Jazza Dickens.

Williams admits he has occasionally paused for thought on his change of circumstances. From being hamstrung by a fractured hand to being a widely considered world champion in waiting in just over a year.

“Yes it is obviously quite a dramatic change,” he readily conceded. “Not much more than a year ago I thought I wouldn’t be boxing again to winning the British title in Manchester – now I’ve got my second home show coming up soon.

“So it has been a dramatic change and it (clinching the British title) was a good win for me. I introduced myself back in a good fashion and now it is amazing and good to be fighting back home and giving more people the chance to come and watch.

“To be honest, at the time it was really bad and it was a hard time for me but, looking back, possibly it could’ve been good because it refreshed me and made me realise how much I actually love boxing.

“It reminded me how much I enjoy it and how much I don’t want to have to go and work on building sites and stuff. I am being given an amazing opportunity – a second chance – and I will grab it with both hands now.”

The onus was on Williams to make boxing work back in Wales and he personally distributed some 1,300 tickets for an event that demonstrated there is a hearty appetite for the sport in his homeland.

The clash with Corcoran caught the imagination for more reasons than just Williams enjoying home comforts. It was a domestic match-up between two unbeaten and hugely ambitious fighters who weren’t about to exchange anything in the way of pleasantries.

It is the sort of duel the fight public crave and even two world title contests were not going to knock it off its top billing.

“There is something about it, it gives people more of a buzz and gets them excited,” he concurred. “A lot of people were saying well done for taking the fight so soon to both me and Gary, putting our unbeaten records on the line.

“For me it wasn’t about that, I want to be in good fights, whether it is against someone unbeaten or not – as long as it is a good fight that people want to see.

“I know some fighters get a bit funny about taking a hard fight and risking losing, but that is what boxing is all about and you have got to take chances.

“They kept me until last, which was good, but mainly because of the number of tickets I sold. It was pretty mad and they all came out in numbers.”

Williams sent the vast majority of the crowd home with a smile on their faces, but the same could not be said for himself. He was annoyed over perhaps trying to put on too much a show for his audience, rather than relying on his boxing to bring about a conclusion.

What he did do is provide some resounding answers to those who question him, those who asked if he had enough in the tank to go down the stretch or whether his fabled punch power would carry enough clout to disorientate someone as game and durable as Corcoran.

Doubters were duly convinced – the critical assessment came from the man himself.

“Yes I did try and put on a show and I am still disappointed. Obviously I wish I could go back and change a few things, but the past is the past now and I had a good win. I ticked boxes, I’d only ever done eight rounds before and I went into the championship rounds and proved that I still had plenty in the tank to take someone out after 11 hard rounds.

“So I ticked a lot of boxes, but I am still a little bit disappointed at the same time because I could’ve made it a lot better.

“There was a lot of pressure on me having sold a lot of tickets and I was the main attraction for Wales, but I tried to play it down, but it is difficult when you’ve got four thousand people screaming.

“I got a little bit carried away, there was a lot of talk beforehand and me and Gary had a bit of a personal dislike for each other. If there wasn’t that I think it could’ve been a better fight than it already was.”

The soundbites from the Corcoran corner did suggest a train of thought that Williams would wobble in the later stages of the fight. For his part, Gary Lockett trained puncher was disappointed the challenger didn’t make good on a promise to meet fire with fire.

“They are deluded and stupid people, who obviously haven’t got a clue what they are talking about. They thought it would be an easy fight, Gary was saying he would meet me in the middle of the ring and we would see who was on the back foot. Those type of things, but all he did was run away from me all night.

“Don’t get me wrong, he stood and traded for patches of the fight, but the majority of the time he was trying to get away from me.

“I thought it was going to be an all-out slugfest, he was going to come and I wasn’t going to back down because I know I am strong and fit – and I know I can punch.

“So I was never going to back down, but he didn’t back up his side of the deal, he said he was going to have a good go and all he did was run away. I obviously hurt him early on and he wasn’t really interested in too much more.

Welsh fans now have another date in the diary to look forward to, with Williams set to face another with a perfect record from the Peacock Gym in Canning Town.

The 17-0 stylist Ahmet Patterson is next on the hit list at the Motorpoint Arena on October 22 as Williams takes one of the toughest treks going in order to make a Lonsdale Belt his own. 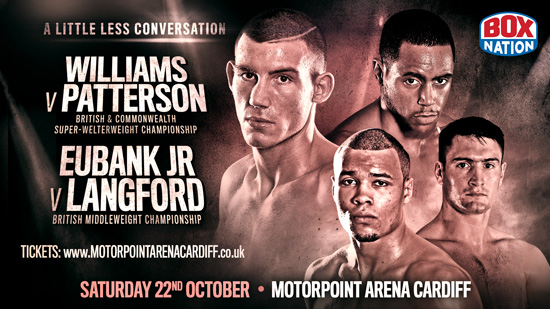 “We are straight back now against another unbeaten fighter who I believe is a better fighter, so I need to step it up again this time. It is a bigger arena too, more in the centre of Cardiff, so it will be a lot better access for people.

“I don’t think he will bring so much pressure and will make me wait.

“I have seen him a couple of times and I think he is a very good fighter, I think it will be tough, but I am confident in my ability and it will be another win for me.

“He is definitely not going to try and walk me down, although if he did it would be a bad move. He is not stupid, he is a clever fighter and they will come with a good gameplan, but so will I and I believe I will beat him.

“We watched him on BoxNation a little while back and he seems a tidy enough guy and appears respectful. He has confidence like me, I don’t try to come across as cocky, but I am very confident in my own ability. Without belief I don’t suppose you have got anything really.”

While winning his belt for keeps is a natural ambition, it is not one Williams is prepared to become a hostage to. Should he overcome Patterson in another British blockbuster he will, of course, be looking upwards rather than sideways when assessing future opponents.

The name of Liam Smith won’t be far from the lips of commentators, regardless of whether he retains his WBO title against Canelo Alvarez or not.

“Yes 100 per cent, I believe there will be opportunities to move on and if something comes up that is bigger then I will go, but I would like to win the British title outright as long as it suits my progress. I won’t hold myself back for the sake of winning it outright.

“There has been a lot of talk about Liam Smith, but he has got his own tasks in front of him and I’ve got mine. The outcome of both of our fights will dictate what happens with us in the future, but I am not thinking about Liam at the moment, I need to do my own job and I wish him all the best in doing his.

“Down the line it is definitely a fight that everyone wants to see. I believe he is a good fighter and I believe I am. Obviously at some point we are going to cross paths, especially with having the same promoter, which makes it easier to make the fight.

“One fight at a time, I need to get through this defence, which I don’t think is going to be easy as I rate Patterson and think he is a cute fighter.

“It is a hurdle I have to get over, but I am looking at bigger names and want to get at least a European title, if not a world title shot. We are looking to go up and keep moving forward.”

Onwards and upwards all the way now – a year really is a long time in boxing.