IT IS A good time to be in the weight division with no limit. The big fellas are box office again, they are back in fashion and now, probably more than any point so far in this century at least, is the ideal time to be jumping aboard the British heavyweight train. 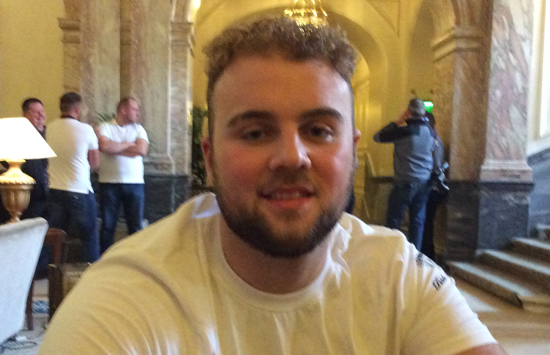 Young Nathan Gorman is only just departing on his own professional journey after a brief stint in the shorter form of the game. He knows the score and wants to get in on the act. Big is beautiful at the moment and the promoters and public at large just love a heavyweight slugger.

The fact that three quarters of the recognised world championship belts currently reside within these shores only adds to the aspirations of the young pretenders. The once stagnant pool dominated by the Klitschko brothers is now an ocean of opportunity thanks to Tyson Fury’s raid on the Rhine last November.

Tyson will do it again with Wladimir as part of a BoxNation bonanza of boxing over the coming months, but the winner will still be shortchanged thanks to the IBF removing their belt from the equation, one that has subsequently landed on the lap of Anthony Joshua after Prince Charles Martin fell at his feet and abdicated his crown without much of a fight.

But it has opened up the heavyweight landscape and got the punters talking boxing again. Not a bad time for Gorman to be introducing himself to a wider audience.

That is what he will be doing on April 30 when he is booked in to punch his considerable weight in front of the BoxNation cameras for the first time at the Copper Box.

“It is the next step for me, to hopefully be televised and being on a big bill – it is my third fight and I am looking forward to it!” said the 19-year-old Ricky Hatton-trained prospect.

The chance to appear on the ‘Channel of Champions’ is as a result of Frank Warren linking up with his former charge Hatton to offer the Manchester man’s stable a showcase on major promotions.

As is the case for any rookie pro, however well you might be doing in building up a record, it is not until the opportunity knocks to step out under the television lights that recognition really gathers pace.

“Of course it is, it is getting on telly and getting exposure,” reasoned Gorman. “That’s all I need.

“It is taking that next step. I need to bang a few out and get people interested in me, that is what I want.”

Although just banging out imported bodies is not the Nantwich man’s primary objective as he genuinely wants to learn the ropes and do it tough, noting the example of now fellow BoxNation heavy Hughie Fury, who has clocked up the rounds and served his time over his ring apprenticeship.

“That’s how I want it to be,” he said. “Hats off to Hughie and Peter, they are doing him right. He’s getting good fights, they are getting the rounds in and that is what I could do with. He has had 19 fights within the space of three years, so that is very busy with doing the rounds as well. That is what I want to do.

“Over the next 12 months I will hopefully be over 10-0 god-willing, get ranked in Britain and see where I go from there.”

Gorman is not just taking a punt at the pro game, his amateur stay may have been short, but was not devoid of sweet moments.

He was drafted into the GB set-up after just nine fights, but plumped not to stick around for an Olympic cycle after hooking up with Hatton for a pad session fixed up by his manager, Mick Carney.

Mixing with the former world champion in Manchester only served to further fuel his desire to try his hands in the paid ranks.

“I was a very inexperienced amateur and only had 11 fights to be precise. I was on the GB podium potential squad, I won the ABAs, I won the Three-Nations – all within three years of properly taking to boxing. It accelerated from there.

“I then got invited down to Ricky’s gym to do some pads with him and he invited me back. I started going down once a week and I was keen to go pro, it’s all I ever wanted to be when I started boxing.

“Ricky offered me a contract and I grabbed it with both hands. All this happened to me within the space of 11 fights, so I think that has got to be record!

“I didn’t really want to wait years for it (the Olympics) to come around, I always wanted to go pro and that was my mindset, to be a professional.”

Gorman is in good company at Hatton’s boxing hub in Hyde, with a healthy mixture of contenders and prospects being guided by the former two-weight world champion and fan favourite.

“Oh yeah, he’s got Sergei Rebchenko, he’s in the top five and so is Kirill Relikh. We’ve got the Upton Clan, Reuben Arrowsmith, who was four or five times national champion, we’ve got Sam Evans, who is a strong welterweight. So we’ve got a strong team behind us and I think Rick will do well with all the fighters because he is a very good trainer.”

Hatton is famous for fun, for not taking himself too seriously and being very much a man of the people. Even if Gorman were to become world champion, he knows full well that the measure of public affection would be unlikely to reach the level enjoyed by his trainer.

For Hatton, however, the gym is a place of work rather than play.

“Yeah because it’s Ricky Hatton, the people’s champion. In the gym though he is proper serious and if you do one thing wrong he pulls you up over it. Honestly, he is dead serious,” added Gorman, feeling the need to reinforce the point.

Gorman’s career card to date features two wins, the first over Jindrich Velecky (19-38), which ended in a third round stoppage, followed by a points win over the Pole Jakub Wojcik (7-13-2). Next up is a Croatian test in the shape of Hrvoje Kisicek (11-21)

“I’ve had two in Walsall, my debut was in December and I got a third round stoppage,” he charted. “Then in February I went the distance against a tricky opponent, a hard to hit southpaw who was very awkward.

“I got hit myself! I’m trying not to though… It’s only one round more than amateur and you’ve got to make sure you do enough to win when it goes the distance.

“My next one is a four rounder against a Croatian and then hopefully I will move on to six rounders after that.”

Keep winning and it won’t be long before his name is being mentioned in connection with the British big hitters. With Fury at 27 and Joshua at 26, time is on the side of the new entries in the heavyweight charts to play catch up.

“I think the British heavyweight scene is booming at the moment with the likes of Fury, Joshua, Haye – along with (Lucas) Browne on the world scene.

“Yeah it is good timing for me. There should be some interesting fights in a few years to come, but I’m just going to keep going and see where I end up. I’m not here for talking, I’m here to box.”