THERE CAN’T BE too many rookie fighters who have their post-debut interview chat watched by in excess of 55,000 viewers. 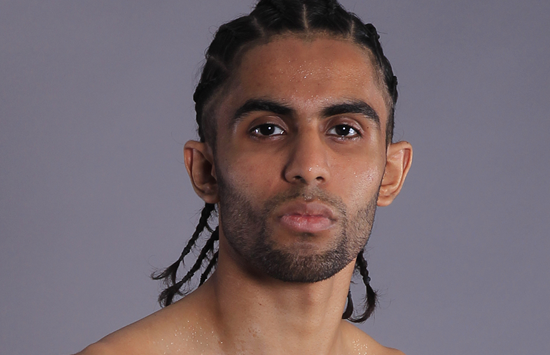 To achieve this internet hit, Prince Patel essentially conducted a 15 minute love-in with himself on the popular online boxing channel IFL TV. The notoriety he generated in getting his name out there and on the lips of boxing fans also, he now accepts, created a perception of him that is out of tune with the reality.

Yes the Prince wants to be a showman with the attention that comes with it, but he is also fully aware that he went overboard – and has done so again since – for a novice pro who currently has a 3-0 ring record.

It was a first round stoppage victory over Patrik Kovac that preceded the now infamous interview and, while he insists the spiky spiel was not premeditated, the 23-year-old concedes that there were people around him during the one-sided exchanges and he was indeed playing to the crowd.

“No it wasn’t,” said the Blackburn-born flyweight, who resides in Acton. “There were a lot of people around me and there was a lot of adrenalin going through me. I don’t care what anyone says, your pro debut is a defining point in your life and you want to make a statement. That is what I basically tried doing.

“I was quite pumped and I would say yeah definitely I was playing to the crowd. I didn’t think it would be watched so much, I just thought a few people would say ‘what a dickhead’, but it went round everywhere.”

In the aftermath of his online introduction, Patel was happy to carry on playing the panto villain in subsequent interviews, but knows himself that he should have reigned it in a bit and plans to play the role of Prince Charming on more occasions in future.

“Yeah I did, I definitely got carried away with it all,” he confessed. “I am not going to carry on doing too much of the dumb stuff like the women references or sexual innuendo because there is no place for that in boxing.

“I am going to stay a showman, but with the right stuff, because there are kids going to be watching the sport of boxing,” he added, agreeing that he requires credibility via his ring exploits.

“That’s right, I just want to be active and show people that I actually can fight and I’m not just a guy who is talking. I semi-proved that in the amateurs and now it is about showing it in the pros.”

Patel was signed by promoter Frank Warren ahead of his second outing at the York Hall in July of last year when he outpointed Brett Fidoe, but perhaps more memorable will be his pre-bout strop that was caught on camera when the entrance music was not to his taste.

“I know, I know…” he sighed before taking up the story. “I was on the stage waiting for him to enter and I heard some terrible music and I was thinking I was lucky not to be coming out to this – but it continued playing! I started getting a bit upset and because it was the York Hall it was seen and filmed. I would just come out now because it is only a song at the end of the day.

“I like the razzmatazz, but it went out of the window that night and I made an idiot of myself.” 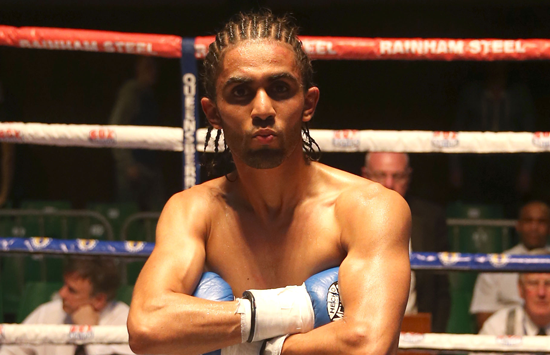 Making hard work of foiling Fidoe provided Patel with something of a wake-up call and prompted a change of trainer that was initially planned for after his debut outing. His preparations are now conducted by veteran trainer/promoter Mervyn Turner out of the Shamrock Boxing Club in Luton.

“I was planning to change after my first fight but it was more important for me to find a promoter,” he explained. “I was really amateurish, I knew that and also thought I wasn’t strong enough and was walking around at light-flyweight. It wasn’t really working but I had to stay with it because I had another fight and, thank God, I came away with a win after talking so much.

“It was a huge reality check. I thought to myself that I am talking so much rubbish, but I know I can fight and am good enough to achieve things, so I shouldn’t be having competitive fights with journeymen. I knew I needed to fix myself up.”

The most recent and probably most regrettable entry on Patel’s charge sheet since becoming a pro was his appearance on BoxNation’s live chat show, the Boxing Hour. Looking to emulate the hyperbole of US wrestling, Patel chose to disrespect the achievements of former world champion and channel expert Barry Jones.

The fall-out and condemnation was immediate and the panto villain was trending on Twitter once more for all the wrong reasons. Patel concurs that disrespecting elders goes against the very heart of Indian culture and sincerely regrets his trash talk.

“I know. Honestly where that came from was that I am a big wrestling fan and when they are shooting promos they are often disrespectful to someone else. I was going for something along those lines, thinking how can a scripted sport generate so much publicity? I copied that. It backfired badly man!

“It wasn’t really planned, I was going to say something about him then it escalated. It was only supposed to be a little dig but turned into something big and ended up being another video that everyone was talking about.

“When I left the room and thought ‘did I just do that?’ It is another video where I have made an idiot of myself… I have apologised,” he revealed, adding that there was no mother’s pride in his interview technique.

“Oh yeah, I attempted to show her the Barry Jones one, but she was not happy with it in the slightest. If I am lucky enough to get back on the show I won’t be doing anything as dumb as that again.

“My mum doesn’t watch any of my interviews anymore. She didn’t even watch the first one, she just saw the title and gave me a rollicking.” 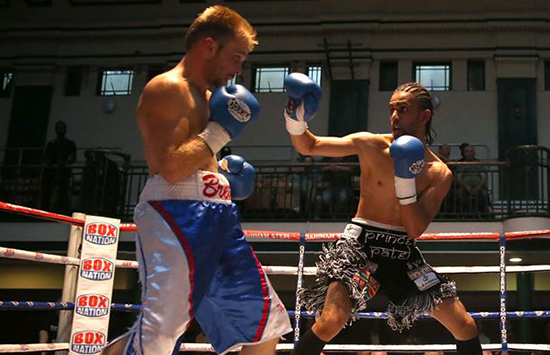 The Prince is seeking redemption through his punching prowess and defeated the unbeaten David Koos in his third fight and first under the watchful eye of trainer Turner. A strong ambition for 2016 is to attach his Prince’s carriage to the Vijender Express as the middleweight and fellow Indian trailblazes his way up the professional ranks and attempts to establish the sport of boxing in his homeland.

“I see this as similar to Ricky Hatton boxing on the Michael Gomez and Arnie Farnell cards,” he reasoned on his link to Vijender Singh. “I have been told that Ricky started off selling only about 80 tickets, but when they retired their fans went on to support Ricky.

“I hope personally, because I am going to behave myself, to be able to go out to India for Vijender’s home debut and hopefully can showcase my skills and show that there are a few Indian boxers.

“I would definitely love to go out there. I think I have got a unique style and pray that I can be part of it.”

The Prince is also hoping to crown a productive 2016 with an ambitious tilt at two titles.

“I want to win a WBO Asia-Pacific belt in India and a WBO European belt in England, then try and get myself up the rankings and push on. I want to be very active, I would love to be on all of Vijender’s shows so when they watch him they automatically watch me as well.

“I am a lot better than I have shown to the public so far.”

Patel sheepishly revealed that the timing of his decision to punch for pay was, in fact, dictated by outside forces, not to mention a strong desire to avoid a 9 to 5 existence or further education. The ring was always likely to become his office, but he was given a little nudge in the right direction.

“When the job centre started getting on my case to find a job! They wanted me to do work trials, but I wasn’t going to do that and was looking for any excuse possible. But I knew I was actually a good boxer and I needed to do something because my mum was on my case as well. It was like you are going back to college or you are getting yourself a job!

“I needed the focus and I knew I was always going to do something within boxing, it was just a case of when I decided to go pro.”

Patel now vows to channel that focus on his ring craft and let his punches do the talking in future.