“I would rather go in at the deep end, fight good people and make a name for myself” 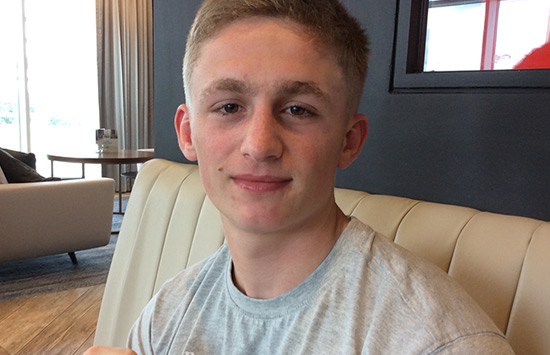 BoxNation viewers were offered a glimpse into the fistic future last month when the cameras were stationed at York Hall and primed in the direction of some of the finest prospects in the south of England.

There were a number who impressed on a sticky, humid night inside the old fighting fortress, but there was one debut display not too long after the doors opened that was particularly eye-catching.

Ryan Garner may carry the appearance of a young lad who has just completed his GCSEs and looking forward to the summer holidays, but then looks, as he points out, can be deceptive.

He is just 18 with choirboy features, but he has something of the devil about him. Picking your options at school normally involves choosing the subjects you have got the best chance of passing exams at. For for the schoolboy Garner, boxing was the necessary option above all others because his specialist subject, he confesses, revolved around being top dog in the playground.

There were fighting instincts in need of harnessing and channeling in an appropriate direction. Mums are not always the biggest fans of sons gloving up, but Penny Garner was all for it, embracing her boy’s sporting discipline and even tailored her household catering to his culinary requirements.

Despite his love of a playground scrap, Garner refutes the suggestion that he might have bordered on being a bully, while a lingering memory of his older siblings dabbling in boxing at the local gym prompted his own journey down the ring road, where he could throw punches to his heart’s content without the threat of landing a detention.

“Looks are deceiving I guess!” he reflected with a sheepish grin and soft Hampshire twang. “Every since being little I have always been fighting, my brothers, people at school – I’ve always been in trouble for it. I think it is something that just came naturally and I’ve always loved it.

“I was a little shit! Not a thug. Just fighting and misbehaving all the time. I can’t properly remember why I went up there (the gym) in the end but, when I did, I just got the bug for it. Sparring all the time and I just loved beating people up I guess – without getting into trouble for it.

“My mum makes sure I eat good and has a go at me if I’m not training. I get proper nagged at. A lot of mums don’t like it, but she is proper proud of me and that is a good thing because you don’t want to upset your mum. I did have a blip of not going training for a bit and she was in tears, fearing I was going to throw my life away. It was just a little blip though.

“You don’t want to be one of those kids who is out every weekend partying it up or getting in trouble with the police, so I want to carry on boxing and make a good name for myself and make a career out of it.”

Most of Garner’s age group would be completing their studies around about now, with education now extended to the age of 18. Early release is granted to those embarking on an apprenticeship, but a career in carpentry proved a short-lived experience.

Boxing was his business and evidence was stacking up to suggest he could make a good go of it, given he reached minors finals at the age of 11 and went on to win two schoolboy championships, reached the quarterfinals of the world junior championships, as well as bagging European gold at junior level.

He amassed a tally of 56 amateur contests, with 41 wins, while representing England on 19 occasions.

“When I left school I had an apprenticeship, so I did that for six months and it wasn’t for me. I couldn’t get up at six every morning and I was coming home at five and then I had to go training at seven. I was knackered and couldn’t do it any more.

“I didn’t have my first fight until 11 and got to the final of the minors championship and I thought if I can be second best in my first national championship I must have something.”

What he also had from an early age was a burning desire to turn professional at the earliest opportunity. The appeal of appearing at the Olympics was too long-winded an option for the eager featherweight.

“I’ve always wanted to do this as my style is more suited. I would be 22 by the time the next Olympics comes around and I’m not waiting that long. As soon as I turned 18 I wanted to turn over.”

Predictions of a glittering future are rarely reliable after a single pro outing, but Garner did look the part against Ricky Leach on his opening night. Leach played his part too, at 27 and in just his ninth fight himself, he is hardly a grizzled old stager just out to frustrate and he did show a few flickers of ambition until he was chopped down in the first by a rib-tickler.

After rising from the canvas Leach did go more into opponent mode and the fight followed a familiar pattern for new kids on the block, with forearms taking the brunt of the inevitable assault. The Southampton boy stayed impressively on his case and forced a stoppage just over a minute from the final bell.

“It was better because he was more skilful than your average journeyman that comes in from abroad, but I feel he still tucked up a lot,” recalled Garner. “I feel that when I start fighting people that open up more, it will play into my hands. To try and land clean shots when your opponent is just tucking up is harder.

“I was really happy, I was still getting my shots off and using my angles, even though he was tucked up. I’ve watched it back around ten times and I know next time I will be a hundred times better again with the rust being out of the way. It will not be new to me next time, getting in the ring in front of so many people.

“After I dropped him in the first round with a body shot, he just kept tucking up and I thought ‘I’m not getting him out of here’. I wanted to because it is the icing on the cake and I battered him all night really. I was hitting him with everything and when Ian John Lewis waved it off I was over the moon and loving it.”

Turning over at such a tender age often results in the prodigy being protected and indulged with numerous ‘learning fights’ to assemble a marketable ring CV. This kid has no wish to hitch a free ride down Easy Street.

He backs his ability and clearly doesn’t want his boxing apprenticeship to extend much beyond the brief career he carved out for himself in carpentry. He wants to learn on the job and, if he has to take a loss on the way, so be it.

Whether such youthful exuberance will eventually be reigned in by his handlers remains to be seen, but his current desire to accelerate his progress is both genuine and admirable.

“I want to work my way up the rankings straight away. I’ve been sparring people like Liam and Ryan Walsh, who are British and Commonwealth champions, and on Tuesday I am going to spar Josh Warrington.

“It makes me think, if I am holding my own, that I just want to go up the rankings and don’t want to just fight journeymen. Some people just want to build up their records, don’t they? Records are for DJs and I would rather go in at the deep end, start fighting good people and make a name for myself.

“It is hard to say this with me being so young, but I don’t think age is a problem. I feel good and have been holding my own with British champions in sparring. Because of my age it gives me time to build, but I don’t want to hang around too long. People will stop coming to watch you if you fight bums who don’t fight back all the time.

While he will obviously not give up easily on the cherished boxing bling that is an ‘0’ on the record, coming up short in a 50-50 is not something that strikes fear into this young fighter.

“You don’t want to lose, but not really, no. As I found in the amateurs, when I lost was when I learned more and got better. I made myself better and improved as a fighter after a loss.

“So if I were to lose, in the long run, it could be better. I am hoping to not lose though! All the legends have all lost – other than Mayweather – so that isn’t a problem.”

Garner is clearly not one for biding his time or playing the long game, so a wait of some 15 months between his amateur swansong and professional entrance must have tested his patience to the extreme.

Trainer Wayne Batten had been getting it in the ear ever since he signed on the dotted line for Frank Warren to plot his pathway in the professional ranks, someone Garner believes has the perfect credentials to steer him to the top.

“So five months later I just wanted to get in there real bad.

“I train with Joe Pigford, who is signed with Frank, so we went and had a meeting with him. We got on really well and it was the right move. Think of all the people he has had over time, Naz, Hatton – all the good people you can think of he has guided them, all the world class fighters from Britain.

“He puts more time into young fighters and properly builds them up. In time that will be much better for me, I want to get built up the right way.”

Garner is reminded of an interview from his amateur days in which he named Ricky Hatton as the fighter he likens himself to, before pointing out a deficiency in the style of the former two-weight world champion, who he suggested suffered from a lack of head movement.

Not for a second demeaning the achievements of the Hitman from Hyde, he stood by his assessment, while also stressing his admiration for the brutal body punching administered by Hatton in his heyday.

“Yeah, I genuinely believe that, but I’d be happy to win what he has, come on! But if you watch his fights he had no head movement and just came forward.

“I loved his body punching and it was how I put matey down, with a left to the body. It is all about angles and that is why I have been watching Lomachenko so much. He won’t lose again, he will move up to lightweight and win a world title. He is the best.”

Garner has September pencilled in for his next outing and will accompany stablemate Pigford when he appears on the bumper Cardiff card on July 16 against Rick Skelton.

He is happy to keep hitting the road as he punches his way up the rankings, but hopes one day himself and Pigford will become the poster boys for bringing professional boxing back to their home town.

“Looking at the big picture, hopefully me and Joe are the future of Southampton boxing.”

Garner is a young man in a hurry, so here’s hoping he’s not kept waiting too long for his home comforts.