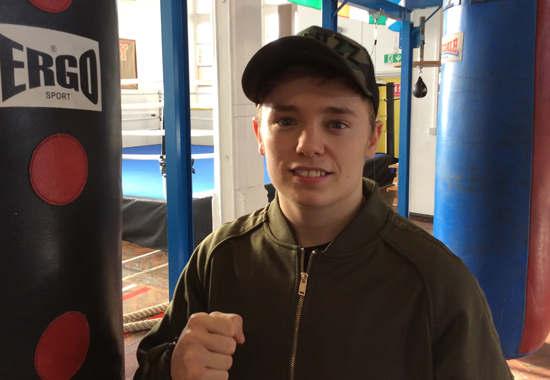 Being bumped off the plane to Rio without being granted an even break when it came to jostling for a seat convinced Sunny Edwards to collect his boarding pass and divert to the pros.

The fleet-footed flyweight, who Frank Warren has recently added to his burgeoning squad, could’ve been forgiven for suspecting he was in pole position in the race for an Olympic spot at the 2016 Games, after victory in the Senior ABAs parachuted him onto the GB platform.

The fact he claimed a notable scalp along the way – that of Galal Yafai – only served to fuel his belief that the road to Rio was mapped out in front of him.

The trouble was, those calling the tune in Sheffield appeared to have other ideas right from the off. They were already backing another rider and weren’t about to switch horses.

The favoured fighter, it appeared, was Yafai, despite Sunny’s side being very clearly on the up. Opportunities to pin down the flyweight place on the plane were put on the plate of the Birmingham boy, with Edwards and the other contenders forced to fight over the leftovers.

“There were a lot of factors that I took into account,” recalled the 21-year-old on him opting to embark on his professional voyage. “Firstly, I got onto GB after winning my sixth national title – my first senior ABA – and got straight on.

“I was training there non-stop and got right up for it. I got on at the same time as Galal Yafai, who I had boxed and beaten in the semi-finals, so with getting on the squad I was thinking, if anything, I’d be a bit above him for selections and getting put forward for teams.

“It didn’t really work that way. No disrespect to him because I think he is a great fighter and a good friend of mine, but by the time I had boxed my first tournament out in Finland, he had already competed at five different events.”

“So by the time I had had my first fight he was already on Podium.

“So it seemed, even though I was fit the whole way through and on weight, that I was getting brushed to the side.

“If say, I’d got in straight off the bat and got a loss with him getting a win, then fine, but there was never anything like that.

“After a couple of months he was on Podium so we weren’t even really sparring.”

When he was finally afforded the opportunity to shine, Edwards suspects he was being teed up for a fall as coming out of the opposite corner was the seasoned Kazak Olympian Birzhan Zhakypov.

Edwards turned the tables on both his opponent and the doubtful selectors by pulling off an against the odds victory, but it is one that came at a painful price and ultimately extinguished his already diminishing Olympic dream.

Not that he knew it at the time after being handed a telephone lifeline.

“When I went over to Finland I beat the three-time Olympian who had qualified for Rio and actually got to three quarter finals and lost to the gold medallist every single time.

“I was going in there as the massive underdog and GB was half expecting me to lose. It was the first fight of the whole tournament and I turned him over.

“After that though I completely snapped the ligament in my thumb and they pulled me out straight away, with Rob McCracken on the phone saying I had bigger fish to fry, which gave me a boost because it was only four weeks out from the first Olympic qualifier.

“I thought ‘wow’, I had just beaten someone of 33-year-old, who was number two in ABP, and it built me up so much in my head thinking I was number one because the wins anybody else had got at 49 kilos were not on that level for the previous couple of years.

“When I came back from Finland I went straight up to Harley Street to get my thumb x-rayed and it was a complete tear with the heal being six to eight weeks.

“I couldn’t make a fist for four weeks and couldn’t punch for a seven-week period. So with the injury I was out of the running and my name didn’t even get brought up in the meeting. Then Galal got picked over Harvey Horn, which was quite a shock because we thought he would get sent to the first qualifier and I think he was shocked by it.

“Galal then did the business and came back with the gold medal, so you can’t argue after that. I went from being up in the sky to being dropped straight away because I thought it was my chance gone and now it would be a four-year cycle.”

It was a cycle he had no intention of riding and, as far as Edwards was concerned, the wheels had come off his amateur ambitions.

Through his brother Charlie, he had witnessed at close quarters the professional circuit and he wanted a bit of that.

Also, the indifference he encountered when it came to defending his ABA title confirmed to him the time was right to shed the vest and try and make a living from the game that has been his life.

“A big thing as well was my brother,” he admitted. “I had been ringside at all his fights, sparring with him for camps and training with him all over.

“I was going over to a small hall in Finland to fight one of the best – I come back and nobody is arsed.

“For my second year in the senior ABAs I was told by GB not to enter because of my thumb as I only did one session with both hands.

“I didn’t think anyone would beat me, to be honest, because I am quite confident and headstrong. I went in and got a bye to the semi-finals, beat Louis Norman’s little brother – who Charlie beat for the English title – and then got a boy (Kiaran MacDonald) who was on the GB Development squad in the finals.

“It was a very nip and tuck fight and the first round I lost. The second and third I don’t think anyone thought I lost those rounds and on the judges’ scorecards I didn’t.

“The first round had him from all three judges, with the second and third being scored 2-1 to me. So with the way the rounds added up, I lost on a split.

“It absolutely took the wind out of my sails. It was disheartening, so I got out of the ring and went to speak with Grant (trainer, Smith) straight away and said I didn’t want to box amateur anymore.

“A lot of things tore my head up. I was entered by GB for those ABAs as No.1 seed and in every other year they had provided hotels and made it the best it can be, but this year I had to pay for my own hotel.

“Yet, when I got there, the whole coaching staff and physios were there – who weren’t even working on any boxers – all put up at the Jury Inn in rooms on their own.

“I was thinking that you’ve entered me and I’m boxing, paying for my own hotel down the road. For me something was off there.

“I loved the vibe of the boys on the squad and the whole feeling of GB, it was second to none. I don’t like putting them down because I really did enjoy my time there, but it is that whole thing of if your face fits.”

Next week: Sunny explains why he believes BoxNation and BT is the place to be, being signed by Frank Warren and his first encounter with the TV cameras.