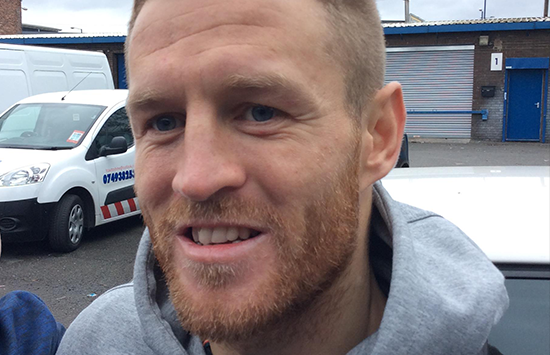 Terry Flanagan in no way intends for his WBO world championship belt to remain single. In fact, he is desperate for it to be married up but, up to now, the lightweight groom has been jilted at the altar a few times when he anticipated his big day being in the offing.

The 27-year-old has long coveted a date with Anthony Crolla – before the fellow Mancunian surrendered his bling to Jorge Linares – and former WBC champ Dejan Zlaticanin was also offered a night out in Manchester before parting with his prize to the rejuvenated Mikey Garcia. Linares himself chose to dance with Crolla last year rather than share the floor with an unbeaten world champion.

Flanagan craves a coming together where he will really have to charge up his Turbo and he believes that is what he has got when he headlines the blockbuster ‘New Era’ card at the Manchester Arena on April 8.

A fellow world champion won’t be emerging from the opposite corner this time around, but it will be an opponent who is as formidable and avoided as himself.

Ranked at No.1 by the WBA and No.2 by the WBO, taking on Petr Petrov is not at the top of everyone’s ‘To Do’ list. In the case of the Madrid-based Russian, the WB letters in the boxing alphabet could well stand for Wide Berth, because that is what the champions seem to give him.

Not Flanagan, he demanded to be paired with Petrov, mostly because a fear of losing brings out the brutal best in him.

Although his dream dates eluded him in 2016, the Turbo kept revving with three defences of the title he won in July 2015 against Jose Zepeda and maintained ownership of in spectacular style against Diego Magdaleno three months later.

Derry Mathews, Mzonke Fana and Orlando Cruz were accounted for last year as Flanagan set about banking world championship knowhow ahead of sterner tests to come.

“That was always the plan if we didn’t get the fights we wanted, to stay active, gain momentum and keep the ball rolling,” he explained during a pitstop from punching at the Finest Boxing Gym, just a few minutes drive from the Manchester Arena

“With the last three opponents, Derry is a British level fighter really, don’t get me wrong he is a good champion, but I made hard work of that fight. With the other two, Fana was awkward, but I didn’t box my best, although I was probably at my best in the gym at the time. I just didn’t perform on the night.”

Flanagan’s camp for the Fana fight was elongated due to him being originally scheduled to appear on the ultimately aborted Fury-Klitschko card and he was subsequently relocated to Cardiff.

‘I just ignore people who say ‘he is fighting nobody’ and some say Petrov is a nobody. If they knew anything about boxing they would know he is not, he is a great fighter who has been about at world level for a long time’

“It was a long, hard, brutal camp and I think it showed on the night. I didn’t peak right. The last one, Cruz, was a case of going in and doing a job on him to get him out of there. If I hadn’t of stopped him people would’ve said I should’ve got him out of there, but then they probably said I should’ve done it earlier. I still did my job, didn’t get hit and took him out.”

There is an almighty rush in this day and age for world champions to be catapulted into unifying titles and mixing with the elite the moment a title belt is wrapped around their waist. While Flanagan was, indeed, happy to gamble his belt for another right from the off, he can also see the bigger picture and accepts that making more routine defences has broadened his experience for when the time comes to go double or nothing.

“It’s done me good really but, the fact is, I wanted the big fights and have called for them. As soon as I got the world title I was looking to unify.

“And I am a firm believer in everything happens for a reason. I’ve won the title, got them defences under my belt and now it is time to push on and get these big fights.

“I just ignore people who say ‘he is fighting nobody’ and some say Petrov is a nobody. If they knew anything about boxing they would know he is not, he is a great fighter who has been about at world level for a long time.

“It is a tough fight, it is the hardest fight out there I could take at the minute with all the other champions tied up. I went to Frank Warren and said I needed a fight I could get up for and put a performance on in front of my fans.

“He put forward Petrov and we said yes.”

Navigating a route through the lightweight landscape should become a clearer path in the coming weeks, once Anthony Crolla and Jorge Linares have completed their repeat performance and it is determined whether the WBC champion Mikey Garcia will face the winner or seek more lucrative alternatives.

Whichever way it pans out, Flanagan insists he is ready and waiting to step into unification circles, or even test himself against a genuine pound-for-pound superstar.

“I’ve been convinced I’ve been ready since the start. I wouldn’t take a fight I didn’t think I could win and I have said I would fight anyone in the division – even Lomachenko if he is looking to step up. He is seen as the best out there so I believe I can hold my own with anyone at world level.

“I’ve said time and time again, the better the opponent, the better performance you will see from me.

“You have to be patient, everything does happen for a reason and maybe if I had got those fights a year ago I might not have won them. Now I’m a year older at 27 and in my prime, it is my time to shine now and show what I can do.

“I respect Carl Frampton for what he’s done. He’s at a good age now, in the prime of his career and wants to fight the best and prove himself. Even if he doesn’t win like against Santa Cruz, he is still remembered for being in great fights and that is what I want to be known for.”

Next time: Terry on why he will always be reluctant to talk the talk