By Richard Hubbard
‘He is my mentor, my dad, my uncle – he is everything’

IT IS NOT just football managers who like to play the market during the January transfer window.

While many of the touchline prowlers will be racing against the clock come last orders tonight at 11pm, in the boxing business promoter Frank Warren got his key January deal over the line early with the exciting signing of hot Manchester prospect Zelfa Barrett. 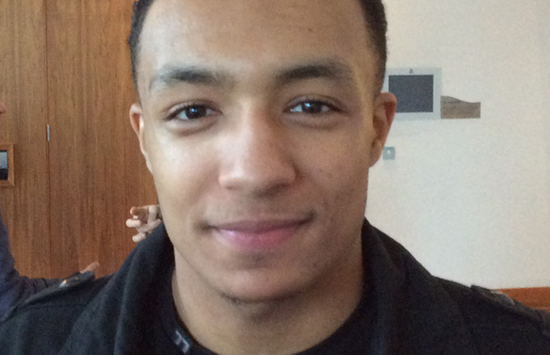 The ambitious super-featherweight, with an unblemished 7-0 tally on his card so far, can now expect to showcase his talents on the big shows, with his first outing under the Queensberry banner scheduled for the undercard of Terry Flanagan’s world title defence against Derry Mathews at Liverpool’s Echo Arena on March 12.

In keeping with the transfer window theme, the 22-year-old drifted into football-speak when offering his take on being the latest addition to Warren’s burgeoning stable.

“I’m over the moon – very happy!” said the elated nephew of former British and European welterweight champion Pat Barrett. “I’ve had seven fights, have been signed up quickly and I am so pleased to be signed by Frank Warren.

“I believe he is the man, he builds up fighters correctly. He doesn’t just throw them in, he builds them up and gets them the right fights.

“He used to promote my uncle, he promised him a world title fight and he got him one. He is a man of his word so I am very happy.”

Barrett is taking inspiration from those in the stable currently at the top of their profession – fellow Mancunian Terry Flanagan, as well as Liam Smith and Billy Joe Saunders, the latter two having had their careers steered by Warren from the off in the pro ranks.

“Of course and that is my goal from day one,” he stated on the standard bearers. “Becoming a British champion is an achievement, but I really want to be a world champion. It just inspires me so I believe he is the man at this moment in time to get me that.”

Not that Barrett believes he is quite ready to go full-time big-time just yet. Four of his seven fights so far have been staged at the Middleton Arena, a stone’s throw from his own doorstep, on shows promoted by his uncle.

In between profiling his punching prowess on BoxNation shows, Barrett is happy to also continue his education locally, working for the family business and clocking up the experience.

“It is my home ground and I love it,” he said of his local stomping ground. “An active fighter is a good fighter, constantly fighting, constantly training so your mind is always on it.

“It is a small venue that holds 500-600 and is just round the corner from my house. It is home and I’ve got a good following.

“I’ve got that little base now so people will come and watch me fight at the big venues too – they are all my friends now.”

Matchmaking, or rather matches staying made, has proved an issue for Barrett in his fledgling career, with two journeymen featuring twice on his ring record. Attempting to unpick the defences of the well-seasoned and wily weekly warriors is ugly work at the best of times, but Barrett had to do it twice against Kristian Laight – with 222 contests to his name – as well as journeyman in the making Jamie Quinn, who had 17 fights in 2015 alone.

“I was supposed to fight and my opponent pulled out. We were ringing around and I was due to fight in like an hour, so we rang the same kid (Quinn) and he was ready on weight, so he turned up again.

“It is the same with Kristian Laight, my opponent pulled out and Steve Wood was ringing around so I got him again.”

Such opponents are not in the business of making you look good, with Laight in particular having seen it all before from young hotshots, to the extent of grinning at the upstarts having just absorbed their best work.

“Listen, you should watch it, it was my sixth professional fight and Kristian Laight wasn’t laughing! I cut him, it was like he didn’t want to be there, he said to me that I didn’t stop him but I might as well have because he had to have 29 days out with his cut. I give it him, the goal was to knock him out and if it had been six rounds I would’ve done.

“It is harder because they are there to survive, make the money and get through,” added Barrett, who firmly believes he will come into his own when up against opponents who wish to engage and trade, pointing to his most recent as an example, which resulted in a second round stoppage.

“Of course, my last fight against Ismail Anwar, he was there to win, he wasn’t there to lose and be a journeyman. When he tried to fight back I got the KO because it was more about levels and I stepped up. I thought, ‘ok, he is trying to beat me here’ and then I put him away.

“Mentally it put me at the level I thought I was at.”

For matters of the mind and career guidance, Barrett leans heavily on uncle Pat, who hung up his gloves in 1994 with a record of 37-4-1 with 28 KOs.

“When he was British champion I wasn’t even thought of! He had a very short career and a good one, he’s told me the mistakes he made and what I need to do to get to the top.

“What more could I ask for? I’ve got the best trainer, who has actually been a champion. In that era it was an achievement not to be knocked out, that was the time when people got knocked out bad. I’m happy to have my uncle Pat as my trainer,” he added, revealing that the former boxer known as ‘Black Flash’ performs multiple roles on his behalf.

“I live with him too! He is my mentor, my dad, my uncle – he is everything. If I do something wrong in the gym he will take me home, sit me down and explain to me what I need to do, to make me mentally ready for the next day at training. He is my everything.”

The ‘Black Flash’ even tweaked his own stage name for his nephew, resulting in the creation of ‘Brown Flash’, but Flash jnr admits his ring moniker doesn’t quite have the same ring to it and prefers a shorter, snappier version.

“You know what, he called it me! I like that Flash, but he said I’m brown and I’m flash! I think I will swerve away from Brown Flash and go with Flash.

“There is only one Black Flash and I always tell him that.”

That won’t stop Barrett seeking to emulate and overtake the accomplishments of his uncle – and he is more than prepared to put in the hard yards to realise his ambitions. Not for nothing is he referred to often as the gym rat of the family firm.

“I want to be the best at my weight, to be the best, so it takes sacrifice. Becoming the best is not easy, it is hard and even when you think you have got something, there is always something else you need to work on.

Should be worth tuning in to BoxNation for the start of an era on March 12.