THE BIG LEAGUE BECKONS FOR OUR BIG MEN

OCCASIONALLY, FROM MY vantage point at ringside, I am in a position to capitalise on a break in the action and pass on something I have spotted to our fighters to hopefully help them along in some way. Other times I might give a gee-up to the corner team if a fight is a bit closer than they like to think.

Recent occasions when I have imparted a little nugget of wisdom – or so I like to believe – have worked out rather well. Sam Maxwell was in all sorts of bother in his last fight against Sabri Sediri when he was going for his first title in Leicester and I took the opportunity to suggest the Frenchman was open to a big overhand right hander. Bingo.

Employing the right and forcing a stoppage was also the voicemail sent in the direction of Brad Foster at Stevenage in May and that worked out well too against Ashley Lane.

It doesn’t always work out, but the point is that I am going to have to remind myself to keep it zipped on Saturday night at the o2 Arena when the main event comes around.

The big heavyweight showdowns are nearly upon us and I get the feeling that we are approaching the most highly-anticipated night of boxing of the year so far. The British heavyweight title collision between Daniel Dubois and Nathan Gorman has got people talking. It has also got people changing their minds over which way the fight will go.

Nobody, aside from the respective teams, seems to be nailing their colours to a particular mast or is even remotely confident in making a prediction.

That is what makes this fight so special, this and the fact that we have the two top young heavyweights in the world ready to do battle for a domestic title.

I really make no secret of the fact that I would have preferred to have parked this one for another six months or so, until public awareness of both fighters had increased and we could have done bigger business for the pair of them.

The fact is, when the Board mandated Nathan after the withdrawal of Joe Joyce from the process, neither man was prepared to step to one side in order to delay what always was an inevitable coming together.

So here we are and we have got a huge fight on our hands regardless and will probably be the case that this fight will parachute the winner into the mainstream and consciousness of the public.

Representing both fighters in a headline fight is nothing new to me, but it is a strange feeling all the same when the first bell rings and they go at it. I will have to sit on my hands and that is how it is.

It is very difficult but I have been down this road a lot of times over the years, like when we had Steve Collins fighting Nigel Benn or Naz against Steve Robinson. It has happened so many times for me.

At the end of the day, this is what boxing is all about. It is a business we are in, a professional one and these guys have got to do their bit.

As I said before, people are swinging back and forth with this one and we are not really getting any clues from the pre-fight rhetoric. They are two very different characters. One is very open and one is quite reserved, but the personality trait they will both bring into the ring is their determination and will to win.

That is what they have got in common.

Whatever the outcome on Saturday night we will be quick to remind the loser that we are heavily invested in both fighters. They are both with us and, I will say it again, a loss is NOT the end of the world.

Joe Joyce, meanwhile, is going full-steam ahead in his bid to gatecrash the elite heavyweight party. It really is quite something that he is going in with another seasoned campaigner and former world title challenger in Bryant Jennings in just his tenth fight as a professional. 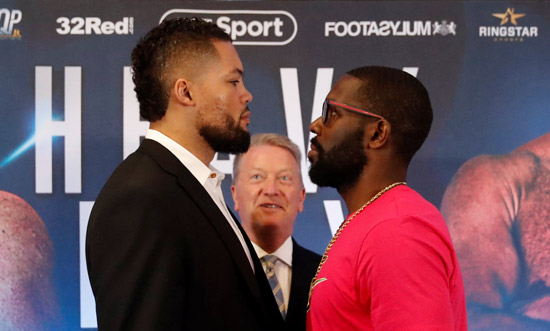 I know he has got the storied amateur background and Olympic experience, but you don’t see many others from a similar position moving so quickly.

This is a top fight for Joe and a very tough one. There are a good few people in boxing who believe Jennings is a step in the wrong direction for the Big Juggernaut.

My thinking is that there are very few heavyweights who would relish going in with Joe, given the relentless assault he carries out every time he steps into the ring.

It is not meant to be easy when you are closing in on world level and it will be a big statement from Joe if he can add the name of Jennings to his CV and do it in style.

Should he do this, Joe, and the winner out of Daniel and Nathan, will be ready and waiting to really hit the big league.