THE END FOR ENZO – A CREDIT TO THE SPORT

The curtain came down on a fine career at York Hall on Friday night when Enzo Maccarinelli dropped his guard against the heavy hitting Dmytro Kucher in a challenge for the EBU cruiserweight title. 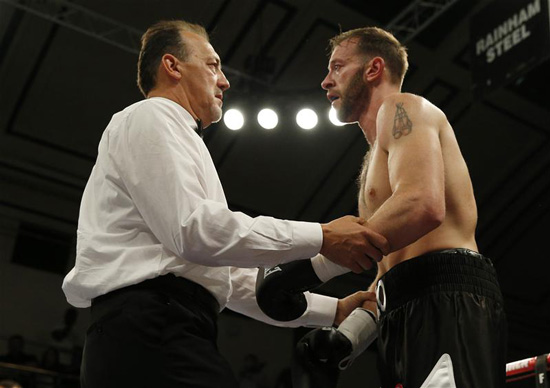 That he was still in the punching for titles at the age of 35 and after 49 fights tells you everything you need to know about the man. He is fearless, would take on all-comers and simply loves the sport to such an extent that, while he was prolonging his career under the astute tutelage of Gary Lockett in Cardiff, he was also training up young hopefuls at his own gym in Swansea.

He is a true gentleman of boxing, I am certain we have not seen the last of him and he absolutely has a future in the game. I think he is a very good commentator and analyst, he understands broadcasting and there will always be a role for him on BoxNation.

Enzo has been an absolute model professional in every respect and always spot on to deal with. He has won just about every title there is to win since claiming the now not recognised WBU cruiserweight crown back in 2003. Often he has had to do it the hard way, travelling to destinations like Saint Petersburg and Moscow to earn his stripes.

When he fought David Haye in a world title unification back in 2008 it was a memorable, but short, tear-up. There were mitigating circumstances behind the two round stoppage that emerged, as always, later, but Enzo was never one to bleat and the best man on the night won – no doubt about that.

His swansong on Friday against Kucher was never likely to be a drawn out affair either. It was one of those matches where he needed to be first to the punch – the first one to land flush was always going to claim the spoils and unfortunately for Enzo, Kucher was quick on the draw with that telling left hook.

It signposted the end of the road for one of boxing’s good guys, who revealed his decision to call it a day shortly after returning to the dressing room. It had to be his shout as many have unsuccessfully urged him to call it quits in the past.

I have, over the years I admit, suspected Enzo was taking on a fight too far, but he kept proving me wrong. He knows himself better than anyone, boxing is his life and I always worried that if I told him to stop he would have gone somewhere else.

Good luck for the future champ, we have all enjoyed the ride and we look forward to you landing a few verbal jabs on BoxNation very soon.

*********
The incredible short – professional, at least – story of Vasyl Lomachenko continued on BoxNation in the early hours of Sunday morning.

After Enzo was brutally felled by the Ukrainian Kucher on Friday, his countryman and yet another Beast from the East continued his remarkable rise in New York with a clubbing destruction of Roman Martinez in just his seventh professional contest.

It provided further evidence of the powershift in Boxing towards Europe.

You can talk all you like about Golovkin and my liking for Terence Crawford is well documented, but you have got to look at the facts. In Lomachenko’s seven fights he has won two world titles at two different weights, pretty much beating the best out there. His only defeat was in his second fight and that was by a split decision against Orlando Salido – an opponent Martinez has beaten and drawn with.

We know Lomachenko was an outstanding amateur and only lost one fight, but to flip over to the pro game with such ease and win a world title in his third fight tells you where he is at.

There is not a lot in it, but he must be the best world champion out there, he has gone in, stepped up and done the business – and then some. It is a big thing to do and I can’t think of too many fighters who have done that over the years.

Look at say, Leon Spinks, who was another formidable amateur. When he beat Muhammad Ali, you always fancied Ali in the rematch. This guy, I think he is the best around, something very special and, I’ll tell you what, it is going to take some fighter to beat him now.

Bob Arum recently said that Ali was the greatest of all time and now Lomachenko is the greatest of our time. We promoters say what we’ve got to say sometimes when it comes to propelling our fighters to the forefront, but he might just have a point.

Watching the way his slips shots, finds the angles he finds and makes people miss is memorising viewing for boxing watchers. I know Martinez and he is no mug, he has fought over here a couple of times and is a seasoned pro. I suppose Lomachenko’s amateur record of something like 396-1 allowed him to bypass learning fights to flesh out his record on the way up, but what he is doing is largely unprecedented and makes you wonder if an era of total domination is on the cards.