THE FEATHERWEIGHT PARTY HAS STARTED 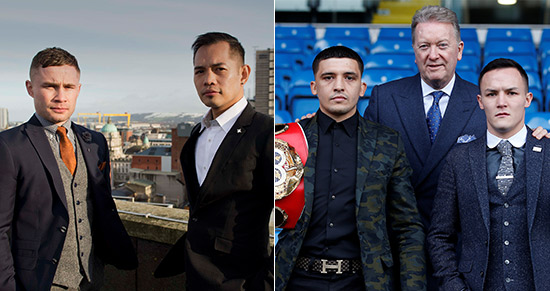 WHAT SHOULD PROVE to be a scintillating sequence of top-end featherweight fisticuffs got underway at the weekend when Oscar Valdez retained his WBO belt with a convincing points victory over Scott Quigg.

Next up, our boys join the party, with Carl Frampton taking on former four-weight world champion Nonito Donaire in Belfast on April 21 – which we hope will also become a final eliminator for the WBO title –  before Josh Warrington challenges Lee Selby for the IBF world title at Elland Road in Leeds on May 19.

Outside of this, Leo Santa Cruz and Abner Mares will rematch in June to unite the WBA straps and after that the winners can start meeting each other.

The odd man out in all this – at the moment at least – is Gary Russell jr, who hasn’t defended his WBC title since May of last year, having also only fought once in 2015.

I am aware that everyone assumes the winner out of Selby and Warrington is nailed on to travel to Belfast this summer to take on a hopefully triumphant Frampton after his date with Donaire but, I’ve got to be honest, we’ve got a completely open mind over everything.

All we do know for sure is that we want Carl to be fighting for a world title at Windsor Park, so we have options in this respect because a fight with any of the world champions would make for a fantastic occasion.

For his part, Carl just wants to fight the best and even picked tough opponents for his comeback fights, having previously been out of the ring for a while. He didn’t want any routine tune-ups and has jumped right back in at the deep end.

His dust-up with Donaire should make for compelling viewing and those at the nigh-on sold out SSE Arena are in for a real treat.

Valdez showed us his credentials in Carson in the early hours of Sunday and his clash with Quigg was a good fight for the fans, no doubt about that.

It is just a shame that Quigg came in overweight and fighters not hitting weight is something that irks me because it is happening more and more.

Being unprofessional, however, is not an accusation you could usually level at Quigg because he has always been very diligent with his preparations.

The fact he did come in over you have to take into consideration because it resulted in Valdez giving weight away.

I believe the Mexican has got all the makings of becoming an elite operator, although I would like to see him out a few more times before making a real judgement.

I’d like to see him up against a quality operator at his own weight so we can see him on a level playing field, although he showed what he is which is a tough, tough sod and he was up against a good opponent in Quigg, who is no slouch, and won it by wide margin in my book.

There are good fights to be made down the line with our guys when he recovers from the injuries he sustained against Quigg. 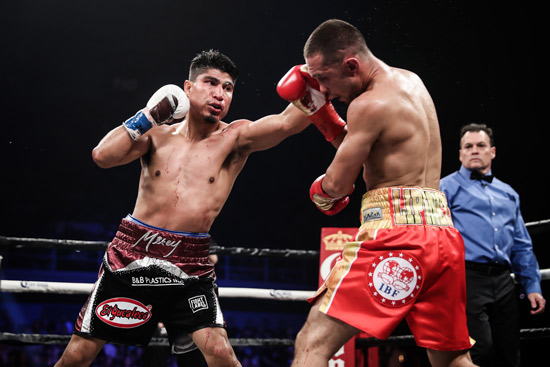 MIKEY GARCIA PUT his marker down in yet another weight division on Saturday night, winning a world title at a fourth different weight with his victory over Sergey Lipinets, live on BoxNation.

The 38-0 Garcia is one quality fighter and his accomplishments speaks for themselves, but there is a quiet man up in Manchester who would have absolutely no qualms at all over stepping in with the Californian ring wizard.

You know what, I’ve just got this hunch about our man Terry Flanagan and, when it comes to it, I firmly believe he is going to shock a lot of people.

It is not like he’s got a fantastic amateur record behind him or anything like that, but he has got that something in him that when the chips are down he digs deep.

We don’t yet know what Garcia will do next – although the suggestion is he will move back down in weight – but I spoke with Richard Schaefer, who promoted the Lipinets fight, at the weekend and Terry is among the names they are talking about.

Terry has got to beat Maurice Hooker first on April 14 at the 02 Arena and that is not something anyone is taking for granted but, if he beats him, there are some tasty British match-ups on the table and then he can get into these big, big fights, which is where he needs to be.

There is so much on the horizon for Terry and he will be very busy. He needs to do a job on Hooker, then we have got a stack of dates and we are ready to roll with him.