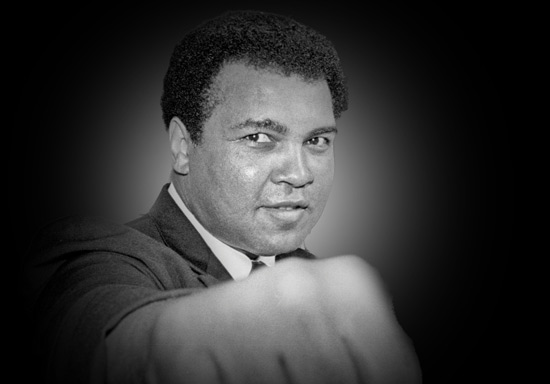 This is a terribly sad day for Ali’s family, boxing and for the world, one we prayed would never come but was always inevitable. It was the one fight even the Greatest could never win, but how he fought with characteristic courage and resilience until that final bell.

Now Muhammad Ali, the man who transfixed, then transformed boxing and in his own immortal words ‘shook up the world’, is gone.

You only needed to listen or look at the news this morning to see how the passing of Muhammad Ali at 74, dominated the global air waves.

It just shows what a fabulous man he was and what the world thought about him. The only thing I can equate it to is the death of Nelson Mandela and, of course, in so many ways they were two of a kind. Iconic campaigners who fought resolutely against prejudice for their beliefs and the basic rights of others.

These are the two people I have been most in awe of whenever I have met them. They have this charisma and aura about them and both fought for their rights – and during their lifetimes paid the price for their struggle.

Watching Ali – or Cassius Clay as he was initially – on television turned me on to boxing. He took my breath away. When I saw him fight Zora Folley in his final bout as a 27-year-old before he was dispatched into exile he was pugilistic perfection.

He was what boxing was all about- and then some. To say he was unique is an understatement, he was a one-off, mesmerising. Even when, not so much the world, but a great part of America disliked him because of his stand over Vietnam, he fought his corner with the same bravery he always displayed in the ring. In many ways that was his greatest attribute, his unbelievable courage. Those three-and-a-half years he was in exile probably cost the world some of the greatest exhibitions of boxing it would ever have seen.

Yet he came back after three and a half years, losing probably the best boxing years of his life at 27, to fight not handpicked opponents, like so many of today’s heavyweights, but two top ranked contenders in Jerry Quarry and Oscar Bonavena before embarking on the greatest trilogy of fights the game has ever known with Joe Frazier.

Coincidently, one of the things that changed the course of the Vietnam war was television – and it was TV that made Ali. In those days, not only was the heavyweight championship of the world the richest prize in sport, but Ali transcended even that, becoming the most recognised figure on the planet.

He once said famously: “Parachute me into High Street China and they’ll know immediately who I am”. He was self-educated, teaching himself to read and write and he had an intelligence that went beyond street-smart. Most important, he was always accessible to the public and the media.

He was a promoters’, fans’ and media person’s dream.

When you think of today’s so-called sports superstars, you wonder what planet they are on. The PR philosophy of Muhammad Ali should be entrenched every professional sporting curriculum.

He was to me the greatest heavyweight who ever lived, but whether he was the greatest boxer is a toss of a coin. Ali always said it was his own idol Sugar Ray Robinson.

What he did in the ring was phenomenal, not only were so many of his fights great and his performances ethereal, but unbelievably brutal.

Just take the Frazier fights, notably the Fight of a lifetime at Madison Square and the Thriller in Manila; these were the days of 15 rounders.

And as for the Rumble in the Jungle- many fights have spawned great literature but only one an entire book, Norman Mailer called it simply ‘The Fight’ and it has pride of place on my bookshelf.

Ali certainly transcended boxing but just how big would he be today in the era of modern pay-per-view? He wasn’t just a boxer, he was a freedom fighter, an entertainer and someone who always stood up for his beliefs.

His early conversion to Islam was, of course, deeply controversial, but let’s remember he was the first to put his head above the parapet and condemn Islamist extremists in no uncertain terms, insisting his religion was one of love, not hate.

Yes he was vulnerable as a fighter but his chin was among the most durable in boxing and when the legs started to go he developed the rope-a-dope. He could be knocked down but he always stood up to be counted. What a man.

It was his heart and determination which got him through, not only the vicissitudes of life outside the ring, his battles in it until finally debilitated by Parkinson’s Syndrome he lost the one fight that in the end we all knew he could never win.

He was instrumental in changing the way people watched boxing and in giving athletes a voice.

When he was voted the sports personality of the century on the BBC, he won it as an American – getting more votes than all the other contenders combined – beating all the icons of British sport.

He deserves his place in history, not just as a boxer, sportsman and activist, but as a human being.

I often wonder what he might have become had he not been hit by the most devastating punch of all, Parkinson’s. An ambassador not just for sport but for his country and world peace?

Like Manny Pacquiao and Vitali Klitchsko could he have punched his way into politics? Can you imagine him delivering those devastating verbal ko’s to Donald Trump right now?

Like Sonny Liston and so many others, Trump would never know what hit him.

During a career in which we applauded his sublime skills, cheered his fight for humanity and laughed at his famous doggerel, Ali spilled millions of words. But the truest constituted a mere half dozen.

In Hubbard’s Cupboard tomorrow: My lifetime’s journey with the greatest of them all.