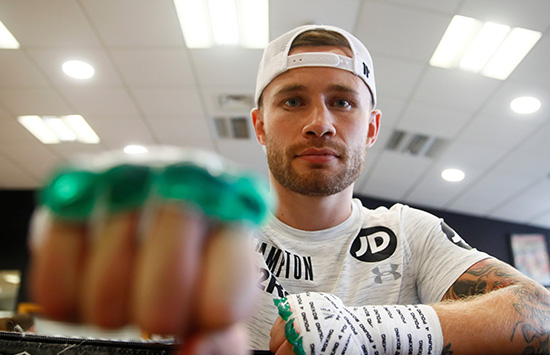 WHO IS THE HAPPIEST bunny in boxing? Step forward Carl Frampton, who had this to say after his defeat of Nonito Donaire last April. ”I have never been as happy as a boxer as I am right now.”

The Belfast featherweight’s working arrangement with Hall of Fame promoter Frank Warren obviously is a healthy and fruitful one which is putting bums on seats and smiles on faces – especially Frampton’s.

The result is expected to be a huge crowd at Windsor Park on 18 August when Frampton says he anticipates a top quality performance both from himself and opponent Luke Jackson in a BT-televised scrap ,although Frampton reckons he is “a level above” the unbeaten Aussie from Tasmania.

Frampton, 31, fulfils a long-held ambition when he fights at the home of Northern Ireland football.

“If he performs to his best and I perform to my best, I’m knocking him out, simple as that,” he says.”I’m due a knockout – I haven’t knocked anyone out in quite a while.

“I can handle the pressure and I feel a big performance coming on. First and foremost I’ll concentrate on the performance and get the win but I have a good feeling about this one.”

Which is good news for his massive army of fans. The always articulate Ulsterman -one of most expressive exponents in and out of the ring – is immensely popular among genuine fight fans .

A sell-out crowd of 24,000 is set to roar on the former two-weight world champion against ‘Tasmanian Devil’ Jackson, who has won all of his 16 fights since turning professional in 2013.

“He sees that he’s the complete underdog and there’s no pressure on him – people are writing him off,” adds the smiling Jackal.

“That can help fighters – when they have no expectation on their shoulders – they can go and perform out of their skin.

“I’m certainly not taking Luke Jackson for granted in the slightest. I’ve done that before against Alejandro Gonzalez and I ended up on my backside twice in the first round. I’ve learned from that fight. “But I’m the better fighter and I feel fit and sharp – I’m where I need to be at this point. I’m kind of holding it back a wee bit as I don’t want to peak too soon.

“I believe I’m one of the best supported fighters on the planet and that’s down to the passionate Northern Ireland sports fans.

“Obviously with the bill including the likes of Tyson Fury, Paddy Barnes,  Steven Ward and Lewis Crocker there’s a lot of quality on show and we’ve all combined to help sell it out.” 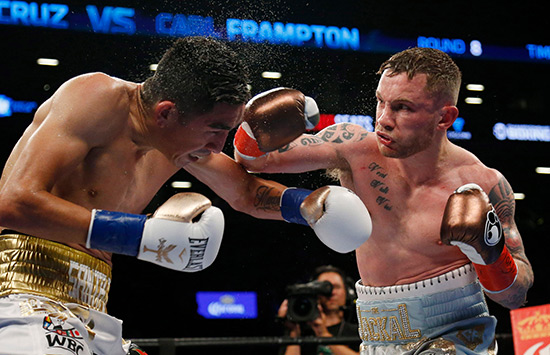 Now he insists: “I want to be world champion again. If I lose this fight my career is over, that’s the truth, but I’m not intending to lose it. Victory over Jackson sets up a potentially sizzling showdown with another fighter who has a massive fan base, Josh Warrington, the new IBF featherweight champion from Leeds. Lips are already being licked in anticipation of that one.

BOXING HAS RUMBLED in the Jungle, thrilled us in Manila and only last weekend knocked ‘em cold in Kissimmee from close to Disneyland in Florida BoxNation viewers were lucky enough to witness arguably the fight – and upset – of the year when Japan’s relentless Masayuki Ito lifted to WBO super-featherweight title against Puerto Rica’s hot favourite Christopher Diaz.

Big fights have certainly washed up in some weird and wonderful places – back in 1889 heavyweights James J Corbett and Joe Choynski even fought a bare knuckle contest aboard a barge moored in California’s Benicia Harbour close to San Francisco.

But surely the oddest sock spot of all must be the Red Sea city of Jeddah, in Saudi Arabia. where on September 28 two Brits, George Groves and Callum Smith, will slug it of out for a world super-middleweight title.

Londoner Groves and Liverpudlian Smith meet in the super-middleweight final of the World Boxing Super Series with Saint George’s WBA title and the Muhammad Al trophy also on the line.

This Liverpool v London battle would sell out any UK arena, yet Londom-based German promoter Kalle Sauerland has done a mega-money deal stage it it in Saudi Arabia, which has never had pro boxing before and where the principal sport is camel racing.

It is a baffling move. For my sins, I have been to Jeddah, and Las Vegas it isn’t.

It is certainly no boxing Mecca – though Mecca itself is just down the road.

Groves and Smith will meet in the King Abdullah Sports Stadium and there certainly won’t be any round card girls. Unless they wear a burqua..

Indeed, it is only this year that women have been permitted to watch sport in feudal Saudi.

And should Groves take his missus along as usual she will have to sit in a specially segregated women-only area and cover everything except her face.

It will be something of a culture shock too, for Smith’s ever-thirsty Scouse army of supporters should they wish to make the 3,000 mile journey. For one thing they won’t be able tlo get a beer – alcohol is strictly taboo. And if they do manage to smuggle in a can or two and are caught they face a public whipping.

Give a whole new meaning to going on the lash.