‘THE MAVERICK’ TEAMS UP WITH QUEENSBERRY 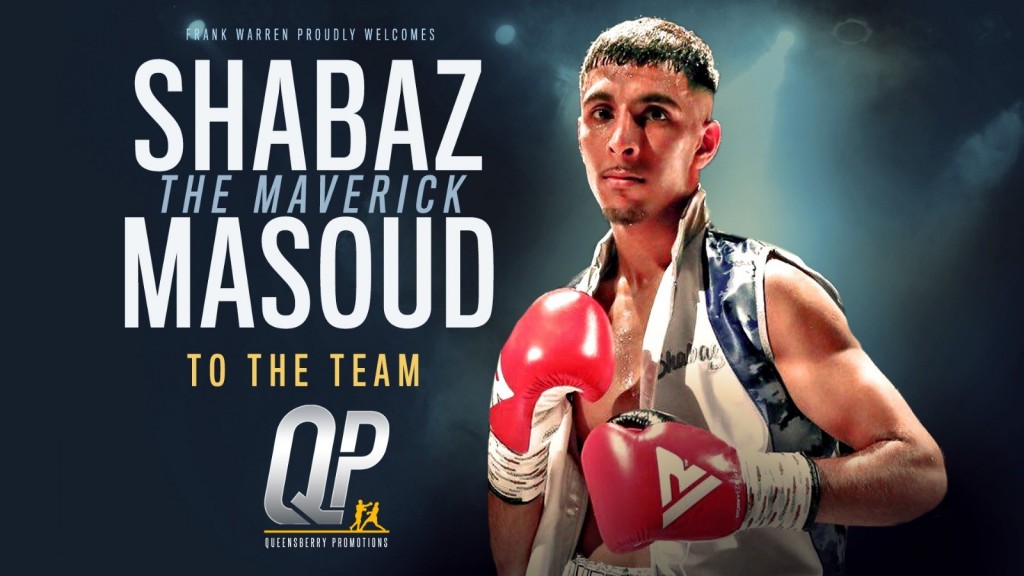 FRANK WARREN has added to his ranks with the signing of 5-0 super bantamweight Shabaz Masoud to fight under the Queensberry Promotions banner.

Masoud, from Stoke-on-Trent, made his professional debut in May 2018 with a stoppage victory and has since notched up a further four points wins, with three coming over four rounds and one six-rounder in his last fight over Brayan Mairena at Villa Park in Birmingham.

Aside from shining in his learning fights, the 23-year-old is capturing the attention of both opponents and onlookers during sparring encounters up and down the country, with many tipping him for stardom, which is something ‘The Maverick’ believes is his destiny.

“You know what, I’m just buzzing to be signed by Frank because I know he is the world’s best promoter right now, I personally believe,” reacted Masoud to the career development. “The way he builds fighters, I know he will build me into a big champion.

“Prince wouldn’t have been where he was if it wasn’t for Frank. I’ve been to the office and I’ve seen the statue of him. I asked if he was actually that tall and they said he was!,”  he added, before reflecting on the recent growth of his own profile.

“Day by day it is just getting better and better. Every day I spar with top lads and today I’ve been sparring with Sam Bowen and Brad Daws, who are bigger than me because I am only a super bantam.

“But if you work to the right game plan and make people miss, it is frustrating for them.

“Any super bantam in the country can get it from me. I call myself Maverick because I am different and I don’t think I’ve got one style. I mix it up and whatever needs to be done for the win gets done. No one has seen me scrap yet and I know there will be times in fights where I’ll have to – and I have got it in me.

“I break people down and, people might question my power, but if I didn’t have it then I would be walked down. People tuck up in their shell and I want someone to come at me. When they do it will be lights out.

“The whole point of being with Frank is I know he will get me the best exposure possible. All I need is a bit of exposure and I will go from strength to strength.”

Hall of Fame promoter Frank Warren sees the potential in his new signing.

“You know you are onto something with a young fighter when so many people tell you to take a look. Shabaz possesses enormous talent and is an entertainer who people will enjoy following the progress of.

“We already have so many fine young fighters on our books who are making great strides in the game and I fully expect Shabaz to follow suit. I am very much looking forward to working with him and helping him to realise his ambitions in the sport.

“It will certainly be an exciting journey.”

You can follow Shabaz Masoud’s journey on his social media accounts.