Some boxing promoters will tell you that, like love, the best matches are made in heaven but it is more likely to be over the phone, a meal or a chance encounter.

For me, the best matches are always made in the mind, usually when I am having trouble nodding off at night and I lie back and think of great fights I would love to have witnessed if only they could have been put together had they not been separated by eras.

Actually such mouth-watering pairings would hardly send you to sleep – they’d keep you wide awake!

However the fight of my dreams at the moment features two monster middleweights – Gennady Golovkin and Carlos Monzon. 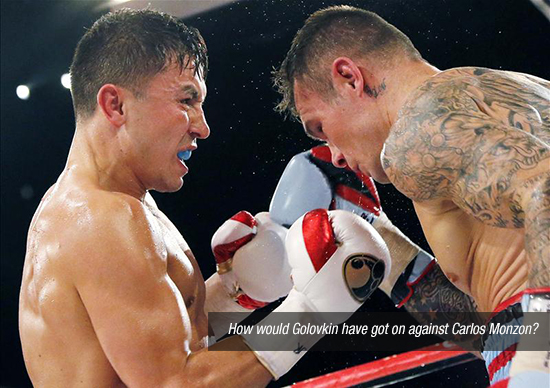 Like so many others, I am a committed fan of the chillingly destructive Kazakh who is now the dominant force in world boxing. Pitting him against the equally ruthless but more skilfully calculating Argentinian –even in the imagination – brings shivers of anticipation. If only…

But there is more to it than that. For boxing’s history is littered with tragedies, far more outside the ropes than inside them, from the still unexplained suspicious deaths of Freddie Mills, Sonny Liston and Arturo Gatti, the murders, by shooting, stabbing or bludgeoning of Stanley Ketchel, Battlling Siki, Jackie Paterson, Oscar Bonavena, Vernon Forrest and Alexis Arguello, through to the suicides of Randolph Turpin and latterly Darren Sutherland.

But there can be no doubt that the most tragic episode in sport was that featuring the man who was to prove even more of a monster out of the ring than he was inside it.

Unquestionably Carlos Monzon is the finest fighter ever produced in Argentina and one of the greatest middleweights of all time, arguably   second only to Sugar Ray Robinson with Marvin Hagler and now Golovkin right up there in the mix of the mighty.

Monzon also is one of boxing’s most shocking stories: A kid from the slums of Santa Fe who became the toast of the boxing world only to end up in prison for murder and then dead as the result of a car accident.

But 45 years after his greatest triumph – the day he stopped Italian idol Nino Benvenuti to win the title on November 7, 1970 – his legend lives on.

In Argentina Monzon remains bracketed with Diego Maradona and Formula 1 legend Juan Manuel Fangio as a national icon, despite the frighteningly darker side of his persona.

Angelo Dundee described him as “the complete fighter.” Yet he fought only once in America, otherwise plying his trade in South America and Europe.

At a tad under six feet he was tall for a middleweight, and his style could be prosaic at times. But boy, could he punch with a right hand which bored holes in his opponents’ guards after his usual a couple of exploratory rounds. He never stopped anyone in the first.

Monzon was a master at controlling the ring with either his piercing right hand or darting left jab.

In one eight-year stretch, he was unbeaten in 60 bouts, defeating the best available opposition and for seven years was the undisputed world middleweight champion. He avenged every one of his early three losses, and retired as champion after 101 fights (winning 58 by ko) while on an 82-bout unbeaten streak that spanned 12 years.

When he acquired the title in Rome he methodically wore Benvenuti down and knocked him out with a crushing right in the 12th round. The Italian demanded a rematch but was summarily dispatched in three rounds in the return in Monte Carlo.

While he had none of the pizzazz of either of the Sugar Rays, Robinson and Leonard, or the fan-friendly appeal of Golovkin, the latter-day smiling assassin, he was as formidable a piece of fighting machinery: cool under pressure, expressionless and cunning with his delivery of punches that were fired straight and true as they efficiently dismantled the opposition.

His title-winning performance against Benvenuti was voted Fight of the Year for 1970 by Ring Magazine.

But outside the ring he led a disturbingly violent life. For the last five years of his career Monzon fought with a bullet lodged in his left shoulder blade, the result of being shot twice during an argument with a former spouse.

He was known to be physically abusive to women and had spent some time in jail after a brawl and for possessing a gun.

Yet for that latter part of his career he was most famous and feted man in Argentina, though mainly resident in France where he was the toast of Parisian nightclubs.

On Christmas and other special occasions, he returned to Argentina to fill up a truck with toys to distribute to children of the village where he was born.

He ended his career with two close decisions over Colombian Rodrigo Valdez. A month after beating Valdez in Monte Carlo for the second time, a bout in which he was briefly knocked off his feet for the first time in his career, Monzon announced his retirement in August 1977. He said: “After the bout I looked in the mirror and said to myself ‘Monzon was never floored before. Monzon is a great champion. He must always be remembered as a great champion.’ So I quit.”

Alas, his life took its darkest twist in 1988 when, at 46, he was convicted of strangling his estranged second wife Alicia Muniz into unconsciousness in a jealous rage and then throwing her off a balcony to her death from a second-story apartment in the beach resort of Mar del Plata.

Monzon ‘s arrested and trial set off a media frenzy that had Argentina riveted to a similar degree as that of O J Simpson in America six years later.

He maintained his innocence but an autopsy indicated that Muniz had been strangled before she went over the balcony. He was convicted of murder and sentenced to 11 years in prison.

Six years later, Monzon, too, was dead, at 52. He had been given a weekend’s leave from jail for good behaviour and was returning to Las Flores jail by car on the evening of January 8, 1995 when he lost control of the vehicle. It rolled several times and Monzon and a fellow passenger died instantly.

So ended the troubled life of a great middleweight champion who had magic in his fists, but murder in his heart.