It was exactly 20 years ago this week that the nation was celebrating one of the most popular victories in the history of British boxing.

Dear old Frank was by then firmly established as Britain’s fighting son, despite falling short in three previous world title shots and giving us palpitations whenever he got hit on the whiskers.

The chant of ‘Broo-no, Broo-no’ reverberated throughout the 30,000 crowd on that chilly night as his arm was raised and I doubt a British sporting figure was ever more loved than he was on at that memorable moment.

Subsequently there was an open-top bus tour and from the way the cheering crowds lined the London streets you could see just how popular he was. It was almost as if England had won the World Cup again!

There is a chance to re-live Bruno’s triumph and the story behind it on Monday 14th September at 7pm in the new BoxNation series “A Fight To Remember”, the first of which, the epic battle between Nigel Benn and Gerald McClellan, also in 1995, and one forever embedded in our memories, was exceptionally well-received. 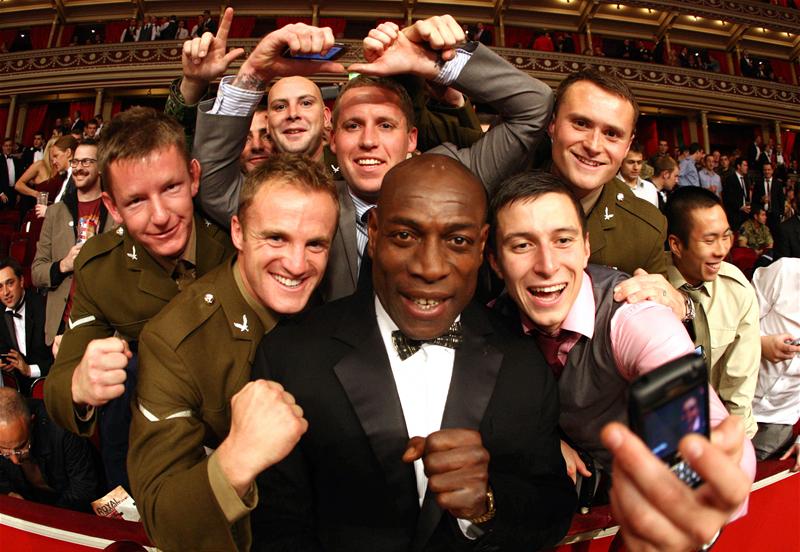 Nothing stirs the emotions more than a fascinating slice of nostalgia, and this enthralling series has it in abundance.

This time presenter Alex Steedman and I will be joined in the BoxNation studio the by two veteran boxing scribes, Colin Hart and Alan Hubbard, who between them have covered more word title fights than Vegas has casinos.

I am looking forward to recalling some of the great moments of that occasion and a enjoying a lively debate on what made Bruno such a national icon.

I’ve always thought that Frank had the Granny-factor – the old ladies love him, and still do. In fact everyone seems to. The thing him was that he was quite uncomplicated as a personality – what you saw was what you got.

The fans became attached to him, not so much because of his boxing ability, but because of  ‘Heh, heh, heh’ and ‘Know what I mean Harry’  They loved those exchanges with the late Harry Carpenter and guffawed with him when he cheekily mentioned his ‘Black and Decker,’- all that sort of Bruno-esque banter.

This fight was one I had to work hard to persuade McCall’s promoter, my then partner, Don King, to take. Initially they weren’t interested at all, but I saw the opportunity for our man.

I had studied McCall when I set up a training camp for him in Hertfordshire before he fought Lennox Lewis, and I always fancied Bruno might beat him.

Eventually I got King to agree and we met to sort out the terms at the Dorchester Hotel. The deal was that the winner would have to face Mike Tyson, who I believe had been released from prison around that time.

Frank’s then wife Laura had also been involved in negotiations and she was always very difficult to deal with – to be honest she could be a pain — but King told Frank ‘this is what the deal is, take it or leave it’. Thankfully he took it and he got very well paid.

I’ve always believed Bruno was actually a better fighter than he was given credit for. In fact, before Lennox Lewis clipped him, I thought he was ahead in the fight.

After McCall beat Lewis – a real turn-up – his next fight was against Larry Holmes and we went out to Vegas to watch it.

I said to Frank ‘‘watch how Holmes uses that jab because that’s the way to beat McCall, straight shots.’  I also noticed that McCall was sometimes distracted during fights and part of my game plan was to get some of the fighters I was involved with at the time, including Nigel Benn and Naseem Hamed, to stand around the ring loudly cheering on Frank and Nigel did a great job.

It worked as they managed to grab McCall’s attention. Frank really couldn’t fight inside so his trainer George Francis worked with big Frank to get him to claim McCall as often as he could.  Particularly in the later rounds when we knew Frank had previous, and could run into trouble.

We were all on the edge of our seats, willing him on, but we knew that with Frank all it needed was one punch and it could be goodnight nurse.

Quite a lot went on behind the scenes, too, which I will be revealing in the programme.

During the build-up to the fight I had said to Frank, ‘if you win this I’ll buy you a new Bentley’. He said ‘Really?’

‘Yes,’ I said. “That’s a promise.’ When the result was announced, we all jumped into the ring and the first thing Frank said to me was ‘I’m going to get my Bentley, aren’t I?’ He didn’t seem bothered about the title – just the Bentley!

A few days later I kept my word and took him round to a showroom and told him to pick one he fancied. He chose a pink one and I thought to myself ‘whatever’ – but that was Frank, wasn’t it?

I think he also had a suit to match!

It was Frank’s fourth attempt to win the title, which subsequently he lost to Tyson in his final fight. To be fair to Frank, what he sometimes lacked in natural ability, he made up for in determination, professionalism and certainly preparation. He was head and shoulders above everyone in that respect.

Rather poignantly, both he and McCall ended up having psychiatric treatment through problems brought on outside the ring, rather than in it. A lot of it was due in both cases to the use of social drugs, as Frank has admitted.

Frank also seemed to fall out easily with some people, notably the man who first discovered and nurtured him, his former manager Terry Lawless. He also always seemed deeply suspicious of everybody and this could become a bit tedious. But for all that, he remains, arguably, the best-loved figure in British boxing.

I even include Henry Cooper whose his affinity was largely with his supporters in London, whereas that ‘Broo-no, Broo-no’ chant can be heard to this day wherever Frank turns up – even in Scotland! 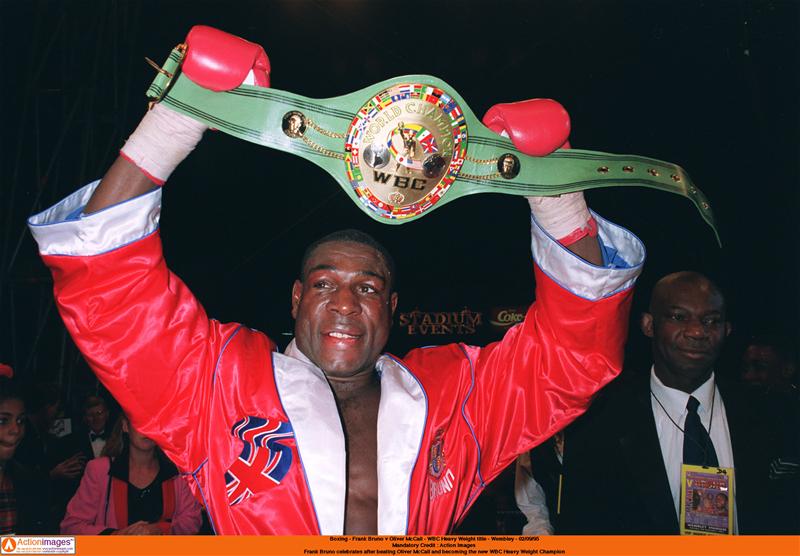 On with the show!

They say lightning doesn’t strike in the same place twice- but I don’t believe it after being hit with a thunderbolt for the second time in a few weeks and now having to again postpone the WBO Middleweight title fight between Andy Lee and Billy Joe Saunders which had been re-scheduled for Manchester on October 10th.

A cut eye caused by a sparmate’s stray elbow now rules out a gutted Billy Joe for this date after the original postponement and switch from Limerick, when Lee went down with a virus.

It is no joking matter – though I could be forgiven for thinking there might be a gypsy’s curse on this much-anticipated scrap between the two Travellers.

However it will definitely go ahead as soon as the injury has healed sufficiently for Billy Joe to resume full training.

The surgeon who examined the wound said it would not be advisable to do any sparring for a while. So Billy Joe has to keep himself fit and in condition for a fresh date.

Such is life in the boxing business. It’s a pain the backside but you tend to get philosophical about such setbacks.

I feel or both boxers, particularly Billy-Joe, because this really is the unkindest cut of all after the original postponement.

Cut eyes in sparring are rare, but they do happen, despite the use of headguards.  Probably the most notable occurred when George Foreman’s ‘Rumble in the Jungle’ with Muhammad Ali had to be delayed for six weeks. And David Haye also suffered a similar injury when his proposed fight with Tyson Fury was shelved on the first of two occasions.

As I say, these things happen and you just have to live with them, but I have to admit it’s been a bit of a wretched year in terms of postponements, with Frank Buglioni’s bout against Fedor Chudinov having to be put back until September 26th because the Russian broke his nose – also in sparring. Sometimes you wish they’d stick to shadow boxing!

However the important thing is, the Manchester Arena show goes on – and it is still a massive one with two scintillating world title fights.

Local hero Terry Flanagan faces a highly dangerous first WBO Lightweight title defence against tough hombre Diego Magdaleno, the number one contender, and Liverpool’s Liam Smith has the biggest test of his fast-rising career for the WBO Light-Middleweight title against American artist-on-canvas John Thompson, the fighter with the paintbrush left.

The cracking bill is packed with more title fights featuring some of the best up-and-coming home-grown talent, including Jack Catterall, Luke Blackledge and new signing Jimmy Kelly, plus what should be a corker between Tom Stalker and Craig Evans for the vacant WBO European lightweight championship. And we are working on another title fight to replace Lee v Saunders. 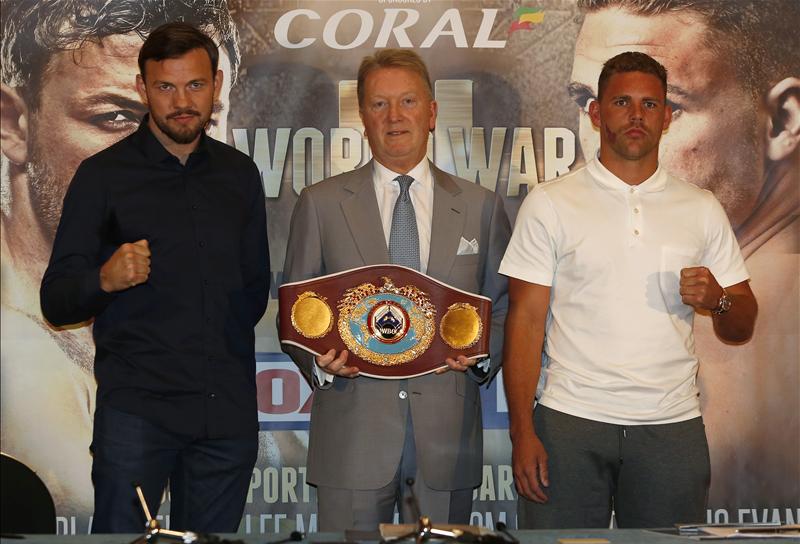 Strictly out of order

Peter Fincham. ITV’s head honcho, has a beef. He complains it is unfair for the BBC to pitch the new series of Strictly against ITV’s X-Factor on Saturday nights, claiming it’s not good for viewers to have to choose between them.

Really Mr Fincham? You didn’t seem to have a problem when progamming ITV’s recent boxing telecasts against BoxNation or Sky.

Why does the phrase double standards spring to mind?

He’s got a way to go yet before he catches up with 10-time world champion and modern day great Oscar, but the 21-year-old is believed to be every bit as exciting as his relative.

Watch tonight from 3am. 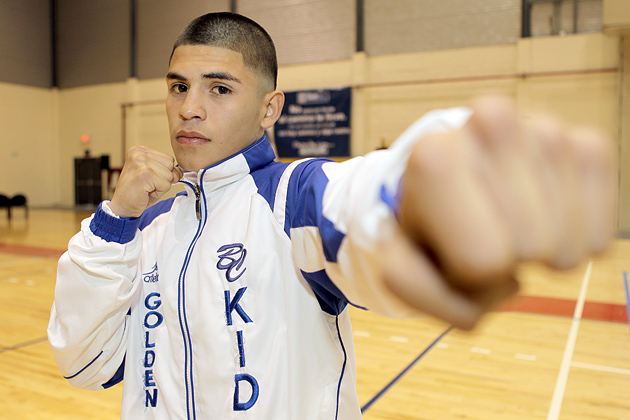