THE NUISANCE LOOKS TO EMULATE THE NOTORIOUS

Dublin born Jamie ‘The Nuisance’ Kavanagh, childhood friend of UFC sensation Conor McGregor, can’t wait to fight in front of his hometown crowd again when he returns to the National Stadium on Saturday 6th February. 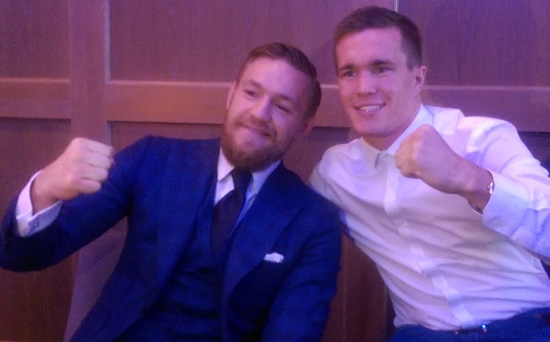 Red hot Kavanagh, who racked up over 180 wins in his amateur career, walked into Dublin’s Crumlin Boxing Gym at the tender age of 10 and never looked back. It was here that the 25 year-old first trained and sparred alongside Irish megastar Conor ‘The Notorious’ McGregor.

“His fighting skill is brilliant but I think his mind set in what he does both inside and outside the octagon is inspirational,” said Kavanagh.

“The way he dominates his opponents mentally and physically is something that I look up to and I’ll be looking to implement that into my game. Half of the time he has his opponents beaten before they’ve even had the weigh-in.”

Thousands of Irish fans flocked to Las Vegas to witness McGregor dispose of Jose Aldo in just 14 seconds and Kavanagh is hoping he’ll receive similar support on his return to Dublin. After five years learning his craft as a pro in the gyms of the US west coast, the former world youth silver medallist is looking to make a name for himself in Dublin.

He said: “There’s no better bunch to be fighting in front of. I can’t wait to get back over there, the reception I received last time was out of this world. It’s my hometown so that’s where I want to base myself, If I’m going to build a following anywhere Dublin is where it’s going to be.”

“Conor is probably the biggest fighter in the world right now, the Irish people have really taken to him and the support he receives is incredible. Having a crowd get behind you can make a hell of a difference so I’m hoping there’s going to be another big turnout for my fight.”

Kavanagh aims to kick off his 2016 campaign with another explosive win when he fights over six rounds in an international lightweight contest against an opponent to be announced and the Irishman is excited for the year ahead.

He added: “I’m feeling in top condition ahead of my next fight, I’ve been working a bit with Mark Tibbs recently focusing on my groundwork. 2016 is all about progressing and launching myself on to that next level.