THE OLD CARL FRAMPTON IS BACK 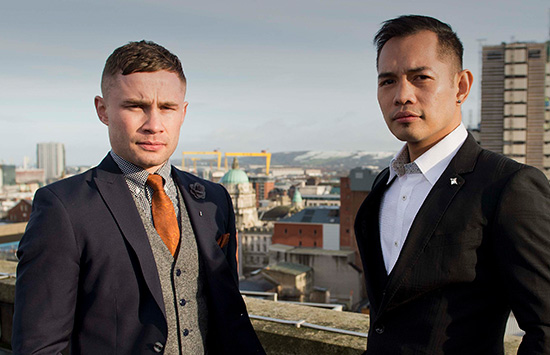 When the potential blockbuster between Carl Frampton and Nonito Donaire was booked in for Belfast on April 21, it represented a second full training camp for the local hero and his recently appointed training guru Jamie Moore. In his second Fighter Diary entry, Carl explains that this preparation period has been as much about the team as the individual and the group have rekindled the boxing fire inside him…

IT WAS A case of myself and my trainer Jamie Moore getting used to each other in my last fight against Horacio Garcia and I think we gelled pretty well right from the start.

Now we have been around each other more and have a greater understanding. There is also all the other lads and I feel like we are a real close-knit family, with no di*ckheads around and all good people.

I like the company I am in and I am enjoying it. I always talked about retiring and looking forward to the day I would hang my gloves up. I am genuinely enjoying boxing now and loving the environment I am in.

I want to go on for as long as I can while I am feeling like this. I am probably 31 going on 18 and I feel rejuvenated, I really do. I’ve taken a few new approaches with training and tried a few different things. We’ve been training at altitude and we’ve also linked up with the Manchester Institute of Health and Performance.

We’ve got a close relationship with Manchester City too and I’ve teamed up with a strength and conditioning coach from the football club as well – and a new nutritionist.

I am having a more professional approach than I have ever had before.

Jamie’s stable now includes a good few thoroughbreds and it is strange because he has said himself that after Tommy Coyle finished he would probably pack it in himself.

Then I got in touch before Martin Murray and Rocky Fielding teamed up due to Oliver Harrison’s illness, Conrad Cummings followed me, big Steven Ward’s here – now Jack Catterall as well.

So from being on the brink of thinking he would pack it in to this – and it is all down to my dad as well!

Obviously Martin and Rocky were going to make the move to Jamie anyway but, for me personally, it was down to my dad. I never really thought of Jamie, if I’m being honest, but I remember speaking to my dad on the phone and he said ‘what about Jamie Moore?’, because he is very knowledgeable, speaks well on TV and his instructions are very clear and precise in the corner.

He was the first one I tried and well gelled instantly.

You will see the changes we have been working on in my next fight against Nonito Donaire, who is a top opponent and he can punch – which they always say is the last thing to leave a fighter. He is also a good counter-puncher, so I brought in brilliant sparring.

The American we drafted in – Stephen Fulton – replicated Donaire and it would’ve been hard to find anyone more similar than we found in this guy.

I think you are just going to see a big performance from me. I don’t want to give too much away, but I feel with the way I have been performing in the gym the old Carl Frampton is going to be back.

It was important to me to be going in against a distinguished opponent. I had the comeback fight against Garcia and it proved a tough one because of the year I’d had, but from here on in for the rest of my career it needs to be big name opponents.

Donaire certainly falls into that category and is a well known name worldwide. After this I want more of the big names.

Donaire will let me know where I am at, for sure. That is one of the main reasons why, when his name was suggested, I rubbed my hands over the prospect of taking him on.

I think there is no better preparation than fighting and defeating someone as good as Nonito Donaire.

He comes across as a top character and I spoke to him at the press conference and he is a good guy. He is a nice family man, he had his wife with him and he talks about his kids a lot as well.

We are similar enough types of character, but I do not doubt for a second that if he gets the chance to take my head off, he will do it.

So all the nicey-nicey stuff will be put on hold until after the fight now.