THERE IS GOING TO BE HISTORY MADE 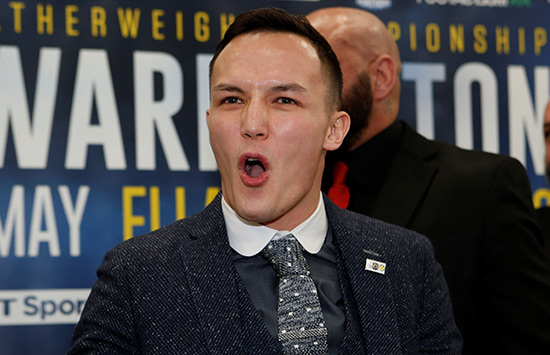 The clock is ticking towards Josh Warrington‘s night of destiny at Elland Road when he takes on Lee Selby for the IBF world featherweight title in a bid to become Leeds’ first world champion. Here, in his latest Fighter Diary, Josh updates us on his thinking as the moment he has been waiting for looms…

WHATEVER LEE SELBY says about what he might have experienced before or not, there is no escaping the fact that he is walking into the great unknown when he steps out at Elland Road next Saturday.

You just can’t prepare for an atmosphere like there will be on the night, no matter where you have fought before. I know he says he has boxed in Belfast, but it wasn’t in front of tens of thousands.

My crowd – I know a lot of them personally – have got an attachment to me and they feel like there is a connection because they see their pal boxing in there, someone they really know.

They want me to win like it is a member of the family in there fighting and they are going to make it hostile. Leeds fans are notorious for making a lot of noise and making it a bit intimidating.

Listen, he might not get fazed by it, but I know it certainly helps me and I have boxed in front of big crowds many, many times before and I know how it can play in my favour.

I HAVE NOTICED that the prospects of me winning are being written off by the so called experts and pundits when the subject of my world title challenge is raised.

It is actually not just people outside of Leeds because some people here don’t rate my chances and it doesn’t surprise me to be honest.

We are lucky it is a two horse race and I am unbeaten for a reason. I have never really looked like I am going to be beat and have got through every fight comfortably.

It is one of those things and, for me, it just provides extra motivation to get things right. It just makes me train harder and gives me the desire to prove everybody wrong come May 19 – those who don’t believe.

There are plenty of people who do believe – those who have seen the journey. I am used to it now, I have been knocked since I won the British title and it was said I wouldn’t go beyond that level.

Well, here I am, about to box for a world title and it is all or nothing this time because I don’t have the pressure of needing to win this one to get the big fight – this is the big one.

I think people just presume I am going to approach the fight in one direction and go in straight lines like I haven’t got a boxing brain about me.

I’ve proved on different occasions that I can box in different ways against all sorts of opponents and have always been able to adapt. I’ve got plenty more armoury in the locker if needs be.

THE KAISER CHIEFS will be playing me out on the night as there is a bit of a Leeds connection there and a couple of the band members have seen me fight a few times.

I had mentioned it in a few interviews that the ideal scenario for me fighting for a world title would be for it to happen at Elland Road with the Kaiser Chiefs playing me out.

Once it all starting falling into place, the next thing I know they had agreed to play.

It is fantastic to have them onboard and, if anything, it will add to the atmosphere even more.

They are going to have a full stage and, at one point, they wanted me to have a Naz Hamed style entrance with me coming down from the stage.

It will be a bit more subtle now because I’ve always wanted to come in from the tunnel, so that is how it is going to work.