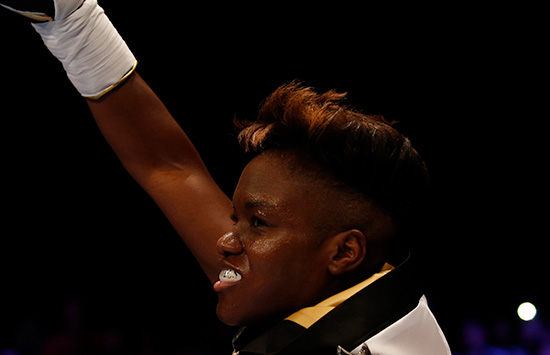 As they say in panto land, there’s nothing quite like a Dame. But as the curtains come down on the season of make-believe and blow business now takes centre stage from show business, the sport may have a real one if its own to applaud later this year.

The Whitehall whisper is that two-times Olympic boxing champion Nicola Adams is set to be elevated to a damehood should she win her first professional world title on March 8.

The little Leeds warrior would be the perfect recipient for that invite from the Palace; a true champion not only in boxing but of female emancipation in sport – and life- a role model who works hard for charities and is passionate about waving the flag for Britain.

The much-missed Sir Henry Cooper was boxing’s one and only knight while two female boxers have been honoured with gongs: the formidable Jane Couch, who once famously flattened a bloke who patted her bum in a Fleetwood bar, received an MBE as one of the game’s female pioneers, and Adams has an OBE for her Olympic exploits.

But I believe a damehood now beckons either this year or on her eventual retirement. She would join a clutch of sporting dames, most famously among them athletes Jessica Ennis-Hill, Kelly Holmes and Mary Peters, sailors Naomi James and Ellen MacArthur, golfer Laura Davies, Paralympian Sarah Storey and rower Katherine Grainger, who now chairs UK Sport.

There are even a couple of Baronesses, record-breaking Paralympian wheelchair racer Tanni Grey-Thompson and West Ham’s vice-chair, Karren Brady, who both sit in the House of Lords (shouldn’t that now be Lords and Ladies in this PC age?). The late cricketer Rachel Heyhoe-Flint was also made a peer.

It is the first time an all-female bout has been billed as the main event in the UK and the first time a woman has boxed at the Royal Albert Hall. . “Nicola deserves it,” says her promoter Frank Warren.”I used to be well opposed to women’s boxing but she has won me over. She has that winning mentality which is so important in this game and is already a national icon.”

Friday 8 March happens to be International Women’s Day as well, as Adams has been quick to point out.

The fight marks Adams’ sixth as a professional and she says winning would be “up there” with her two Olympic titles.

“This is the reason I’ve turned professional,” she said.

“I’ve achieved everything there is to achieve as an amateur, and I wanted to go on and get the world title as a professional boxer, just like my hero Muhammad Ali.”

Adams had her first peek inside the Royal Albert Hall’s ornate arena this week and said ther grandeur took her breath away. “What a fabulous setting for boxing. You can really sense the history.

“To think Ali has boxed in the same arena I’m boxing in is unbelievable for me. To come away with a world title and call yourself a world champion is every boxer’s dream. I can’t wait to get in there to be able to perform and prove to people I belong at world level.

“It’s unreal. I’m thinking about the noise, the crowd. If I can I’ll be going for the knockout – I want to make a big statement. I can’t wait to get out there and get going.

“It’s going to mean everything to me.”

In 2012, Adams became the first female ever to win an Olympic gold medal and in Rio was the first to successfully defend one.

She adds: “But for the Olympics opening up for us it would have taken many more years for women’s boxing to make a real break-through.

“If it hadn’t happened then it probably would have been too late for me. I’ve been lucky with the timing. Before 2012 a lot of the public didn’t even know women boxed.

“I guess it’s been the same for all women’s sports. Thirty years or so ago, Paula Radcliffe would not have been allowed to take part in long-distance running.”

The Royal Albert Hall first staged competitive boxing in 1918 and bill-topper Adams’ contest will be the first world-title bout at the venue since Mexico’s Marco Antonio Barrera defeated Britain’s Paul Lloyd in 1999.

Barrera’s compatriot, Mucino, 29, is an equally tough cookie. She claimed her world title in February and has a record of 27 wins, two draws and three defeats throughout 10 years as a professional.

“I’m hoping that’s how she’ll come in because she won’t want to take five of my punches. She might as well take that belt off now because its coming home with me.”

Cinderella will be the pantomime at the Royal Albert Hall this year but boxing’s putative Dame is clearly convinced she will upstage it and make history again as the nation’s first female world champion. Oh yes she is!

Dozens of tributes have been made to the late Hugh McIvanney, including my own in Boxing News this week. Britain’s greatest sports journalist of his – or arguably any – generation who passed away last week just short of his 85th birthday wrote beautifully, elegantly and with much envied insight into on a plethora of sports from football to racing but none more so than boxing.

He has been rightly described as “The Muhammad Ali of sportswriting.” .

With distinguished colleagues such as Colin Hart, Ken Jones and Jim Lawton I was privileged to travel the world with Hughie, covering big fights from Atlanta to Zaire, and numerous Olympic Games and World Cups. It was a joy, and always an education to be in his company, despite the perpetual fog of Cuban cigar smoke and combative argument.

obsession with detail and accuracy. The ultimate perfectionist, he had only one deficiency: Deadlines.

I was once on the receiving end of a tirade in the early hours of a Sunday morning after he had picked up a copy of The Observer bearing one of his big fight reports, which as usual we had just squeezed into the last edition as he relentlessly beavered away, labouring over every syllable.

When my bedside phone rang at 7am he roared: “What a f****disaster that was last night!”

“Well, it was a bit late, Hugh “I replied. “Och, I don’t mean that,” he snorted in his Ayrshire brogue, and began to berate me for not spotting a literal in the piece he had dictated to a copytaker who had mis-spelled the surname of the referee, Mickey Vann. It had appeared with only one N. “Jesus Christ,” roared Hugh. “Everyone will think I’m an idiot.”

Hughie was far from that, He was a genius