THEY TALK A GOOD FIGHT, BUT WILL IT DELIVER? 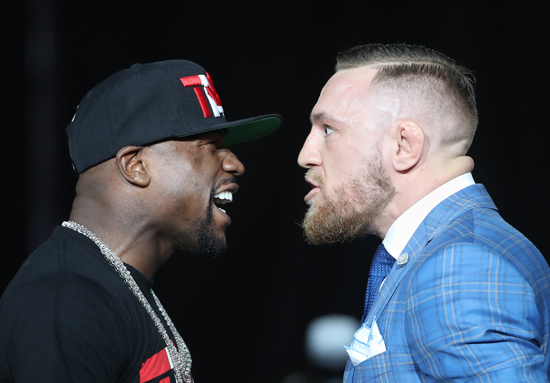 The Mayweather-McGregor roadshow rocked into London last week for the final leg of a media tour that, if nothing else, has got people talking.

It was purely pantomime at times and the pair came out with everything you might have expected them to say. Up to now the build-up has been a combination of boxing, UFC and WWE.

Once the bell goes, however, reality is going to set in.

The reality is something that is going to be interesting as far as Conor McGregor is concerned. Floyd Mayweather has been there and done it as a boxer, has been in this position many, many times, although he is older now at 41, which leaves a small question mark.

For McGregor, everything is a question mark in boxing terms – the whole thing. Being in the boxing ring is completely different from what he is used to in UFC, so he has got it all to do.

Despite the dissenting voices – and there have been a few of them, mostly from the boxing world – people are going to buy it and that is the end of it. The UFC have got a big global audience and this is the best guy in UFC fighting the best of his time in boxing.

The trick, you suspect, will not be to overplay further meetings between the two or they will run out of things to say by the end of it and there is the danger of turning people off.

What many of the younger generation don’t realise is that if Ali and Frazier were around today they would eclipse all of this. There are other matches too, such as Leonard-Duran, Leonard-Hagler, Hagler-Hearns – all of these guys.

The hoopla around these fights, if they were to happen in this day and age, would be much bigger because these were fights involving the best against the best at their prime.

And those greats were never short of things to say either.

IN THEIR CHAMPIONSHIP Circular issued last week, the Board of Control in my opinion, got things back to front where the light heavyweights are concerned.

The now world ranked Anthony Yarde was nominated for an eliminator for the British title against Hosea Burton, with Callum Johnson put forward to challenge the current champion Frank Buglioni.

I believe Anthony is more than ready to go directly for the title and it is a fight Buglioni has publicly indicated he is up for so, to my mind, an eliminator would represent an unnecessary delay to a fight the fans would want to see.

The Board actually have no objections to switching the order if the fight can be made, so we will see what can be done and it shouldn’t be a problem if Buglioni genuinely fancies it.

One thing is for sure though, we will decide who our man fights and we won’t allow his progress to be stalled.