This time joker George can stand up and rule the world

I am backing George Groves to go and as he predicts and steal the show from bill-topping Floyd Mayweather Jnr – as well as win the super-middleweight title – when he challenges the WBC champion Badou Jack in Las Vegas tomorrow night.

This fight will be televised live from the MGM Grand Garden Arena together with Mayweather’s threatened final ring fling against fellow American Andre Berto.

It is another tasty coup for boxing’s exclusive channel of champions – which has also captured the Golovkin–Lemieux classic next month – and one worth staying up for or setting the alarm for a 1am on Sunday morning.

The ginger-topped Saint George, a regular cheeky chappy, once aspired to be a stand-up comic but admits he found delivering patter on stage more terrifying than swapping punches in the ring.

But there will be no sign of stage fright when he tackles the Vegas-domiciled Swede (a Muslim whose mother is from Stockholm and father from Gambia) in what is booked as the warm-up to Mayweather’s swansong.

This is make or break for George, and he knows it. He’s got to win this.

It is his third crack at a world title and he needs to be up there with his west London neighbour and long-time bitter rival James DeGale, with whom he has exchanged unfriendly fire, and who beat him to the punch by winning the IBF version of the title in Boston earlier this year. He won’t get another chance so quickly.

Jack wasn’t a headline-maker until he nicked a majority decision over Anthony Dirrell in April to become the WBC champion and his record of 19 wins in 21 bouts with just 12 stoppages doesn’t suggest that he carries anything like the jackhammer punch with which Carl Froch knocked Groves out cold at Wembley.

But what Jack does have going for him is his hand speed and the fact that he is on home turf and is one of Mayweather’s fistic menagerie. Which is why Groves must go for a fast start and go for a KO himself against an opponent who showed his own vulnerability when clipped and stopped by journeyman Derek Edwards inside a round last year.

Groves (21-2, 16 KO’s) sensibly has been away from the comforts of his Hammersmith home since early July, training in Big Bear, California, the famed  high-altitude boxing boot camp tucked away in the San Bernardino Mountains outside Los Angeles. It’s a popular base for fighters including Saul ‘Canelo’ Alvarez, Gennady Golovkin, and at one time, Oscar De La Hoya.

Groves says he has spent more preparing for this fight than he earned in his first three or four pro bouts. It could prove a sound investment. 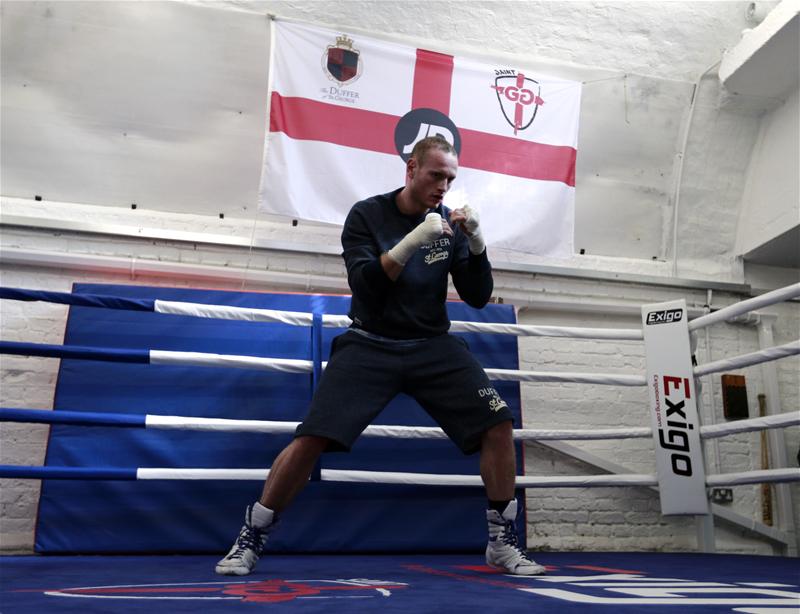 I’m sure that with the purses he pocketed from the two Froch fights he is pretty much secure, but winning the title is a matter of pride.

He may have earned some decent money, but now it is about the glory. And, of course, victory in Vegas will lead to even more money, with lucrative all-British unification bouts against DeGale or hopefully, Frank Buglioni should the Wise Guy beat Russian Fedor Chudinov for the WBA belt at Wembley on Saturday 26th September.

I have to be honest and say I thought DeGale just beat him when they fought on my show in 2011 but he’s exciting to watch and he can punch.

He can turn fights round when things seem to be going against him, as he did against Kenny Anderson, when he came back after being knocked down.

I strongly fancy George myself, but I know one or two people in the business, whose views I respect, who don’t. It’s genuine 50-50 match-up.

What’s more there’s usually a bit of controversy in his fights so it should be compelling viewing.

Recent results indicate that the US is no longer hostile territory for British fighters but I only hope for joker George that there’s no funny business and that he gets to deliver his best punch-lines.

Farewell Floyd? Don’t bet on it

As for Mayweather, he may well insist this will be his last fight, but I see that his father now says that it won’t be – and I go along with that. The magic 50-0 sounds better than 49-0.

I don’t think there are many fighters around at the moment who can seriously trouble him and he will probably pick one to break that Marciano record in the spring of next year, and justify his claim to be TBE.

As he says himself, the name of the game is to hit and not be hit – and he’s certainly got that down to a fine art. What he does outside the ring may get up a lot of people’s noses, but once the bell goes he always does what he says he’s going to do. The business.

The Pacquiao bout may have been a disappointment as a fight because of the styles as I said that it would be, but as an event it was what he said it would be.

Whenever he gets in the ring it’s a happening. But make no mistake, Berto may have been written off by most critics but he’s not coming into the ring to roll over. The one thing about him is that he likes to fight and if Mayweather boxes in the early rounds as he did first time against Maidana, who knows what might happen?

Maidana managed to rough him up and he unsettled Mayweather, he even started to show his age a bit. He was caught unawares. If it happens again tomorrow, the world could be in for a great shock.

Mayweather has obviously peaked and he’s admitted that, but he does keep himself in magnificent shape and there are plenty of fighters who could have taken note of the way he looks after himself between bouts.

Meanwhile, tonight in South London, Anthony Joshua challenges for the Vacant Commonwealth Heavyweight title against Scotsman Gary Cornish in what should be a forgone conclusion.

Joshua’s a nice lad and a great talent, but Cornish is unlikely to give the Olympic Champion the test we are waiting to see.  I fear as soon as Big Josh explodes on his chin it will be all over.

Cornish might be unbeaten, but this is hardly a test for the WBC number 2 ranked heavyweight.

He might be a Braveheart, but he’s going to need a brave chin.

Why boxing is such good news

I am glad I am not alone in banging the drum for boxing.

There was some recommended reading in the Sunday Telegraph last weekend where their industrious boxing correspondent Gareth A Davies penned a well-argued piece about the resurgence of the sport in Britain.

He pointed out that it truly is a new golden age, with more fighters, more shows and bigger crowds than at any time in the last 20 years.

If you missed it, I suggest it is well worth catching up with online at www.telegraph.co.uk/sport/othersports/boxing/

It contrasts with what some of the footy-obsessed sports editors seem to be thinking about boxing. No-one can say at the moment that boxing isn’t popular. We’re getting good gates, good viewing figures – it’s a success story, both at professional and amateur level, with more youngsters than ever taking up the sport.

Boxing Board general secretary Robert Smith is right when he is quoted as saying that boxing has never been healthier in this country, with a record number of fighters and promoters. Plus seven current world champions and three interim world title holders. Beat that.

If it was on terrestrial television, can you imagine how much greater this interest would be.

Isn’t it ironic that the only channel that hasn’t shown boxing in recent months is the BBC. This is quite outrageous in my view. I turned on the TV last weekend and the Beeb were showing horse trials from Burleigh.

I’ve got no problem with that, but I’m sure that more would be attracted to a boxing event than what they call eventing.

The argument by some terrestrial TV people is that when they show boxing regularly they still lose out to satellite TV when it comes to the really big fights; but it is the same with football – they don’t get the Champions League final or the Premier League live.

There’s plenty of good boxing around, they don’t have to be world title fights. There’s nothing wrong with watching some of the brilliant young prospects around at the moment making their way up.

As far as boxing is concerned, Britain really does have talent.

Tomorrow: Hubbard’s Cupboard on the remarkable life and times of boxing’s Oscar winner.