THOMPSON VOWS TO SERVE UP SUCCESS IN THE RING 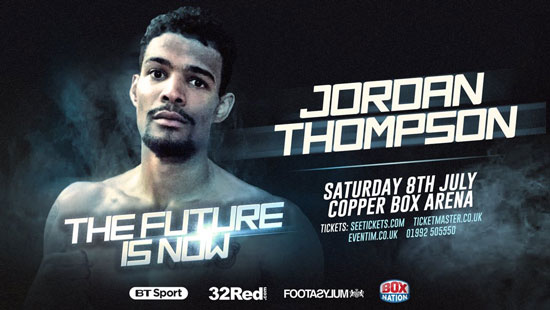 It could have been game, set and match for Jordan Thompson at the Wimbledon tennis championships, but the only ace performances he is bothered about now are in the boxing ring.

The unbeaten Manchester Cruiserweight gave up a promising tennis career in 2012, but now still plays in local club competitions despite his busy boxing career as one of the sport’s top prospects.

Punching opponents instead of  punishing them with a racket has paid off and Thompson bids to make it a magnificent seven professional wins at London’s Copper Box Arena on Saturday.

“Could I have played at Wimbledon? 100 per-cent. I was in the wrong sport if I didn’t believe that,” said Thompson who had his first professional fight in December 2015.

“Grass was my best surface. I had the big serve, but I wasn’t the best at volleying. I would have given it a good go though if I played at Wimbledon.

“Boxing is lot less stressful at the minute and easier. I feel more in control of my career.

“When I get in the ring it is down to me.  I have the capabilities to end a fight. In tennis you can have a dodgy call against you. There are so many variables in tennis it is crazy.”

Thompson, 24, plans on spending some time at the Wimbledon tennis tournament if all goes to plan and he defeats Jan Hrazdira on Frank Warren’s ‘The Future is Now’ bill’

He added: “I love Roger Federer player because he makes it looks so easy and Nadal because he is the ultimate warrior, the complete competitor.

“I know people playing there so I am planning to go, but this week I will relax for the fight by watching hours of tennis on TV.”