TICKETS GO ON SALE FOR ‘THE POWER OF LONDON’ 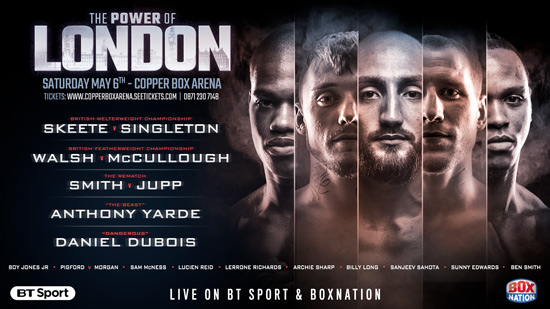 Welterweight supremo Bradley Skeete tops an unmissable evening of action when he makes the second defence of his prestigious Lord Lonsdale Belt against Shayne Singleton at the Copper Box Arena on Saturday 6th May, live on BT Sport and BoxNation.

British, Commonwealth and WBO European Champion Skeete has climbed to the very top of the domestic Welterweight scene and is determined to win the Lonsdale strap outright before setting his sights on World honours later in the year.

“Psychologically I’m right ‘on it’ with my British title at stake,” said Skeete. “I desperately want the Lonsdale Belt outright so the title defences mean everything. I know every challenger will desperately try to take what’s mine so I’ll be training really hard.

“Shayne’s got a good record and some good wins like Curtis Woodhouse and Adil Anwar. He’s got fast hands, good movement and, given the notice he’s had, we expect he’ll bring his A game.

“I’ve seen it all before; those that come to rough me up, those that come to run away. I’m ready for anything. If Shayne gives me the charge, I’ll box his ears off. If he picks and pokes, happy days. No domestic welter can outbox me. I should definitely be stopping him.”

Since debuting in August 2009, the Karl Ince coached contender has picked up the English Super-Lightweight and WBC International Silver Welterweight title and plans on adding Skeete’s British belt to his collection on May 6th.

“They don’t give British and Commonwealth titles away,” said Singleton. “Bradley is quality. The lad’s got everything; fantastic range and he rarely gets hit. But I also see a way of beating him and that’s why I took the fight. Others are expecting a cautious, cagey affair but they’ll be in for a shock. Expect the unexpected!

“I believe my speed, accuracy and movement will trouble him, big time. I’ll make him answer questions and just believe I’ll be too much for him on the night. Just like Adil Anwar, Skeete’s very awkward and bounces around….but the outcome is gonna be exactly the same.

“Winning a British title would mean everything to me. After winning the Masters, the English and WBC International Silver, this is my world title. I couldn’t give two monkeys about anything that happens thereafter.”

Chief support on the card sees Cromer hero Ryan Walsh defend his British Featherweight belt against Belfast’s Marco McCullough. All action Walsh etched his name into the boxing records books when he won the title in September 2015  to join twin brother Liam as the first ever set of twins to hold the prized Lonsdale belt simultaneously and is aiming to get back to winning ways after losing to Dennis Ceylan in Denmark last time out.