TIME FOR A SUPER-CHARGED TURBO 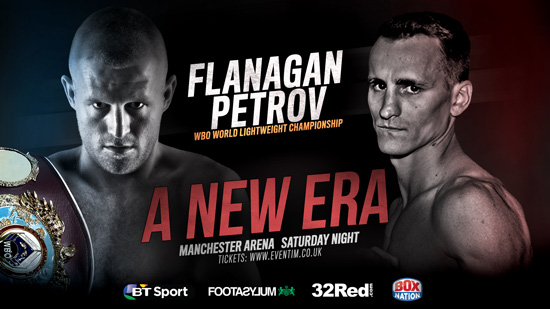 The owner of currently the longest unbeaten record in British boxing for an active fighter has every incentive to extend this sequence when he faces his toughest test yet on Saturday.

Terry ‘Turbo’ Flanagan hasn’t been overly troubled during his innings so far of 32 not out in a knock that includes five world title contests.

At the Manchester Arena this weekend he makes a fifth defence of his WBO world lightweight title against the top-ranked Russian Petr Petrov and, for once, he could find himself on a sticky wicket.

There is absolutely no doubt that Terry will have to be on his game against the seasoned 34-year-old with 44 fights on the clock.

This is now a mandatory defence of his title for Terry as the prospect of Petrov was a fight the previous No.1 contender, the much vaunted Felix Verdejo, wanted no part of.

It makes the Madrid-based mauler the ideal test for Terry to demonstrate he is ready to move to the next level. To my mind, he is the toughest out there who is not a world champion.

It is pleasing that people now really seem to be catching onto the fact that Terry is the genuine article and fingers crossed, he comes through the big test he is up against on Saturday so he remains in position to be pitted against the other title holders.

The thing is with Terry, if you know him you get to see and hear his sense of humour and character, but publicly he is very quiet and appears not to have much to say for himself.

But, the bottom line is, he can fight.

What we want for him next – assuming Petrov is successfully accounted for – is a unification fight or the biggest test out there, which is Vasyl Lomachenko.

BoxNation viewers will be able to watch both Terry and Lomachenko this weekend and, if they both come through, it could set up what would be a mouthwatering match-up.

Lomachenko defends his WBO world super featherweight title against Jason Sosa in Maryland, with coverage beginning from the MGM National Harbor at 3am.

It tops off a feast of fights this Saturday, with screening of our Manchester show commencing at 5.30pm through to roughly midnight, followed by probably the world’s top pound-for-pounder in the early hours.

To fill in time in-between the boxing bills, the fighting theme continues on BT Sport with UFC 210 on at 1am. It is a weekend that will certainly pack a punch.

Sosa, perhaps best known over here for his defeat of Stephen Smith in November, is not a knockover for Lomachenko by any means. But, in keeping with his stage name of High-Tech, the Ukrainian keeps pushing the limits and astounding people with his technical brilliance and stinging shot selection.

He just keeps raising the bar.

If Terry does the job we think he will on his home patch against Petrov, we want to jump straight into deep waters with him, which means a match with either Jorge Linares or Lomachenko.

The stakes are now getting very high. Time for a super-charged Turbo to do the business.