TIME FOR SMITH TO SHINE 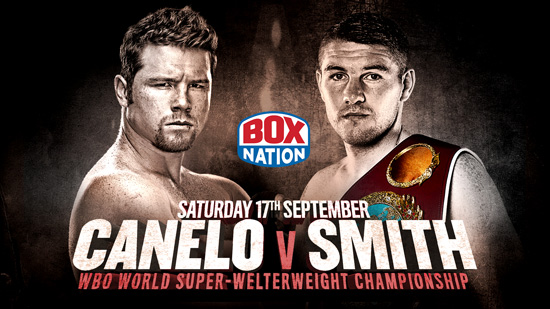 There is not long to go now before Liam Smith gets a golden opportunity to propel himself to the forefront of world boxing. If he can add the scalp of Canelo Alvarez to his ring CV then that is where he will rightly be.

The setting for the biggest boxing event of the year is simply stunning and ticket sales have been booming for what is an intriguing main attraction at the AT&T Stadium in Texas where the most major player in the sport bids to, once again, strap a world title belt around his waist.

It is certainly the Canelo show out here, with the promotion put on to coincide with the weekend of Mexican Independence Day but, on this occasion, he is the challenger for Beefy’s belt and there is absolutely no chance of him having it all his own way.

Even though he is the champion, taking on such a marquee name as Canelo does represent a great chance for Liam to make the boxing world sit up and take notice. There are a lot of world champions around and, these days, you do not get the respect of the fans by simply clocking up routine defences.

The best ones dare to be great and that is what Liam is doing here. He has always wanted the big defining fights, the ones that get remembered many years down the line.

He has got his wish and most people will consider him the underdog, not least the bookmakers. He is going to have to upset the odds, he knows that, and I give him a big chance of doing so. Sometimes you need to find out how good you are and the only way of doing so is measure yourself against the best – and Canelo is certainly up there.

Forget the Amir Khan fight, Liam is a completely different animal. He is tough, strong, wily and spiteful – also a natural super welterweight and a big one at that.

When it comes to the scales, the major talking point, I imagine, will be how Canelo looks at 154lbs after not having fought at the weight for a little while. If he has struggled to get that extra pound off it might help.

There is always a lot of talk about the weight Canelo actually enters the ring at, with suggestions that he puts on over 30lbs between the weigh-in and the fight. I really don’t think this is the big deal so many make it out to be.

Piling on pounds for the sake of it is like sticking a rucksack on you back. Why would you want so much extra weight? It is not going to make your chin any better or make you faster.

What are you putting into yourself? A lot of fluid? If it is food then all you will do is slow yourself down. There is an old saying in boxing that goes ‘shit weighs heavy’ and there is no point in carrying surplus for the sake of it.

Whatever weight the pair are when they finally touch gloves, I think we are in for a bit of a tear-up, I really do.

Once that bell goes, I don’t think there will be any of that feeling each other out business and I suspect it could be brutal. BoxNation viewers are in for a treat and coverage from the home of the Dallas Cowboys begins at 1am.

I predict this will be one well worth waiting up for.