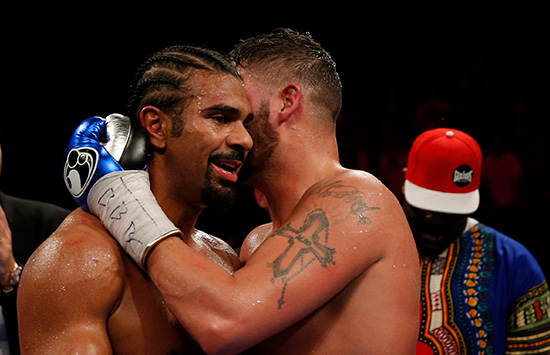 After the hype, the hugs. Inevitably Tony Bellew and David Haye embraced like long lost brethren at the conclusion of Saturday’s fistic tale of the unexpected. As we always knew they would. They even exchanged kisses.

That’s traditionally the way of the boxing world – thank goodness.

Mutual respect has always been the name of the game once the insults and blows have been delivered, and the blood wiped away.

All the pre-fight bad mouthing is exposed for what it is. Hogwash -designed to put bums on seats and fingers on the pay-per-view button.

So it was with Haye and Bellew, though much of it was beyond the pale which is why the British Boxing Board of Control will have their hands full at their monthly meeting in Cardiff on Wednesday.

They say they will ‘discuss’ the disquieting, occasionally disgusting   verbals, and the media consensus at the O2 ringside was that they will add to the agony of the Hayemaker’s ruptured Achilles by relieving him of a sizeable chunk of his reported £4 million plus purse.

Well, we’ll see. More likely it will be another slap on wrist at which the Board are customarily quite adept.

Yet unquestionably the manufactured pre-fight nastiness in this case demeaned a sport which, in recent times, has gained more than a modicum of respectability in the public consciousness.

The Board should have exercised much more control – and so should Sky and Matchroom promoters.

Haye was significantly more vocal than his gobby Liverpudlian opponent, but Bellew did his share and should not escape the Board’s condemnation and a hefty fine.

The luvvie-dovey rapprochement at the end – as predictable as the fight itself was unpredictable – should not temper the Board’s displeasure at the earlier conduct.

Haye is a curious animal, certainly not all mouth and boxing shorts. He can actually fight when the mood takes him. He even gained perhaps more respect for his valour and refusal to make excuses for his injury in defeat on Saturday than he would have done had he won, and most of us believed he would.

He also happens to be the most recognisable – and probably the most popular – character in British boxing, a supreme showman-salesman drawing an audience from outside the sport. Yes, even more so than Anthony Joshua. But his ring future is now in serious doubt.

Of course haranguing and dissing opponents is not new. Muhammad Ali was the master of mouthiness – but I never heard him curse or threaten an opponent’s life. Or actually demean a white opponent, except in jest.

I recall when he fought Oscar Bonavena in New York and the Argentinian apparently infuriated him by calling him ‘maricon’, Spanish for queer or faggot, the worst insult you could, have aimed at boxing’s serial womaniser.

An outraged Ali, threatened all sorts of mayhem, saying he would never forgive Bonavena. After he had duly ko’d him we expected Ali still to be spitting venom at the press conference. Instead they sat arms entwined, giggling away.

“Why aren’t you still angry?” Ali was asked. He winked. “Fooled you all, didn’t we. I told him to say that. We were just selling tickets.”

So were Haye and Bellew, but they overstepped the mark.

On Wednesday the Board should also be turning their attention to the arithmetic aberration that was ringside judge Ian John Lewis’s assessment of a draw in the WBC world title contest between Rey Vargas and Doncaster’s Gavin McDonnell in Hull the previous weekend.

Just about everyone else found it incomprehensible. McDonnell and his team happily accepted that Vargas had won clearly – by four and six rounds respectively according to the two foreign judges.

I am not the greatest fan of the Kent prison officer, himself a former pro, as a rather over-fussy referee; and now less so as a judge.

I agree with Frank Warren that such miscalculation does the game over here no favours at all when it comes to enticing champions to defend titles against our boxers.

I don’t mind a non-scoring British referee but surely in the interests of transparency all judges in world title fights held here involving home boxers should be neutral.

The Board must seek an explanation as to how Lewis reached that 114-114 marking because it just doesn’t add up.

Also on their agenda will be the recent report in The Sun that some foreign fighters –notably from eastern Europe – have been imported here with fake records.

The Sun claimed that 89 British fighters – Dillian Whyte and Dereck Chisora included – may have faced overseas opponents whose records have been falsified because of the absence of an international regulator overseeing the sport.

However the Board, who are widely recognised for providing perhaps the fight world’s highest standards for health and safety, seem satisfied their approach does not need to change.

“I’ll have to discuss it and bring it to the board’s attention but whether we’ll change our policies, I don’t know,” said general secretary Robert Smith.

“We’re very strict in what we do. We do as many checks as we can and are satisfied that things have been done correctly.

“We certainly know of issues in eastern European countries where we question whether fights are legitimate within their commission. We knock back a lot of boxers we do not deem to have had properly authorised contests.

“But for every overseas boxer who takes part in this country we receive confirmation that they are licensed.

“Over the last couple of years we have looked into the issues, we have to take it on good faith that other commissions in Europe are telling us the truth. We’re always looking at things and if we need to question something we will.”

“Regardless of anything else, the board’s safety record and regulations are second to none,” he says. “They’re our safeguard.

“The safety checks are in place: they must be able to produce their medical records, MRI scans, blood tests, eye tests.

“If I ever found out that someone had falsified a record, I simply wouldn’t work with them, and I’d report it to the authorities as well if I had proof. I do everything I can to protect my sport ”

That’s good to hear, and so must the Board do all they can to protect and maintain boxing’s new-found popularity, public affection and that crucial word, respect.

Coming up next: Part Two of the Big Interview with Sunny Edwards