TITANIC BATTLES AHEAD FOR THE BELFAST BOYS 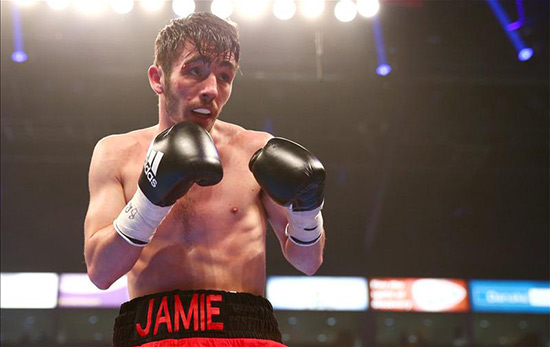 On Saturday night BoxNation is back in Belfast with a bang – and it is sure to be compelling viewing.

Belfast is one of my favourite fight cities where the people absolutely love their boxing and come out in their droves to support the local fighters.

I am happy that we now have a few Belfast boys on our books, which gives us every incentive to make regular return visits. That is our intention.

The show on Saturday – part one of a terrific exclusive BoxNation Transatlantic double header featuring Manny Pacquiao’s WBO welterweight title challenge against Jesse Vargas from Las Vegas — is headlined by Jamie Conlan, the Irish ‘Mexican’, who has a habit of being involved in thrillers when he steps into the ring.

I am told it is not intentional and his coaches and his fighting family always instruct him otherwise, but boxing clever to a game-plan tends to go out of the window once he tastes a bit of leather.

He has certainly put his family through the wringer in two of his last four fights – against Junior Granados and Anthony Nelson – but the battles have been an absolute treat for BoxNation viewers.

The fight against Nelson for the Commonwealth title back in April at the Copper Box was an absolute barnstormer and was rightly called winner of ‘Fight of the Year’ at the British Boxing Board award bash.

I am pleased that we are able to bring Jamie back to his home city and who knows what we will get this time? Anything but a boring fight, I strongly suspect.

Jamie always appeared to be on a collision course with Paul Butler for what I am sure would have been an absorbing contest, but with Butler now operating at bantamweight that one has gone for now and Conlan is now looking at the bigger picture in proving himself at world level.

At the recent WBO convention in Puerto Rico I secured a final eliminator spot for the super flyweight world title and that is now firmly on the horizon as long as he keeps his unbeaten record intact at the Titanic Exhibition Centre.

The hugely popular triple Olympian Paddy Barnes makes his professional debut on the bill and he is also big news in Belfast.

I don’t anticipate Barnes taking too long an apprenticeship in the pro ranks because he was an incredibly well seasoned amateur who can be fast tracked towards title success once he gets going.

One worth keeping an eye out for is the Peter Fury-trained heavyweight Con Sheehan, who has clocked up three wins so far.

Peter predicts big things ahead for the 27-year-old and you have to take him at his word because he is one man who knows his stuff when it comes to heavyweights.

BoxNation is on air at 7pm from Belfast before we switch to Vegas for a world title feast from the Thomas and Mack Center. More on the return of the Pacman ttomorrow