TOM STALKER: “I KNOW THERE’S HUGE FIGHTS LINED UP FOR ME”

Already well into his 32nd year, 2012 Team GB Olympic boxing skipper Tom Stalker knows that the sand in the timer is running perilously low as he endeavours to fulfil his dreams of lifting major titles in the professional code, writes Glynn Evans. 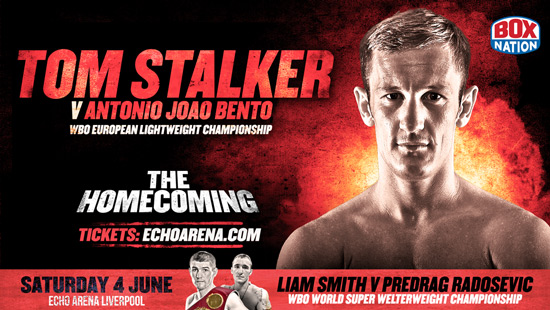 Among the most decorated English amateurs ever, the Spain-based Scouser stormed to nine straight wins during his opening 17 months since opting to punch for pay in February 2013. However, his arm has been lifted in victory just once in his last five gigs, following successive draws to Tommy Carus and Craig Evans (twice).

‘The results have been very frustrating but I know that during that period I’ve improved so much as a fighter working with my trainer Danny Vaughan in the MGM Gym in Marbella,’ insists ‘The

Captain’ who gets another break at championship level at The Echo Arena in his home city this Saturday when he fights Portugal’s Antonio Joao Bento for the vacant WBO European lightweight strap.

‘But Anthony Crolla has four losses and three draws on his record, Tony Bellew had two defeats yet both realised their dreams of becoming world champions. I need look no further.   All you need for your fortune to change is a little bit of luck and a lot of hard work.

‘There’s never been a shortage of the latter. I’ve got to where I am through graft and determination, not natural talent.

‘ In 2006, I remember sneaking off in me breaks as a dish washer at the Marriott Hotel to watch the England team win medals at the 2006 Commonwealth Games in Australia. I was so envious. By the next Games in Delhi, I was on the podium with a gold medal.  If you believe, you can achieve!

Besides, Stalker has turns things round before in a 13 year fighting career that commenced when he turned his back on petty crime and walked into the St Aloysius ABC, aged 18.

He recalls:  ‘Back in 2010, when I got beat in the ABAs, (Team GB Head Coach) Rob McCracken warned me that if I didn’t medal at the European Seniors in Russia later that year he’d have to chuck me off the GB squad.

‘And at those championships, I drew the reigning world champion Domenico Valentino from Italy, first fight. But I beat him then went on to reach the final. So I know that when the pressure’s really on, I deliver. That started the run where I won a Commonwealth Games gold medal in India, another European silver in Turkey and a World Bronze in Azerbaijan to qualify for the Olympics. I was then made Team Captain of the squad.’

And perhaps the situation isn’t quite as critical as some cynics seem eager to paint. Though matched stiffly in his 14 fight paid innings, the 5ft 10in southpaw has still only been beaten once – by the unbeaten and world rated Jack Catterall, whilst dabbling up at light-welter – and he certainly appeared to get the short end of drawn verdicts against fellow Scouser Carus and in the first scrap with ex GB squad mate Evans.

‘Take nothing from Jack, a very good fighter who was the better man on the night, but I’m only a lightweight. As I leave Spain today (Tuesday), I’m just one pound over the lightweight limit. I’m a 135lb fighter.

‘I had a 10 week camp for the first fight with Craig and, like most people, thought I won by a good three rounds. Last time, I had just five weeks and, being such a massive lightweight, had to resort to some crazy stuff to shift the weight.

‘On the night, I thought Craig nicked it by a round but reviewing the tape I thought a draw was fair. I’d accept a decider in a heartbeat.’

Formerly ranked the number one lightweight in the world as an amateur, the habitually chipper Liverpudlian refuses to be deflected from his dream of repeating his achievements in the paid brigade.

‘I desperately want the Liverpool fans to see how well I’m progressing. The city has the best fans and our fighters all get behind each other, regardless of what promotional camp they’re with. We all came through the amateurs together.

‘Meeting Daniel Kinehan (his manager) is the best thing that’s happened to me in my life. Like Danny Vaughan, he’s stuck by me through my loss and all the draws and keeps delivering. I know it’s all building to a point where I’m going to be in massive fights.’ 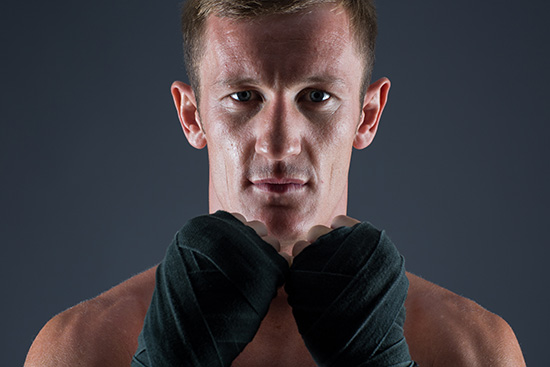 At his best, the lively Liverpudlian should certainly have the skills and pedigree to see off a 39 year old, 47 fight Portu-geezer before the home faithful.

‘I’ve had a 12 week camp in Marbella with Danny and, trust me, I’ve come on so much,’ he insists.

‘Bento has 18 knockout wins on his record so obviously he can whack a bit. But he’s also been beaten 15 times so that shows that he can be outboxed.

‘I’ll need to be clever, do a job on him and look good in the process. I know there’s a huge fight lined up for me if I win.’