At the age of 31, Team GB 2012 Olympic skipper Tom Stalker knows nothing other than a comprehensive victory will suffice when he squares off with ex international team mate Craig Evans for the vacant WBO European lightweight title on Frank Warren’s ‘World War III’ event at the Manchester Arena on October 10th.

‘The Captain’, formerly ranked number one amateur in the world after medalling at the European Seniors (twice), the Commonwealth Games and the World Seniors, has already stumbled twice in 12 pro gigs and knows he simply can’t afford another hiccup.

‘This is sink or swim and a must win,’ disclosed the chirpy Liverpudlian who is frequently accused of being simply too pleasant to prosper in the austere world of pro prizefighting.

He confided: ‘Lately, I’ve started seeing a sports psychologist because basically I’m too nice a guy. He’s helping to bring out the grit, the nasty side that I’ll need to succeed in the professional game.

‘In the past, I’ve been guilty of always giving everybody my time. I’d answer every phone, reply to every message. Lately, I’ve come off all the social media sites so I’ve no distractions. I want to put all my energy into my training, my tactics.’

‘It was my own fault. I found it easy early on, thought I had it in the bag but Tommy kept pushing. I started to tire and I can’t explain that because I always train very hard,’ said Stalker.

‘I definitely thought I won it but he had a lot of fans screaming at ringside and I think that influenced the ref, who scored it.’

Nevertheless, the reformed joy rider from Huyton insists that, right now, his life couldn’t be more dandy since hooking up with Irish manager Daniel Kinahan at the MGM Gym Marbella 17 months ago.

Tom says: ‘My life has really changed for the better. We instantly developed a great energy together and I’ve had fabulous career opportunities.

‘Spain is where my long-term future lies. My two girls are in Spanish schools here and I’ve another baby due in November. Once I retire, I’d love to become involved in the coaching set up at the MGM Marbella. It’s becoming a real big force. If not that, I’d consider the GB set-up. I still love amateur boxing.’

The manner in which he was ragged about the ring in the later rounds with Carus has persuaded the 5ft 10in Stalker to strim down to 135lbs where he believes he’ll start to profit from physical advantages. 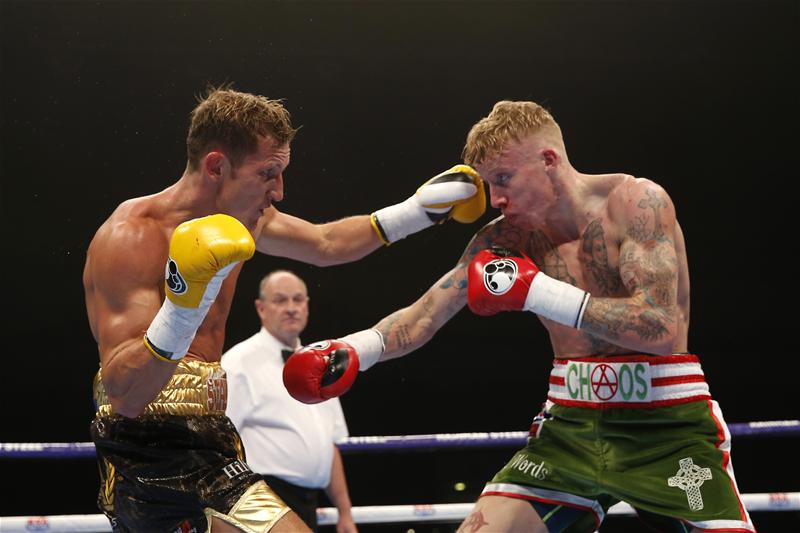 ‘My mate Bradley Saunders makes 10 stone but enters the ring above 11stone whereas for my last three I’ve weighed around 9.12 and come into the ring around 10.4, 10.5. Realistically, I’ve the body of a lightweight, albeit a big one,’ disclosed Stalker

‘I was making light-welter without really dieting. ‘The Taff-inator’ (in house strength and conditioning coach at the MGM) has sorted out my nutrition. I’m on a stricter diet. Obviously lightweight is harder to make but I still expect to be in the ring about 10.5.’

The WBO European collision with Evans might ultimately lead to a world title challenge with Manchester’s Terry Flanagan.

‘I’m happy to pursue the WBO route. A win will not only bring the WBO European belt but also a top 15 world ranking. It’s a big carrot which will allow me to really push on,” He added.

The bang up with ex British title challenger Evans (14-1) has certainly split the trade and could prove the show stealer on a bill littered with quality 50-50 match-ups.

‘It’s another tough one and I’m really looking forward to it,’ says Stalker who didn’t start competing until he was 19 and therefore still has low mileage.

‘This is the level of fight I want to be in, fights where the fans genuinely aren’t sure who’ll win. Either way, no one will be able to say the winner hasn’t beaten anyone.

‘This is the first time as a pro I’ll have entered as the underdog. There’s less pressure and I get a chance to prove a lot of people wrong.

‘I know what Craig’s about from our time together on the GB squad. I was lightweight, he was down at feather so we didn’t spar. He’s a very good southpaw who gave Scotty Cardle a close fight for the British title. Our styles should gel to produce a top fight but I’m confident of winning.

‘Craig likes to wait a lot and he can be pretty cagey. He’s got a good jab and back hand but against Cardle he sat off too much. I intend to do the things that made me such a good amateur; slow it down, out box him, make my natural size advantage pay. I believe I’m better all round; bigger, stronger, more skilled.’