TOMMY LANGFORD: “I CAN CAUSE BOTH LEE AND SAUNDERS PROBLEMS.”

The captivating world middleweight scene ignites into life again with Danny Jacobs defending his WBA title in a Brooklyn derby with Peter Quillin on December 5th while Andy Lee and Billy Joe Saunders slug it out for the WBO crown and bragging rights within the fight mad travelling community on December 19th. 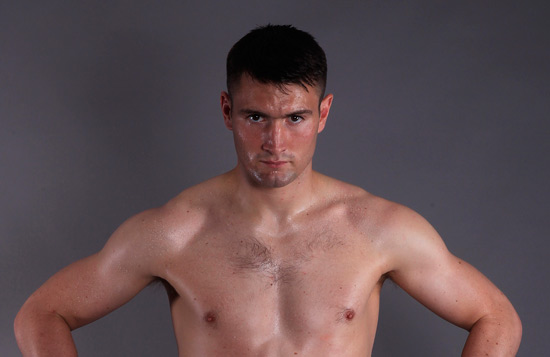 Both bang-ups shall be televised exclusively live in the UK on BoxNation and one man who’ll certainly be glued to the action is unbeaten Brummie Tommy Langford.

The super stylish six footer, who holds the WBO’s Inter-Continental title and a number six world ranking, is hell bent on grabbing a date with either winner in 2016.

‘Both are tall and look to land raking straight right hands. Quillin has excellent timing but can be tentative. Against Andy Lee last time, he missed the weight and looked slow and tired whereas Jacobs is on a hot streak and looked brilliant hammering Jarrod Fletcher. I’d slightly edge to Jacobs on recent form.

‘While Gennady Golovkin looks pretty indestructible right now, neither of those two scare me. It’s the big fights on US TV that every fighter wants to be part of.’

The 26 year old sports science graduate intends scrutinising Lee and Saunders from ringside at the Manchester Arena as he is scheduled to defend his Inter-Continental title for a second time earlier that evening.

‘That’s gonna be a great boxer-banger match-up,’ says Langford who has who 14 straight with four stoppage victories.

‘Billy Joe is fighting with a lot of confidence and is very elusive. No one’s really caught him clean yet and I see him outboxing Lee for long spells and just getting across the line. But you’re never safe in a fight against Andy Lee!’

While the ex England amateur captain and multiple national junior champion holds both main eventers in the highest regard, he is respectfully confident that he already has the skill set to neutralise either.

Langford says: ‘I feel I’ve got the answers to what they bring and I can cause both problems. My first child is due in April so I’d like to get that out of the way and, ideally, I’d prefer another three or four fights so I’d be more than ready but if a chance was offered early next year I’d take it, 100%.

‘There’s two ways to beat Lee. You can bully him on the inside like Julio Cesar Chavez Jr did, or you can try to draw his hook and chin him. He’s hittable, doesn’t have the best defence and he goes over.

‘The secret with Billy Joe is to throw in numbers cos he slips and slides around single shots. He always starts very fast but if I could stay with him and maybe nick a couple of early rounds, I believe my superior fitness could tell down the straight. He tires in every fight.’

To have any chance of justifying his claims, the mild mannered midlander knows it is imperative to deliver a performance whereby he both wins and woos against his challenger to be announced on the ‘X-Mas Cracker’ undercard.

‘I want to take another step up the ladder and convince the fans and pundits that I’m improving every fight; produce another progressive performance and hopefully another stoppage.’ he concludes.

The Channel Of Champions, BoxNation, will televise Lee v Saunders live and exclusive on Sky 437/HD 490, Virgin 546 and Talk Talk 415.  Subscribe at www.boxnation.com  Or watch online at Livesport.tv and via iPhone, iPad or Android.