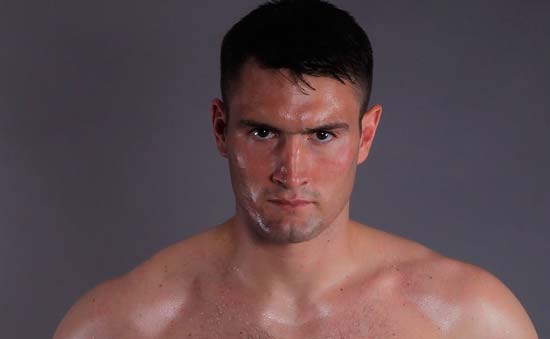 The 26 year old former England amateur skipper dips his toes into 12 round championship waters for the first time next month when he fronts up to Dronfield’s decent Lewis Taylor in a quality clash for the vacant Commonwealth strap at Liverpool’s Echo Arena.

‘Last year was fantastic for me,’ admits the articulate Devon born sports science graduate who has won 15 straight as a pro.

‘I had four good wins, won my first title (WBO Inter-Continental) and got a 10 rounder under my belt. Finally my performances are getting me credit and other people are starting to agree that I’m as good as I always thought I was.

‘In addition to my fights, throughout the year I really benefitted from quality sparring with the likes of Chris Eubank Jr, Liam and Callum Smith, Hassan N’Dam N’Jikam and Liam Williams. Mixing with such quality lads has been vital for my learning.

‘Sparring fighters beneath my ability can be intense but it lacks the intelligence, the cuteness, the mental challenges. Against the calibre I’m sparring now, you can waste nothing because every little mistake gets punished. It’s been really beneficial for my development. I’ve always had good offence. This forces me to eradicate silly defensive mistakes.

‘I’ve got all the punches. Now I need to improve my ring generalship, develop a greater understanding of when to throw which punches. At this level, you can’t afford to get game plans wrong.’

A stylish, highly skilled operator, schooled by respected coach Tom Chaney in Hall Green, Langford has latterly added some bite to his often beautiful boxing. Four of his last six victims failed to cross the finishing tape though he concedes he is more a breaker of hearts than bones.

‘I’ve never professed to be a banger but my punches hurt and my work rate combined with my boxing ability makes me every bit as dangerous,’ says the diehard West Bromwich Albion fan.

‘When I’m constantly throwing and landing, opponents have got to defend or get out the way. It must be very frustrating, highly demoralising. You notice their heads drop mid fight. When I land four or five in a row, it’s exciting for the fans.’

Ominously, Langford’s career path continues to mimic that of fellow Baggie Richie Woodhall – the former WBC Super-Middleweight champion – with whom he is so frequently compared.

Tommy says: ‘It’s ironic that, like Richie, my first major title shot will be for the Commonwealth. Richie reigned on the Commonwealth throne for a long time, before adding European and world titles. Let’s hope the similarities continue.’

Having impressively dispatched imports from Mexico, Argentina and Poland in his last three gigs, the six footer squares off with 18-1-1 Derbyshire rival Taylor in a fight that would have been a fitting bill topper at any small hall venue in the Midlands.

‘I really enjoyed the attention of being main event at Wolverhampton Civic against Rios but it’s equally good to be part of these massive bills. Rather conveniently the Baggies are away at Everton that day so hopefully a lot of fans will stay up for my fight,’ says Langford who already holds the WBO Inter-Continental belt and a world ranking of six with the same governing body.

‘Cristian Rios, who I shut out in October, was Argentine champion and a very good fighter but not recognised on these shores. So fighting a top ten domestic rival from the same region heightens interest, gives the fans and press something to get their teeth into.

‘Lewis is a big tall middleweight like myself, a good stand up boxer with a decent jab. He’s pretty busy himself so the fans are likely to see an exciting fight, a good spectacle. I want to win in fights like that. It’s better for recognition.

‘But it’s a case of levels and I aim to show that I’m a grade above Taylor. He’ll find there’s a difference between throwing lots of shots at defensive minded journeyman and getting away with the same thing against a contender like me. I’ll punish his mistakes.

‘I WILL win but the manner I win is increasingly vital this year if I’m to throw my name into the hat for a world title challenge to Billy Joe Saunders.

‘I intend to deliver a performance that’ll separate myself from all the other domestic contenders. That will open doors for me.   I’m confident I’ll force another stoppage.’