TOMMY LANGFORD: “SHEEDY’S GONNA BE SHOCKED WHEN I SET ABOUT HIM” 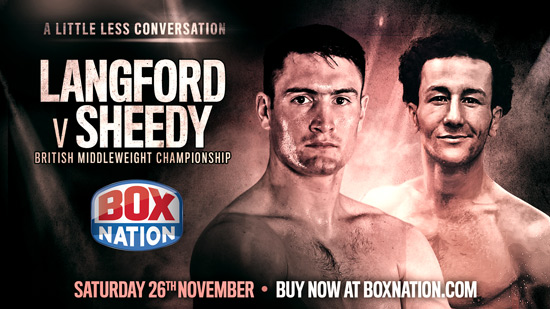 World rated Commonwealth middleweight king Tommy Langford walks the tightrope at Cardiff’s Motorpoint Arena on Saturday when he gambles his WBO number two ranking in a quest to add the Lonsdale Belt to his burgeoning collection.

On Thursday Glynn Evans caught up with the unbeaten 6ft Baggie bomber to contemplate risk versus reward.

What was your immediate reaction when Chris Eubank Jr vacated his British title rather than accept your mandatory challenge?

At the time, I was disappointed because when, like me, you go about your business without shouting and bawling about your opponents, it’s difficult to launch your career without facing a big name scalp, someone who can propel you into the top bracket.

A fight with Eubank would probably have doubled up as a WBO eliminator and victory would have put me right in the picture for a world title crack at Billy Joe Saunders.

And I was genuinely confident I’d have beaten Eubank. I’m not saying he’s not a good fighter but he’s definitely got flaws that can be exploited. He can be outworked and outboxed. I think it dawned on them that the risk outweighed the reward.

But if the Eubanks had no intention of fighting me, why not withdraw before purse bids were made? Why waste everyone’s time and energy? It’s backfired on them, big time.

But it no longer matters. Eubank is in the past. Chip paper. I’m glad we’re rid of them. I still get to fight for the British title.

What value do you place on the British title?

It’s huge, mate. Every British fighter wants their name in the record books as British champion. Winning the Commonwealth, then British is a prestigious route to take and, if I win, a crack at the European next would be fantastic.

WBO king Billy Joe Saunders – another on Frank Warren’s roster – tops the bill in Cardiff. Is your bout with Sheedy a dress rehearsal for a world title showdown between Saunders and yourself in the new year?

That’s entirely up to Frank and Billy. I’ve repeatedly said I’ll have the Saunders fight if it’s offered but you need two fighters to get in the ring and we don’t know what Billy’s intentions are. What I will say is, with the possible exception of the Jap (2012 Olympic champion Ryota Murata), if you scan in the WBO rankings there isn’t a more attractive challenger for the British fight public than me.

It’s up to me to put in a phenomenal performance against another southpaw on Saturday week to get fight fans juices flowing for a Saunders-Langford fight. Now, BT is on board, the fight would get projected to another level.

I’ll certainly have a little peep at Bill from ringside but I know all I need to know. We were in the same age group right through the amateurs and boxed on England squads together. Besides, having just won the British title, I’ll be on Cloud Nine. I doubt I’ll be able to concentrate!

Given your lofty world ranking, is the fight with Sheedy an unnecessary risk?

Look, every fight I take now is a risk. But it’s a risk that’s outweighed by the reward of becoming British and Commonwealth champion. It’ll improve my stock by more than if I didn’t fight Sam for the British title. The biggest risk is that I don’t look good. I need to look special. However, given the preparation I’ve had, I’m very confident that I can deliver in style.

You’ve capitalised on your love of West Bromwich Albion FC to attract a huge following among the Baggies faithful. Can we expect them out en masse again in Cardiff?

Unfortunately there won’t be quite as many as there would have been for Eubank on the original date (22nd October). But there’ll still be close to a thousand and I guarantee they’ll be very noisy. I’m looking forward to winning the belt for all of those who can make it.

You copped some serious flack from co-challenger Sheedy in a recent interview. How do you counter his claims that you’re boring, have no personality and that the Langford clan are all ‘chinny’?!

The only logical reason he’s doing it is to coax me into tearing after him and forfeiting my game plan.
Sheedy’s been very disrespectful but I find it quite funny. He just plucks random things out of the air. The Langfords are ‘chinny’?!  Well the only one to stop (brother) Jack was Anthony Fowler, a world bronze medallist, and in the 17 pro fights that have taken me to the Commonwealth title, I’ve dropped just two rounds, never been hurt, never been off my feet.

And if I’m boring, how come I can attract a couple of thousand people to pay good money to watch me box? There’s no weight behind anything he says. He’s completely deluded.

Stylistically, Sheedy poses a different set of challenges to Eubank. What do you need to be particularly mindful of?

Sheedy’s southpaw stance certainly won’t be an issue. I’ve sparred thousands of rounds with Frankie Gavin. Sam does have an awkward, ‘floaty’ style and he tries to be unpredictable. But we fully expect he won’t be conventional.

The challenge is not to get frustrated, use my superior boxing and break him down. If he’s serious about winning the British title, as opposed to just fighting for it, he’ll have to come at me, at some stage. That’s when he gets taken out.

How do you expect the fight to pan out? What’s your prediction?

I really hope Sam does show some fight and ambition. He’s boasted about his ‘hidden’ power prior to his previous fights but, let’s keep it real, he’s only stopped four in 18 fights and he’s never ‘iced’ anybody…ever!

I don’t talk trash so it’s imperative that I generate big interest through what I produce in the ring. Next Saturday Sheedy’s going to find out that the reason all my opponents go back foot is because I punch with authority. I hurt. He’ll be shocked when I set about him!
I predict a clear win for Tommy Langford. If he runs I’ll outbox him and systematically break him down. If he ‘brings it’, he gets stopped! 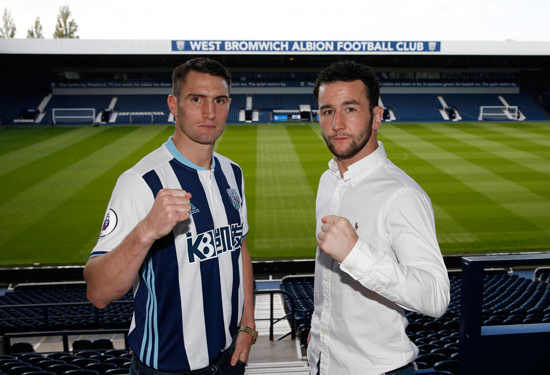