LANGFORD: “HAVING THE OPPORTUNITY TO FIGHT FOR THE BRITISH TITLE IS PHENOMENAL FOR ME AND IT’S A GREAT CHANCE TO PROPEL MYSELF ON TO THAT NEXT LEVEL” 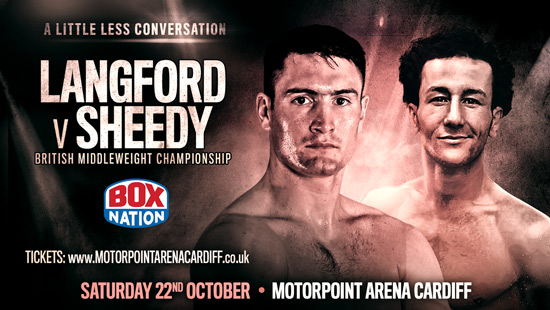 Langford, who holds the Commonwealth and WBO Inter-Continental Middleweight belts, is determined to win the famous Lonsdale Belt and write his name into the boxing history books. The number two WBO ranked 27 year-old is confident he has the skills to overcome ‘Speedy’ Sheedy.

“This is a great fight for me,” said undefeated Langford. “Sam is a good boxer and has one of those styles that can make life very difficult for anyone so I will have to get it right on the night. He’s only lost once in a fight that he should have one. I’ve watched it back and it was an unlucky decision against Navid Mansouri. He poses a lot of threats but I am very confident I can get in there and get the job done.

“Having the opportunity to fight for the British title is phenomenal for me and it’s a great chance to propel myself on to that next level. This is a chance to put my name in the history books and I won’t be letting it pass. Cardiff is becoming like a second home for me! I have huge number of fans coming down for this fight again; close to 2,000. It’s a massive bill and the fans are in for a treat!”.