Leading Liverpool coach Danny Vaughan hails from a family steeped in Merseyside boxing for over a century and, in tandem with Dad George, has schooled some of the finest Scouse talent of the modern era, writes Glynn Evans.

Nevertheless, he claims that, in terms of core ability, none come close to perennial light-middle prospect Joey Selkirk who re-surfaces after his latest eight month hiatus in a six rounder at Manchester Arena on Saturday night.

‘Me dad and meself have worked with most of the top amateurs who came through the Rotunda club like Andy Holligan, Derry Mathews, Paul and Stephen Smith plus other champions like Peter Culshaw and Gary Thornhill – too many to mention.

‘But any knowledgeable Scouse boxing man will tell you Joey Selkirk has more natural ability than any other boxer to come out of Liverpool over the last 20 years,’ claims Danny, who trains the 13-0 six footer at the rising MGM Gym in Marbella, Spain. 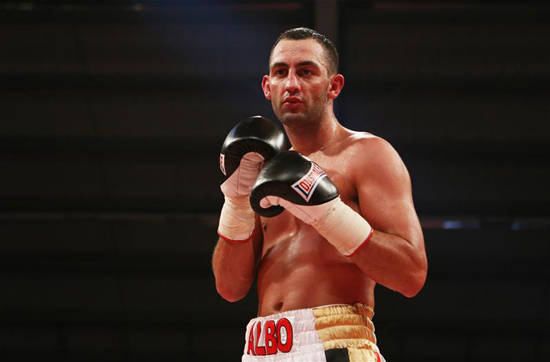 ‘I’ve known Joey since he was about 16 and all Liverpool knew he was going to be something special when he knocked out (future Olympic medallist) Anthony Ogogo in the 2007 ABA semi-final. Yet as a pro, believe me, he’s still to go above second gear.

‘The kid’s got every shot in the book. And though he’s the most lovely, laid back lad you’ll find away from the ring – never bad mouths or calls out opponents – his punch power is truly frightening. The kid’s like a Scouse Tommy Hearns, so at home in the ring, capable of sending you to sleep with either hand.

‘We can’t get any light-middles or middleweights to spar him for more than a day because even the top kids can’t lay a glove on him and Joey really hurts them, even with big 16oz gloves on.’

In a pro career that dates back to June 2008, the quiet, almost reclusive Selkirk has dispatched seven victims inside the requisite number of rounds. However, injury and out-of-the-ring shenanigans have restricted his opportunities and he is still to venture past round eight. And now that Joey’s 30th birthday is history, coach Vaughan knows the time has come to unlock the shackles.

‘Joey knows that 2016 has to be his big year. Any more injuries and I fear he’ll pack in. Hopefully now that both the MGM Grand and Frank Warren are fully behind him, he can be fast tracked into the big fights his talent undoubtedly merits.

‘There’s talk of a fight with (undefeated Wembley ‘Hellraiser’) Gary Corcaran early next year and hopefully, we can pick up both the British and Commonwealth titles (to be debated by Liam Williams and Kris Carslaw on Saturday’s ‘X-Mas Cracker’ bill).

‘It’s only his incredibly close friendship to (current WBO king) Liam Smith that keeps him from challenging for that world title right now but, injury free, I’d happily put Selkirk in with anyone. Anyone!’