Fifty years ago this week Bob, Arum promoted his first fight, Muhammad Ali’s heavyweight bout against George Chuvalo on March 29, 1966, in Toronto. Half a century on he is still arguably the best at what he does. At 84, he’s showing no signs of slowing down, much less putting his feet up. 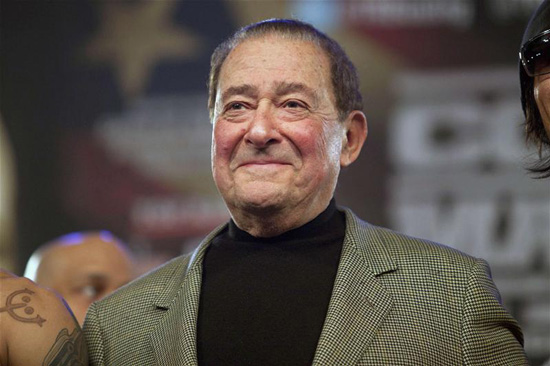 “Why should I quit?” he asks. “As long as I can talk and get on a plane, I’m going to keep working.”

That’s my man! In a career that has spanned six decades, Arum’s name has become synonymous with boxing not only Stateside but around the world, from Las Vegas to China.

Bob is the Barnum of boxing, is a past master at banging the drum and he is still in there fighting his corner and more often than not winning on points.

Bob has presented world championship events on every continent other than Antarctica. And there is barely a star in the fight game’s firmament that he hasn’t promoted.

Last Tuesday, a dinner was held in Toronto, scene of the first fight he promoted, to honour his many accomplishments.

Harvard-educated and trained as a lawyer when John F Kennedy was elected US president he joined the Justice Department and was a prosecutor, head of the tax division in the New York area.

He was an ambitious young man and it was this post that inadvertently started his love affair with boxing.

Robert Kennedy, who was his boss, had him seize all the funds from the Floyd Patterson-Sonny Liston heavyweight fight in 1962. It was a little over $5m USD. He recalls:”In those days people just hadn’t seen money like that. So that was when I first made contact with boxing – and when I first thought I might be in the wrong game.

“I was investigating the conduct of a promoter named Ray Cohn and that is how I became interested in boxing. Until then I had never seen a fight.”

Arum didn’t have today’s hi-technology at his disposal to promote Muhammad Ali in 1966 (not that there as any need to !). There was no Internet, no social media, no mobiles or tablets. Newspapers were the main source of disseminating information, and Arum built relationships with virtually all the boxing writers and sports columnists from coast to coast.

He did his first Las Vegas hotel fight in 1978 when Ali fought Leon Spinks at the Las Vegas Hilton. From there, he forged a relationship with Caesars Palace, and latterly the MGM Grand, where many of boxing’s most memorable fights have been staged.

Possibly his toughest negotiation came a year ago. As Pacquiao’s promoter, Arum was determined to make the best deal possible for his fighter to get into the ring with Mayweather in what had been an eagerly anticipated showdown between boxing’s two biggest names.

But it also meant doing business with Haymon, who was Mayweather’s adviser, and with whom he has ongoing litigation. 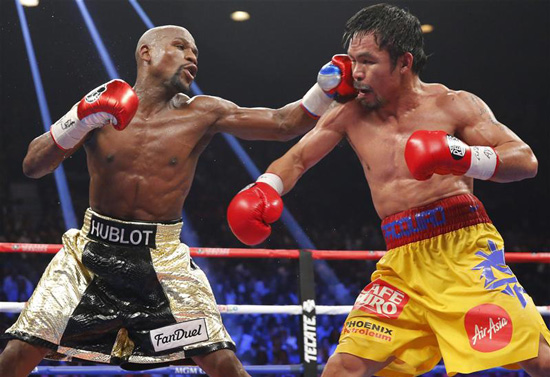 But, as they say, business is business,The deal was finalised, and the May 2 megafight produced boxing’s biggest-ever live gate — $72.1 million — as well as the biggest pay-per-view numbers, $440 million. Both sides did well financially even though the fight didn’t live up to expectations.

Now ever-busy Bob is beavering away with his latest promotion – what may be Pacquiao’s valedictory appearance against Timothy Bradley in Las Vegas on Saturday week.

He and I have co-operated on fights from Manchester to Madison Square Garden and I like to think we have a mutual respect for each other. I certainly have a lot of respect for him because he’s the maestro, the doyen of our game. He is very creative and is exceptionally clever at what he does.

We have been friends for years. It is a friendship that as survived quite a few arguments and some tough negotiating. He’s brash, he’s forthright and he drives hard bargain but he is someone you can do business with unlike some I could mention.

He knows how to work the media, too. I still chuckle at his oft-quoted comeback when he was asked to explain why he had said one thing at a press conference the day before and then totally contradicted it the next. ”Yesterday I was lying,” he said. “Today I’m telling the truth.”

Tomorrow in Hubbard’s Cupboard: Who do you think you are kidding, Mr Eubank?