TRAINER GRAHAM EVERETT: “I’D LOVE TO GET RYAN WALSH BACK INSIDE A RING WITH LEE SELBY.”

Liam Walsh might have won the family race to bag British and Commonwealth titles but he can expect a stiff argument from twin brother Ryan as the gruesome twosome chase major international honours in 2016.

In late September, the siblings made history as the first set of twins to simultaneously hold British titles when Ryan nailed the featherweight crown – adding to Liam’s super-feather strap- with a gritty 12 round decision over Hull’s Samir Mouneimne at Wembley.

And coach Graham Everett who has coached the pair since they were schoolboys insists Ryan possesses all the necessary hardware to join his brother as a leading world contender. 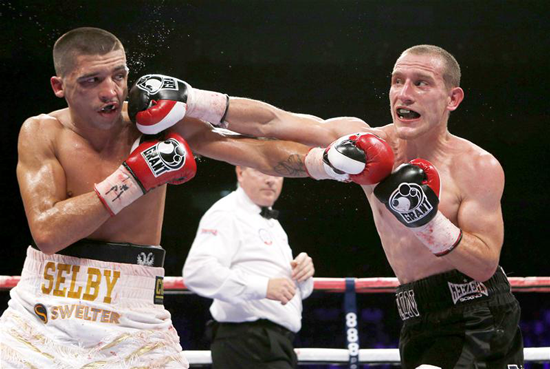 ‘We’d love a chance to get back inside a ring with Lee Selby,’ says Everett who was formerly associated with Herbie Hide, Jon Thaxton, Sam Sexton and the twins’ elder brother Michael.

‘Ryan showed that he was bordering on world class over two years ago when he gave (reigning IBF king) Selby 12 very close, hard rounds for the British and Commonwealth titles.

‘No one else wanted to fight Selby at the time yet it was only experience that beat Ryan that night. It was Selby’s seventh 12 rounder on the bounce whereas Ryan was having his first.’

Graham first became acquainted with the twins when, as 14 year olds, they landed at his Norwich gym in search of sparring as they prepared for national junior championships.

He recalls: ‘Along with Michael, they arrived as a three and they’re different to any group I’ve ever come across. They all have a position in the dynamic. Michael is definitely the head while Ryan is the quietest, most reserved, very much the dark horse. But if you have an argument with one Walsh, be ready to have an argument with all three. They think as one. They’re very, very tight.’

While Ryan (19-1-1) can boast two more pro fights than his twin, he had to endure five frustrating years watching lionhearted Liam enthral inside championship rings, before finally receiving a break of his own.

And Everett acknowledges it wasn’t easy: ‘Liam came to the fore much quicker, winning the Commonwealth title back in 2010 and receiving massive attention locally.

‘But I don’t think Ryan was ever jealous. He always served as Liam’s chief training partner, no grumblings. They’re both 100% sportsman. Everything they do, they view as a challenge. It’s the competitiveness that was nurtured in them by their late dad John that makes the Walsh brothers what they are.’

Though Liam’s aptitude for war mongering perhaps makes him more marketable than Ryan, coach Everett cautions that it won’t necessarily take him further.

‘Yes, Liam is naturally more exciting but Ryan’s defence is meticulous and that makes him very, very difficult to beat. He gives nothing away and he wastes nothing. Several bigger championship level fighters simply can’t touch him in sparring,’ he says.

‘Like Liam, Ryan’s a very natural switch hitter but possibly his biggest attribute is that he’s a perfectionist. He’s never had a drink in his life and he eats, sleeps, breathes boxing. His preparation is meticulous for every spar, every track session and he studies tapes of opponents in great detail.

‘As happens so often, winning a major title has given his confidence a massive boost and he’ll definitely be an even better fighter because of it. He’ll need to be if he intends remaining British champion.’

Now ranked 13th by the WBO, Ryan kick starts his 2016, campaign with a maiden defence against Aberdeen’s Darren ‘Trayn Wreck’ Traynor on January 22nd and the voluble ‘Farmy Army’ should ensure that the York Hall, Bethnal Green is rammed and rocking!

‘Now he’s finally champion I expect Ryan to really build. I’d love to see him win the Lonsdale Belt outright and add the Commonwealth and European belts (both held by Leeds Josh Warrington) over the next 18 months,’ says Everett.

‘I’ve seen a few little bits of Traynor on You Tube. He looks decent and apparently was a good amateur. What we do know is that he’ll arrive with the confidence of an unbeaten fighter and he’ll be treating it as his personal world title fight.

‘Ryan is treating him with great respect and I guarantee he’ll be 100% ready.

Remaining tickets are available from Ticket Master at www.ticketmaster.co.uk and 0844 844 0444