Triple G to show why he’s such a stunning force

It’s another biggie on BoxNation this weekend with Gennady Golovkin, the smiling assassin from Kazakhstan who is fast becoming one of the world’s favourite –and most fearsome – fighters in a top notch title defence against the similarly unbeaten American Dominic Wade. 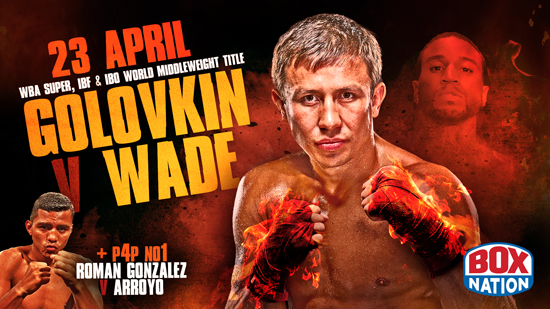 Triple G puts his ‘Super’ WBA and IBF World Middleweight titles on the line against Washinton’s Wade (18-0) at the LA Forum, which sold over 8,000 tickets in the first week of going on sale.

After wowing a packed house at Madison Square Garden with his destruction of David Lemieux back in October on BoxNation to pick up the IBF crown, Golovkin now returns to the Forum where he sold out the arena against Willie Monroe last May.

So it seems Golovkin is well on the way to winning another fight – to become the Number One attraction in the US, where he is now based. He’s done well for a foreign fighter, attracting substantial live gates, but he has to translate that into pay-per-view.

What he has going for him is such an exciting style. The more I see of him, the more I like him.

The US public are looking for a new main man. They were turned off by the dismal Mayweather-Pacquiao fight and, although Manny fought well in his last bout against Timothy Bradley, a lot of people lost respeect for him because of some of the ill-judged comments he made before the fight.

Golovkin is already a big hit, as well as a big hitter, and if he dispenses with Wade, as I suspect he will, he’ll be even bigger.

But I expect the 26-year-old Wade, who had a terrific amateur record and has a 67 per cent ko ratio as a pro, to put up some stiff resistance – for a while.

He has been decked so can be caught, and when Golovkin catches ‘em –they go!

You can bet Billy Joe Saunders will be keep a watchful eye via BoxNation The WBO middleweight champ. He has never wavered from his belief that he can be the one to topple Golovkin at some time in the near future.

With the Saul Alvarez-Amir Khan fight booked for May 7 there’s another big fight for Golovkin if Canelo wins – that would be a real blockbuster. Actually, the winner of Alvarez-Khan must agree to meet Golovkin, otherwise they will be stripped of the lineal middleweight title.

The thing I really like about Golovkin is that he can do what I love to see in any boxer – and that is actually box. There was a time in a few of his fights when he stopped doing that and started shipping a few shots to land a few. But now he is back to his boxing and he’s got what everybody wants to see, which is a pure knockout punch.

For third time in succession he appears on the same card as another of the world’s most gifted ring practitioners – the Nicaraguan flyweight sensation Roman Gonzalez who is an equally exciting box-fighter.

At 44-0, the supercharged WBC champion is well on the way to beating the 49-0 unbeaten record jointly held by Rocky Marciano and Floyd Mayweather jnr.

In a joint double header ‘Chocalatito’ Gonzalez, who many argue is the best pound-for pounder around today – defends his title against Puerto Rico’s McWilliams Arroyo, a former world amateur champion with a powerful dig that has brought him 14 ko’s in his 16 victories.

These super-fights, of course, are another coup for BoxNation. After that we have exclusively, Canelo-Khan, Deontay Wilder v Alexander Povetkin and then on July 9, Tyson’s Fury’s return with Wladimir Klitschko in Manchester for what is the real heavyweight championship of the world.

We are proud to be regularly featuring the best n boxing. Truthfully, there isn’t any other TV station in the world who are delivering the fights that we do.

BoxNation coverage begins at 2am Sunday. For more details go to: www.boxnation.com

Talking of quality fights and fighters on BoxNation, I was impressed with welterweight Errol Spence jnr and the manner in which he disposed of Chris Algieri in five rounds last week. Stopping Algieri was something both Manny Pacquiao and Amir Khan failed to do. Spence is certainly a new force in the division and IBF champion Kell Brook would be advised to steer well clear of him.

He is a southpaw, a lovely mover who knows how to deliver real good hooks to the body. It was a clinical performance and Spence showed that you don’t have to win medals at an Olympic Games to come through in the professional ranks. I think he is destined for really big things.